Recording With An 8-Channel Interface.

These days it seems that almost everyone has a digital audio workstation (DAW) and a common 8-channel interface from Avid, MOTU, Edirol or some other manufacturer.

Believe it or not, these small, inexpensive rigs pack more power than The Beatles ever had during their heyday (yet they sold over 1 billion records), and we can easily put that power to work when making a simple 8-track recording.

While many of the interfaces actually have more than 8 inputs if you combine the analog and digital inputs (plus some secondary inputs for aux or 2-track returns), we’re just going to use one set of eight for this illustration to keep things simple.

After all, the idea is to make a multitrack recording that’s easy to set up and as seamless as possible.

Track Layout
Since there are a limited number of inputs, the track assignments for the various instruments and vocals have to be thought out carefully in advance. 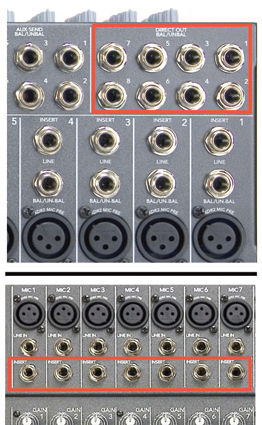 Usually the rest of the drums will be picked up by the stage microphones, especially if the band is on a small stage, so while this isn’t ideal, it does provide a measure of control over the most important elements.

A separate “kit” mic placed a foot or so above the drummers head and aimed at the middle of the kit is a better way to go if it’s possible, but this discussion is focused on making things easy.

How do you get these mix elements separated out? Almost all mixers and consoles at just about any price past a few hundred bucks these days have either Direct Outs or Inserts on each input channel. 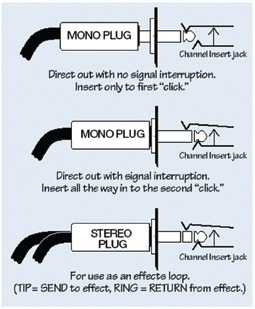 A Direct Out does just as it’s name says, serving as an output from only that isolated channel that’s usually intended for recording. Just plug that into your interface for the lead vocal, kick, snare, and bass.

If there is not a Direct Out, it’s almost certain that there’s an “Insert” on each microphone channel (Figure 1).

As you’re no doubt aware, an Insert jack allows insertion of a device like a compressor, delay or reverb only on that channel, but it can also be used as a direct output. The trick is to push the plug in only halfway (Figure 2).

Bobby Owsinski is an author, producer, music industry veteran and technical consultant who has written numerous books covering all aspects of audio recording. To read more from Bobby, and to acquire copies of his outstanding books such as The Recording Engineer’s Handbook, be sure to check out his website at www.bobbyowsinski.com.
All Posts
PrevPreviousElation’s Wireless Event Cylinder Offers Unlimited Design Possibilities
NextHow To Tame The DAW Live Recording MonsterNext
Study Hall Top Stories
Explore All Study Hall