Recording With An 8-Channel Interface.

Variables & Options
What if you have two guitars and two background vocals (or more)?

You have four musical elements to record but only two additional input channels on your interface.

The answer is to use the “Sub-Groups” that you probably also have on your mixer or console (Figure 3).

Route the guitars to a sub-group and plug the output of the group into your interface, then route the background vocals into a second sub-group and send that to another channel of the interface (Figure 4). And that’s it.

To finish the recording, place an audience mic about midway between the stage and back wall of the venue pointing towards the stage.

The audience mic will not only pick up the audience response, but should also give the track a little “glue” by helping to balance everything together with some of the sound off the stage. 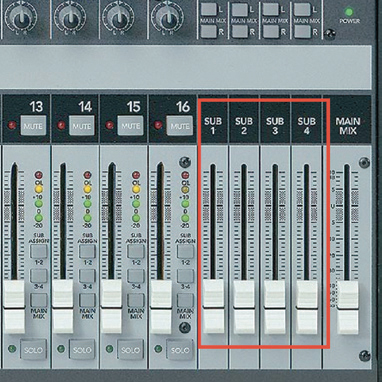 Don’t add too much though, as a little goes a long way. Don’t forget to align the time of the audience track with the others in the DAW to keep the sound punchy and eliminate any possible phase cancellation (see Live Sessions from the May 2010).

Time To Mix
You’ll want to take a different mix approach for a live recording than for a live mix, and different from a studio recording for that matter.

In the studio, some engineers usually start their mix with the drums (either the kick first, but sometimes the snare or overheads), bass, or vocals. It all depends on the song or the particular preference of the engineer.

In live recording, it’s better to not be as stringent on where you start the mix from, since it could lead to emphasizing the track with the weakest performance. Rather, what you’re trying to do is shift the attention to the strongest track. 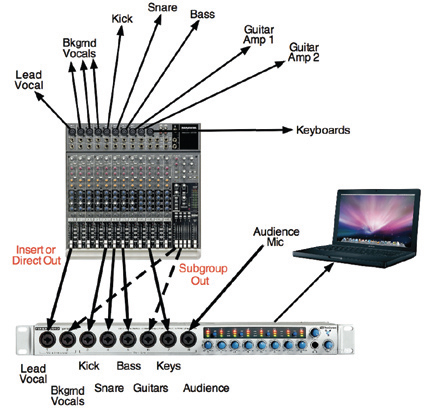 Even though an 8-track mix is fairly simple, figure out the tracks that are the weakest and don’t add them to the mix until almost last (the audience track will be absolutely last).

If the drums are a little floppy execution-wise, start with the bass and keep that in front (just like in 1960s rock/pop records).

If the vocals go a little “sideways,” keep them lower in the mix. At all times, mix to your strengths, de-emphasize your weaknesses, and bring the audience track in last to add the “glue”.

Next time I’ll discuss the one element that truly makes a live recording “live” – the audience mics.

Bobby Owsinski is a veteran audio professional and the author of several books about live and recorded sound.

Bobby Owsinski is an author, producer, music industry veteran and technical consultant who has written numerous books covering all aspects of audio recording. To read more from Bobby, and to acquire copies of his outstanding books such as The Recording Engineer’s Handbook, be sure to check out his website at www.bobbyowsinski.com.
All Posts
PrevPreviousElation’s Wireless Event Cylinder Offers Unlimited Design Possibilities
NextHow To Tame The DAW Live Recording MonsterNext
Study Hall Top Stories
Explore All Study Hall