Ghost In The Machine: Phantom Power

Clearing up the mysteries about phantom power -- what exactly is it, and how do we apply it effectively?

This article is provided by Bartlett Audio.

Unsure about phantom power? Let’s clear up the mystery. Nearly all mixing consoles and audio interfaces provide phantom power at their microphone input connectors. Most condenser mics need phantom power to operate, so you simply plug the mic into the mixer to power it.

But the ways we use and connect phantom power can make a big difference in how well those mics work. So what, exactly is phantom power, and how do we apply it effectively?

Understanding It
Phantom power is DC electrical power that is sent to a condenser mic through its balanced mic cable. The mic receives power from, and sends audio to, an audio device along the same wires. It’s called “phantom” because the power does not feed through a separate wire; it’s “hiding” in the mic signal wires inside the mic cable.

In all cases the phantom power appears at a female XLR mic input connector. Technically, phantom power is a positive voltage (12-48 volts DC) on XLR pins 2 and 3 with respect to pin 1. Pin 1 has 0 volts; pins 2 and 3 have the same positive DC voltage.

So there is no voltage between pins 2 and 3. The cable shield is connected to the phantom-power ground via pin 1. Also, pins 2 and 3 carry the balanced audio signal. 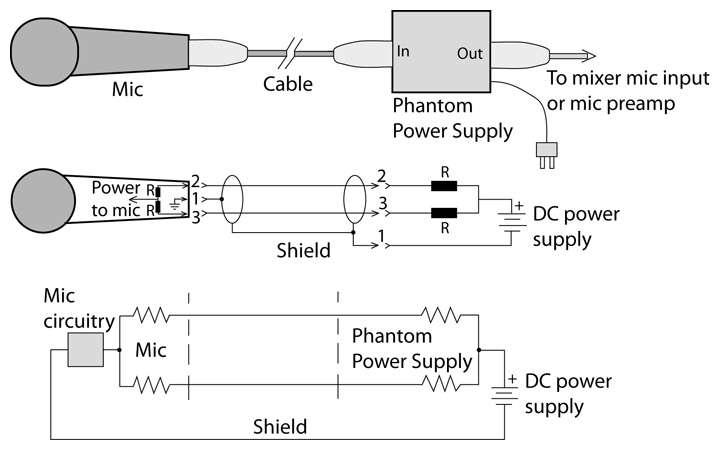 
Figure 1 (top) shows a microphone plugged into a stand-alone phantom power supply. Inside the phantom supply (Figure 1, middle) are two equal resistors (R). They supply equal voltage to pins 2 and 3 with respect to the pin 1 ground. Inside the mic, phantom power is tapped off two equal resistors (or a center-tapped transformer). Figure 1, bottom, shows how the phantom current travels through the mic cable from right to left:

2) The current travels along the mic cable signal conductors to the mic.

3) The current is recovered inside the mic and goes through the mic circuitry.

4) The current returns to the DC power-supply negative terminal via the cable shield.

The audio signal appears across pins 2 and 3, and feeds the mic preamp through some DC blocking capacitors (not shown).

In both dynamic moving-coil and ribbon mics, the voice coil or ribbon is not connected to the pin 1 ground. So no phantom power can flow through the voice coil/ribbon because there is no return path for the phantom current.

However, if the mic element is accidentally shorted to pin 1 or to the mic housing – say, by a miswired XLR connector – current can flow and damage the mic. For this reason, it’s safer to switch off phantom power for dynamic and ribbon microphones.