The Invention Of The Phonograph: From Early Recordings To Modern Time

For the purposes of introduction, the gramophone and the phonograph have been considered a single invention since the former evolved out of the latter to eventually replace it. Both were inscribing, groove based systems. The gramophone/phonograph was the keystone innovation on which the record industry was invented.

A good place to begin an exploration of the technological development of the record and the industry it spawned is in the early 1860s. This was when a Frenchman named Leon Scott, working at the Massachusetts Institute of Technology (Cambridge, Massachusetts), came up with a device called a phonautograph for tracing vocal patterns.

A thin hog’s bristle quill was attached to the centre of a compliant diaphragm at the back of a tapered horn that concentrated the sound. The other end of the quill was a sharp fine point. A piece of smoked glass would travel past the point as a sound entered the horn causing a wavy line that corresponded to the sound vibrations to be scratched into the soot.

A later version of the device positioned the stylus against a cylinder of heavy paper coated with soot. The cylinder was rotated by hand, and if someone shouted into the horn, an image of the vibrations were captured on the paper. There was no provision to manufacture Leon Scott’s device as it was not a marketable product aside from its scientific applications, but it did point the way towards later invention.

In 1877 a French inventor, Charles Cros, proposed the Phono-Graphos. He never had the money to build his idea, but it was much closer to what would become the gramophone. Cros described a method for recording on a round flat glass plate. He also suggested a means of playback. Like Scott, Cros failed to commercialize his idea because he could not see a wide market for the Phono-Graphos.

By the 1860s, telegraph and Morse code had become widely used. Two major problems were that the messages could not be stored and they could not be transmitted very far without requiring the weak signal to be listened to, copied and repeated by an operator.

One of these young telegraph operators was Thomas Edison. In the late 1860s, he figured out that you could take a magnetically actuated stylus and vibrate it up and down to emboss a waxed paper disc.

To repeat the indented message, the disc was flipped over so that the indented dots and dashes were now seen as a series of bumps of two different lengths. A “playback” stylus rode over the bumps, and, as it moved up and down, would make contact with a switch that repeated the original message.

This was the first of a long line of commercially successful inventions by Edison, whose inventiveness was only matched by his ability to develop his ideas into commercial products.

One day he heard his telegraph repeater operating at high speed and noted it sounded somewhat like music (Edison was not a particularly musical person). He took the same horn and membrane type “microphone” that Scott had invented and mounted it on a screw mechanism. This was made to travel across a revolving cylinder that had been wrapped in tin foil. When he cranked the cylinder and talked loudly into the horn a continuous groove was embossed which represented the sound.

Read More
In The Studio: The Glory Days Of Muscle Shoals

He then took the cylinder and played it back on a similar mechanism with a lighter and more compliant stylus and diaphragm. The first working model of the phonograph used an up and down motion called “hill and dale” recording and was patented in December 1877. Edison’s first recorded words to himself were “Mary had a little lamb”.

The quick success of his invention had as much to do with his marketing genius as it did with its ability to record and playback sound. Edison believed the phonograph would be used for archival purposes, not as a means of playing distributed duplicates. He wrote:

“We will be able to preserve and hear again, one year or one century later a memorable speech, a worthy tribute, a famous singer, etc… We could use it in a more private manner: to preserve religiously the last words of a dying man, the voice of one who has died, of a distant parent, a lover, a mistress.”

Within the scientific intellectual community, the phonograph was seen as a means of preserving truth and maintaining cultural stability. A prominent magazine of the time, The Electrical Review (1888), speculated:

“Had Beethoven possessed a phonograph the musical world would not be left to the uncertainties of metronomic indications which we may interpret wrongly, and which at best we have but feeble suggestions; while Mozart, who had not even a metronome, might have saved his admirers many a squabble by giving the exact fashion in which he wished his symphonies to be played.”

In 1887 Edison licensed to Jesse Lippincott to franchise the phonograph as a dictating machine. He went about setting up 33 franchises across the U.S. All went bankrupt pursuing this misconception of application, except for the District of Columbia franchise, incorporated in 1889 by Edward Easton as the Washington D.C. franchise of the Jesse Lippincott’s North American Phonograph Company.

It was one of 33 franchises set up to lease and service phonographs. All of them failed with the exception of the D.C. franchise. The D.C. operation quickly realized that the device was not suitable for dictating when, after renting a hundred units to Congress, got all of them back because they were evaluated as unsuitable for Hansard purposes.

The only precursor of the record’s ultimate commercial success was the common practice to use the voice to demonstrate the quality of the recordings. Naturally, a few demonstrations were sung, and of course some instrumental accompaniment was added. By and large, however, the first companies involved in phonographs saw the device as a business machine. It was seen as a tool for documentation, dictation and sound analysis for historical and scientific purposes and office, court, and hospital reporting. 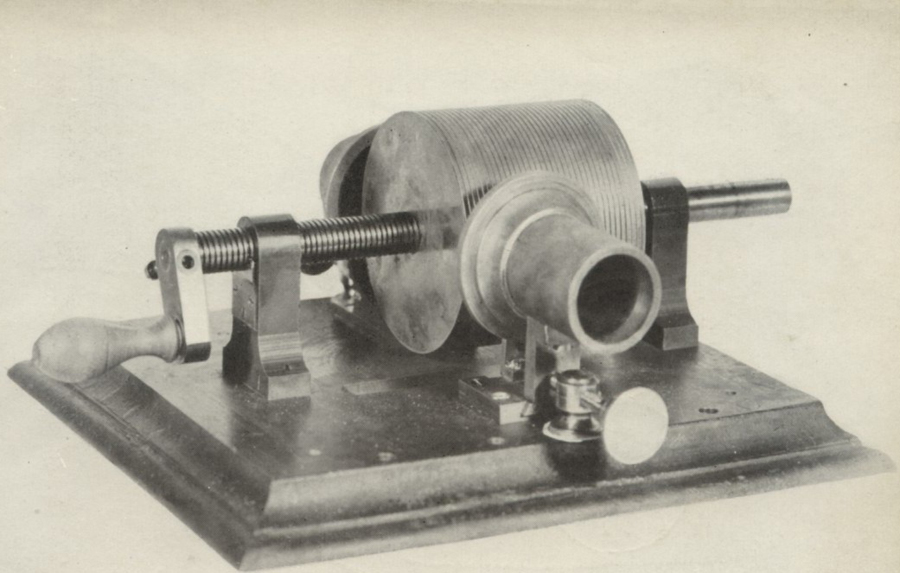 Many publications speculated on how it might have been if there had been a recording available of great events of the past and how in the future there would be such recordings. There were also descriptions of famous people making mistakes and these too became part of the record. There was also speculation that in decades to come, sound production would allow the removal of anything undesirable.

Unfortunately, the anticipated market had several problems with the device’s capabilities. The amount of time that could be recorded on each cylinder was very limited.

The recording and playback machine, out of technological necessity, evolved into different machines to optimize performance thus eliminating the notion that one machine could do both. The machines were so bulky that portability was out of the question.

Other Edison licensees began commercializing cylinder phonographs in other applications more suitable to exploit the features of the phonograph, and the Washington D.C. franchise followed suit. A market grew in amusement arcades, carnivals, amusement parks, and nickelodeons and in other public and semi-public establishments.

In a considerably less noble application, the phonograph would find a market in whorehouses. Recorded music became a common backdrop for amorous endeavour.

Although there were probably many times when the privacy of a theatre box provided a place for discrete interludes accompanied by music, and just as likely the hedonist might occasionally find a piano player in the salon of their favorite whore house, but a client needed to be a bit of an exhibitionist to perform while a live musician chorused him on. Records provided music without the musician thus eliminating a physical presence and a source of inhibition.

Tom Lubin is an internationally recognized music producer and engineer, and is a Lifetime Member of the National Academy of Recording Arts and Sciences (Grammy voting member). He also co-founded the San Francisco chapter of NARAS. An accomplished author, his latest book is “Getting Great Sounds: The Microphone Book,” available from Amazon and a range of other sources.
All Posts
PrevPreviousMartin Audio Key To Immersive Audio At New Virtual Reality Theater In The UK
NextQSC Expands Surface-Mount Options For AcousticDesign Series LoudspeakersNext
Top Stories
Explore All Study Hall