There are many “sub-groups” among pro audio folks, with two of the primary groups being live and recording.

But live mix engineers are now being tasked with interfacing recording systems and recording shows directly, whereas in the past we were usually only asked to supply an analog split off the snake for a separate recording company.

With recording increasingly becoming a regular part of our job description, let’s take a look at some of the ways to record live events, along with some of the methods I use for each.

Note, however, that my approaches are by no means the only ways to go about it.

Stereo or 2-track recording (also sometimes called room recording) involves placing two microphones where they can capture the entire sound of the performance (usually in the audience area) and a simple recording deck.

For some shows, such as a symphony in a performing arts center, this may be the best way to capture the music, as the recording can accurately reflect the audience listening experience complete with the acoustic environment.

However, it may not produce the desired results in situations where room reflections and audience noises may mask parts of the program.

When room recording, I usually place two directional microphones in an X/Y configuration (the fronts of the microphones about 90 degrees to each other) on a tall stand. These are located in the seating area, well above the heads of the audience, so they’ll pick up less noise and more program material, as well as some of the natural room ambiance.

During rehearsal or sound check, I put on a set of headphones and listen as I move the mics around to find the best spot. Omnidirectional mics – used singly – can also be a good choice.

On The Board
In live sound, we frequently see a variation of room recording called taping, usually done by fans or associates of the band. (The term, of course, harkens back to the pre-digital era, when recording was done with magnetic tape). Tapers might use separate mics on stands running into small mixers and recording decks, or some of the newer recorders that contain mics, a mixer, and file storage in one compact package. 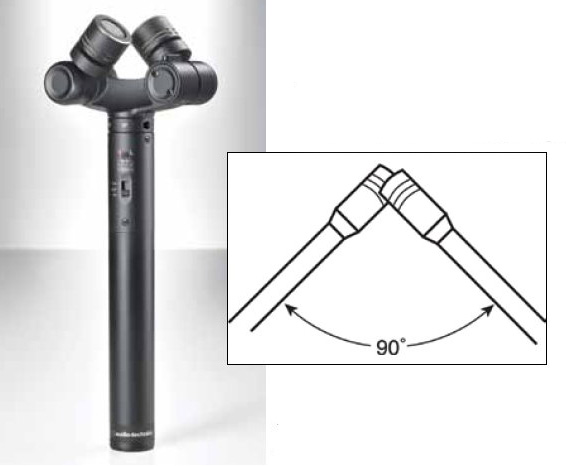 Diagram of a standard X/Y mic configuration, and inset, the Audio-Technica AT2022, with has two unidirectional condenser capsules in an X/Y configuration pivot. (click to enlarge)

Normally, we’re not involved in assisting tapers, but sometimes artists may ask that a board feed be available for those who wish to record. Note that it’s not a good idea to plug your house mix console directly into an unknown recording rig because it might introduce noise issues.

I use a press multi box (“press mult”) and provide a number of transformer isolated outputs derived from the master bus, matrix or aux outputs. If you’re using an output other than the mains, be sure to feed all channels into the recording send.

Craig has worked in a wide range of roles in professional audio for more than 30 years in a dynamic career that encompasses touring, theater, live televised broadcast events and even concerts at the White House. Currently he owns and operates Tech Works, a regional production company that focuses on corporate events based in Reno.
All Posts
PrevPreviousUmphrey’s McGee Tours With Martin Professional
NextWhat Can Go Wrong? Seven Habits That Can Ruin Your Career In AudioNext
Study Hall Top Stories
Explore All Study Hall