I got my multichannel rig set up in less than 10 minutes, but the amp rack for the center BASSMAXX subs had not yet arrived. Rosenstock and I walked the field briefly to see what the steered B2’s were doing, and sure enough there was somewhat of a hole carved out in the center.

In the meantime, I took a small measurement rig to the Bayfront Stage, with this rig consisting of the Dell Inspiron 4150 measurement notebook, an M-Audio MobilePre USB, and the Josephson microphone.

The sub line was long enough to get some serious pattern control outside the edges, and in fact this is what we wanted in order to avoid spill to the extent possible in other areas.

With this many systems, and this much sub content, any control available is gladly exercised.

The quick alignment job consisted of sub alignment via phase trace to the flown PA, some quick EQ on the PA (the d&b systems seem to never need much, particularly outdoors), and some sweetening by ear on the subs.

A 6 dB low shelf boost on the Deuces suggested by Dr. Bassenstein was applied, and after a little experimentation using Lake Contour controller, we liked what we heard.

The lack of a tech day meant that forklifts and lulls were constantly working everywhere. At one point I had my back turned to the stage, trying to figure out what was going with this crazy transfer function that could not possibly be right, noise running at a fairly high level.

I turned around and a lull had pulled up next to my measurement microphone, completely contaminating the measurement. It turned out this would be the rule, and not the exception, the rest of the day.

Back To The Main Stage
The amp rack for the center BASSMAXX array eventually arrived and we began. The first set of measurements was mostly on axis with the house right portion.

Using the multi-channel capacity of SysTune, it was quite easy to quickly switch between measurement microphones. Additionally, the easy management of overlays helped me move quickly between tasks.

Since we were short on time, our efforts were concentrated on integrating the center BASSMAXX stack with the spread CSA B2 stacks residing under each side of the PA. 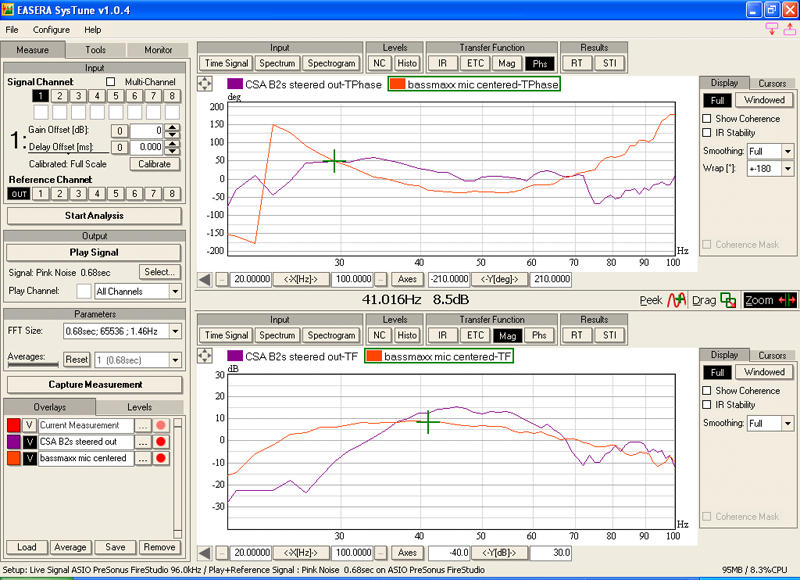 The Figure 1 screen shot shows a measurement overlay taken on site, and reloaded back into SysTune after the fact. The measurements were done with a 64 kHz FFT size, yielding 1.46 Hz frequency resolution.

This resolution is OK for low frequency work but is too fine for HF work.

Also, the delay offset and measurement levels do not affect the loaded overlays. Savvy users will notice the “zero” delay time – this is because we’re looking at reloaded overlays, not live measurements.

The previous measurement is of only the steered-out B2s, taken from the center of the audience area. The next step is to add the BASSMAXX cluster in the center as seen in Figure 2. 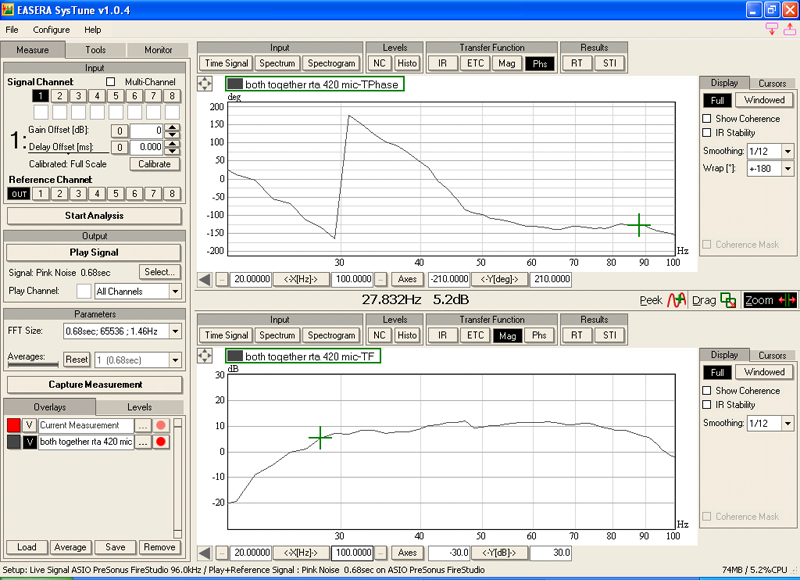 Keep in mind here we have steered the outside B2s away from the center a bit to allow the BASSMAXX boxes to have some of their own space. We have not adjusted the gain on the center sub array at this point.

Listening tests validated our original notion that if they sound different enough, we should avoid overlap if possible, and these subs definitely do not sound “the same” – whatever that means.

So in our center position, the B2s began to drop off just below 40 Hz as seen in the screen shot. The BASSMAXX subs remained quite flat to 30 Hz.

The phase angles are mostly matched, if not perfectly timed at the measurement position.

However, after listening we decided to treat the BASSMAXX array separately and Rosenstock inserted an 18 dB octave low pass filter at 47 Hz (after some experimentation), and this yielded the above result.

Note the phase response in the areas of interest, not varying more than 90 degrees between the two systems. We played with some delay times but this yielded no appreciable difference, so we left it “as is.”

Walking the field revealed a few but mostly insignificant nulls, certainly far fewer than a traditional left and right sub arrangement. This is the measured response of the summed systems, in the center of the audience area, as shown in Figure 3. 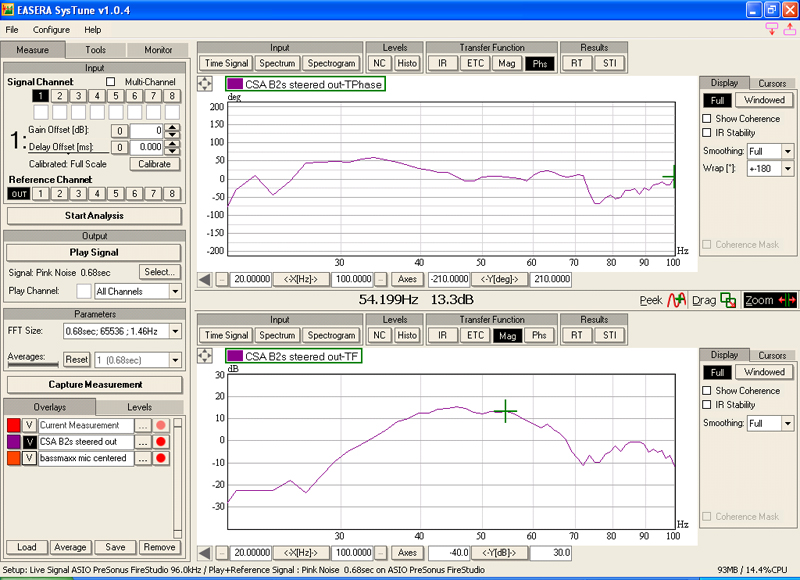 A little subsequent tweaking sweetened the very bottom end, of which a few of the DJs (and particularly The Prodigy) tested to the limits.

Overall, everyone was satisfied with the arrangement.

DJ Tiesto’s Production Manager walked the field and commented on a few minor nulls but said “it is powerful enough.” Rosenstock and I walked around a bit and decided to pull the CSA stacks back in toward the center and it did help.

The Prodigy’s Front of House Engineer Jon Burto, had a few comments regarding the implementation and offered some suggestions. He had an interesting night mixing, between artists directly in front of the PA, an artist with a somewhat weak voice that evening, and the unenviable position of not hearing the same bass response his audience was hearing.

Final notes and observations:
• The mix platform was located on an SL-100 mobile stage. In fact, the bass response “up there” was significantly different than what the audience experienced.
• The RTA-420 microphone delivered equivalent performance to an Earthworks M30 for subwoofer work. The sensitivity is different but I detected no real difference in either magnitude or phase.
• The BASSMAXX array was quite powerful. We inspected it a few times during the show and experienced blurred vision and difficulty communicating. Yes, I had my -25 dB earplugs in.
• Behind the barricade, there was complete (and I mean COMPLETE) cancellation for a small distance between the stacks.
• While mixing sub models is generally not recommended, with some careful planning and overall awareness of the issues, if you have the tools you can make it work (usually…).
• Yes, it was “powerful enough.”