The Ultra Music Festival takes place annually in the spring in Miami, concluding a week-long Winter Music Conference attended by electronic music artists, producers, and fans from around the world.

Ultra Music features performances by some of the world’s top DJs, with the festival site crammed full of PA systems from various vendors.

This year I returned at the invitation of UMF Audio Chief Terry MacNeil (“Dr. Bassenstein”) to perform alignment work on systems as a couple of the stages.

In particular, a lot of attention gets paid to the subwoofers – there’s a lot of content below 50 Hz, and the subs need to be as “right” as possible. Unfortunately, festival scheduling issues restricted my efforts to a fairly tight window..

Advance Work
The PA vendor for both the main stage and Bayfront stage was Beach Sound (www.beachsound.com). The main stage would be equipped with 32 d&b audiotechnik J8/J12, 16 d&b J-Sub subwoofers flown along the J8s, and 24 d&b B2 subs in three high CSA stacks, four stacks per side.

In addition, BASSMAXX supplied 16 beta test subwoofers currently given the model designation SP218 or the “Dub-ill 18.” These are double 18-inch direct radiating vented subs. The challenge would be integrating the centered BASSMAXX subs with the B2s flanking them.

BASSMAXX chief David Lee supplied some phase data for the new sub, and it appeared the phase response wrapped smoothly enough (for example, no abrupt variations in the operating band) that there would be a good chance of acceptable integration.

I contacted Neil Rosenstock, Beach Sound System Engineer, about “the plan” and we began to coordinate a rational approach to getting as much of the work done in advance as possible. The initial plan was to be able to use incremental delay taps for the center cluster. However, the stacking arrangement proved to be advantageous, allowing us to fill the center without beaming as much as if it had been an eight wide/two high system. 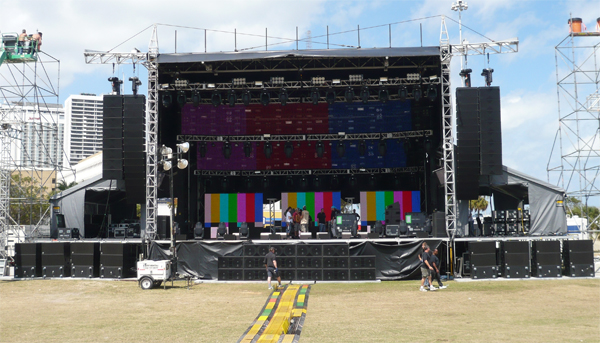 The main stage at Ultra Music Festival. Check out all of the subwoofers (click to enlarge)

Neil came up with a CSA stacking plan that would steer the B2s away from the center a bit, supplying an ArrayCalc solution that did just this.

As we shall see later, a bit less steering got it within acceptable limits out in the overlap areas.

EASERA SysTune
I decided to give SysTune a test drive for the event, so three weeks prior I downloaded the evaluation and worked my way through the tutorial.

The tutorial is very good, and anyone who understands measurement issues and has used a dual channel FFT analyzer before will be in a good starting place after completion. Particularly, I wanted to use SysTune’s ASIO multichannel capacity. 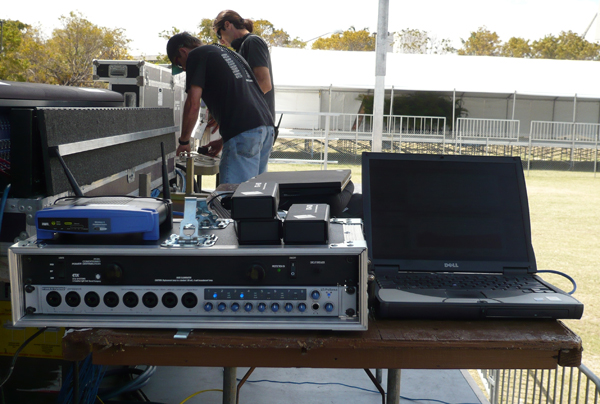 This all rides in a Pelican 1650 case. Because I was arriving on tuning day and didn’t want take a chance on an airline losing it, I used FedEx to deliver it to Beach Sound.

On With It
After some travel delays, I finally arrived at the festival site around 2 p.m. the day prior to the kick-off of the festival. Due to the schedule restrictions noted above, we weren’t able to make “big noise” until 5 p.m.