Understanding the use of a few electrical measuring tools in order to accurately and safely test stage power...

Provided by the No Shock Zone.

In part 1, we covered what voltage is and a bit on how it’s measured. Here let’s look at how to use a basic digital voltmeter to measure any power outlet or extension cord for proper voltage.

The reason this procedure is so important is that sometimes venues do crazy things with power outlets. For instance. I was teaching a seminar a while back in a “gymnatorium” and plugged in my little demo rack along with my RF headset receiver.

As I was getting ready to flip the switch on the Furman rack distro, I noticed the built-in voltmeter was pegged to the right of the 120 volt scale. Luckily, I didn’t go further and did not flip on the switch that powered the full rack.

But unluckily for my RF receiver, it was ahead of the Furman power switch so it was already “on” and burning quite brightly for a few seconds. A quick meter test on the power outlet confirmed it had been rigged for 240 volts, even though it was a standard NEMA-5 “Edison” outlet, which should always be wired for 120 volts.

The janitor told me that was his “special outlet” they had rewired for his 240-volt [floor] buffer. But it should have had a 240-volt plug and outlet, not an Edison outlet modified for 240 volts. My bad for not checking.

My RF receiver was toast. Live and learn….

Remember when you were a child and first started to help with cooking, and there were all sorts of measuring devices and abbreviations to take into consideration?

There was a tablespoon (Tbsp), teaspoon (tsp), ounce (oz.), with 8 oz. in a cup, and so on. And you better not get your tsp and Tbsp mixed up or bad things would happen to your cake.

The same types of rules apply when you’re measuring any electrical values. You just need to know how to use a few electrical measuring tools and then you’re ready to test your stage power.

At right we see a pretty typical voltmeter that can be purchased at Lowes, Home Depot or Amazon. You’ll notice a bunch of strange markings on the selection knob, only a few of which will work to measure AC voltage. 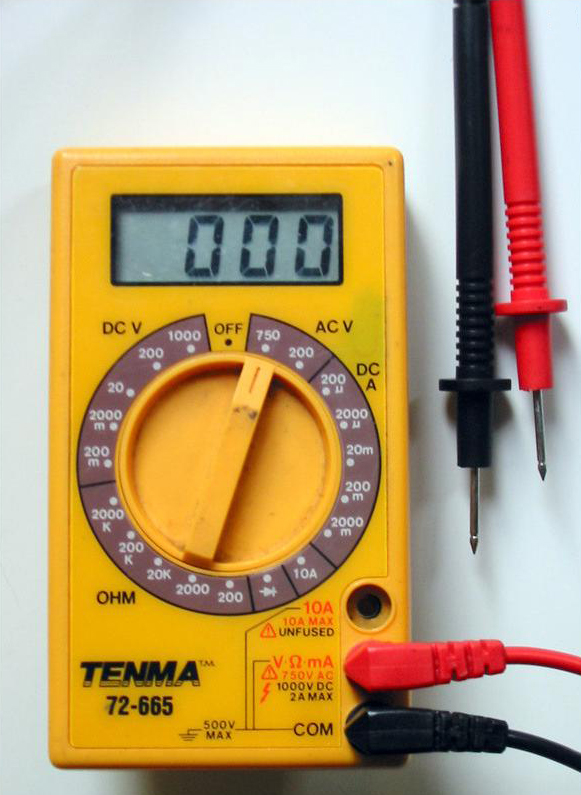 Don’t be tempted to just plug the meter leads into a wall outlet and spin the knob. That will guarantee a burned out meter (at the least). Note the markings on the control knob are divided up into four major groups.

For this article we’ll focus on the AC V group since we’re measuring the 120 or 240 volts AC in a wall outlet or stage power distro.

Never put either meter lead into the 10A socket, which is designed specifically to check current flow. Doing so will blow the internal fuse in the meter, and possibly damage the meter itself.

However, if both the red and black leads are touching 120 volts, the meter will indicate 0 volts, which is because 120 minus 120 equals 0.

See how it works?

That’s the key to using a meter. It must be connected between the two voltages you want to measure.

Since we could be reading as much as 250 volts in a standard electrical outlet, we’ll always just set this to 750 and leave it alone during all testing. If you set it to 200 and connect it to a 240 outlet, the display will probably stick on 200 Volts and start blinking.

That doesn’t hurt anything in the meter, but it doesn’t tell you the actual voltage. Many meters of this type have a 400- or 600-volt setting, so setting for 400 or 600 volts is fine as well, just as long as it’s set for something more than 250 volts.

And if you have an auto-ranging meter, just set it to read AC volts and it will figure out the proper scale for you.

Let’s start on a common 120-volt, 20-amp outlet like you might find in your living room or on any American stage. At right is what one looks like, and the connections as standardized by the National Electrical Code (NEC). 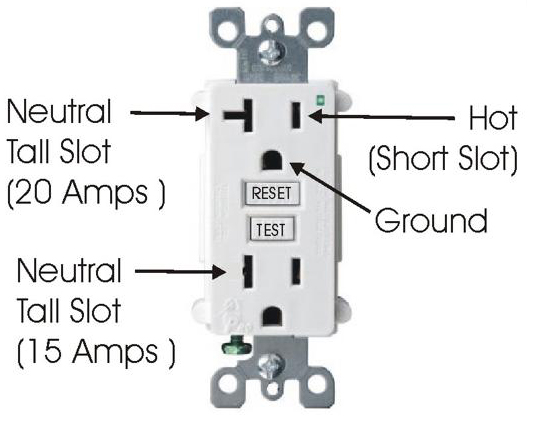 The job of the GFCI is to kill the power to the plug before it kills you, say from a hot chassis condition on your guitar amp.

Mike Sokol does sound system design and training for JMS Productions, his consulting company in Western Maryland. Visit www.livesoundadvice.com for his educational articles and videos, and email him at [email protected] with comments and suggestions.
All Posts
PrevPreviousWirebox Media Updates Salvation Army Temple With Yamaha
NextMaking It Sing: Developing A Plugin Chain To Optimize VocalsNext
Top Stories
Explore All Study Hall