Sound For The British Music Embassy

Developing compact. effective house and monitor systems for a challenging venue at SXSW in Austin...

While the British Music Embassy at the annual South by Southwest (SXSW) in Austin has consistently featured UK artists supported by systems with key components from manufacturers based in their homeland, this year’s event was marked by a different audio approach.

Latitude 30, the venue that’s been home to the showcase for seven years, provides tight quarters for a live music experience, with a total capacity of about 250 topped by a low ceiling. The previous tactic of utilizing line arrays as mains was less than optimum, so promoter Cato Music of London sought a different approach and contacted Scotland-based Tannoy, seeking a more compact, point-source oriented solution.

“We needed to provide coverage and adequate SPL for the venue, but without taking up the whole room,” notes Colin Studybaker, TC Group tour sales manager. “We also didn’t want to bring additional equipment and cabling that would require more set-up time.”

A New Thing
Studybaker and Josh Evans, Lab.gruppen technical sales manager (tour division), were onsite to work hands-on with front of house engineer Fabrizio Piazzini and monitor engineer Chris Kmiec over the 6-day run at SXSW. The team rode herd over efficient systems headed up by Tannoy VQ Series loudspeakers for the house and Tannoy VX stage monitors, both driven by Lab.gruppen amplification. 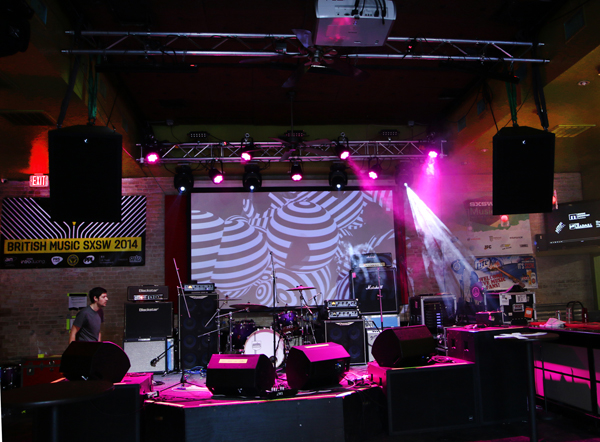 A look at the house loudspeaker set as well as the Tannoy VX monitors on the compact stage.

Just two VQ60 loudspeakers (60-degree horizontal dispersion), flown at the stage in a split parallel left/right configuration, were needed to cover the entire room, which is wider than it is deep.

The 3-way loudspeakers delivered plenty of coherent full-range output for the application, with a design that effectively combines the company’s unique Dual Concentric coaxial driver approach with a proprietary PSW (Point Source Waveguide) that aligns the acoustical centers of the transducers to produce a single coherent wavefront. Low-frequency energy is supplied by dual 12-inch woofers, and for this project, this was further bolstered by three low-profile Tannoy VS 218DR (dual-18-inch) subwoofers distributed horizontally on the deck.

Over his 15 years as freelance mix engineer, Piazzini has done FOH for acts such as Kula Shaker, Patrick Wolf, Calvin Harris and Amy MacDonald, among others. “It’s been a while since I’ve mixed a club gig, and Tannoy was quite a new thing to me,” he says. “I owned some of their studio monitors and always liked them, and Tannoy has always been very good at what they do. But these speakers (VQ Series) were a revelation. 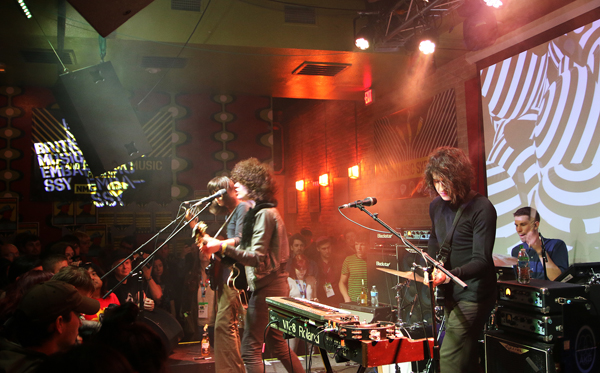 A stage-side view in concert showing one of the main Tannoy VQ loudspeakers.

“Point-source loudspeakers are not dead, and in this application, were really nice – smooth, not harsh at all, and when you walked out of the beam, it sounded natural,” he continues. “You could feel it when you weren’t in the beam, but there was still coherence, so when you walked into the venue it was a very smooth transition from the entrance to the middle where it really hit you.”

Backbone Advantages
Both the mains and subs were powered by two Lab.gruppen 4-channel PLM 20000Q amplifier/controllers with Lake digital processing, sharing just a single rack at the stage with five 1RU Lab.gruppen IPD 2400 amplifiers for the monitors. 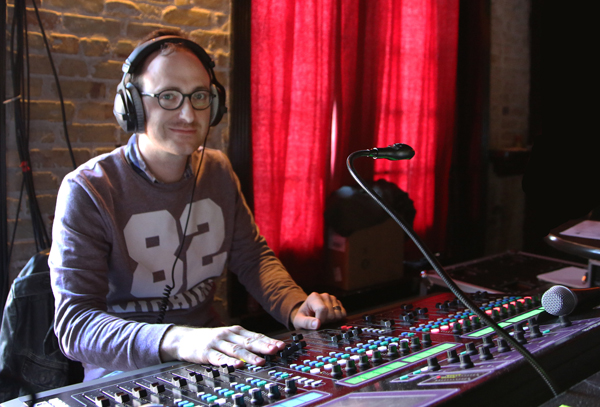 The efficiency of the amplifiers was key in avoiding any undue strain on the venue’s electrical infrastructure. In fact, the PLM amplifiers include breaker emulation limiters that limit current draw to protect the venue’s circuit breakers.

“We wanted as much power as we could get with as little current draw as possible,” Studybaker notes. “We chose the IPD 2400s based on the amount of house (AC) power available. That was a big thing because there’s no generator and we had roughly 40 amps total to tie into.”

“I mix bass heavy and like heavy mixes,” Piazzini says. “We peaked a couple of times – where we drew about 80 percent – but I never felt like the power draw was limiting me.” Adds Kmiec: “This was the first year I’ve been involved where we didn’t trip the venue power at any point.”