Sound For The British Music Embassy

Developing compact. effective house and monitor systems for a challenging venue at SXSW in Austin...

And each PLM 20000Q contains two full-featured Lake Processor modules, each offering settings for gain, delay, crossover slope, equalization, and limiting that can be applied to the loudspeakers.

Beyond the fact that they originate in the UK and thus meet one of the specific criteria for the stage, the choice of an Allen & Heath GLD-112 console at FOH and a GLD-80 console for monitors was also due to their Dante networking capability, implemented here with the addition of optional Dante cards.

“Dante was key to this project because it allowed Smaart and Lake to co-exist on the same signal platform, along with routing Dante channels to the measurement platform,” Studybaker says.

Piazzini notes that this networking approach, unveiled for the first time here, proved highly effective. “It worked seamlessly from the first,” he says, “so we could focus on the system and the job at hand rather than the infrastructure.” 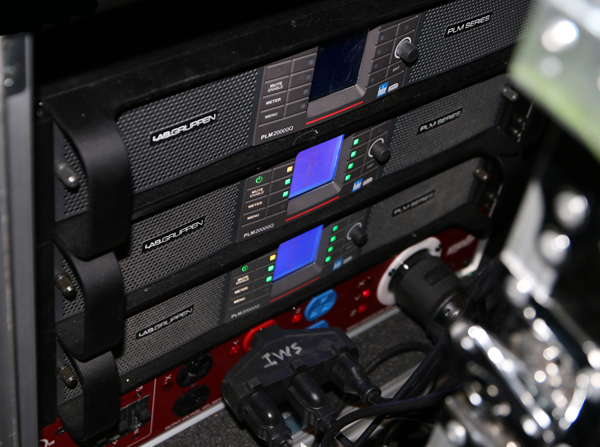 Lab.gruppen PLM 20000Q amplifiers driving the mains. Above them in the same rack are the IPD 2400s for monitors.

Limited Options
Because the venue had windows right behind FOH that open, a single Tannoy VX 8.2 loudspeaker – driven by an adjacent PLM 20000Q and time delayed to the main loudspeakers – was placed on a windowsill behind the console to cover the crowd in the street.

“I set up that amplifier so it wouldn’t pull more than five amperes, because the outlet we were using was powering everything at the FOH position,” Studybaker explains. “I could have used another IPD 2400, but it was cool to be able set a 20,000-watt amp so it pulled that little power.”

The small stage meant that stage monitoring was limited. AKG wireless in-ear monitoring systems were available, but for the most part, artists utilized five Tannoy VX 12HP coaxial monitors (bi-amped), joined by a single VSX 15DR sub for drum fill. There wasn’t space for side fill. 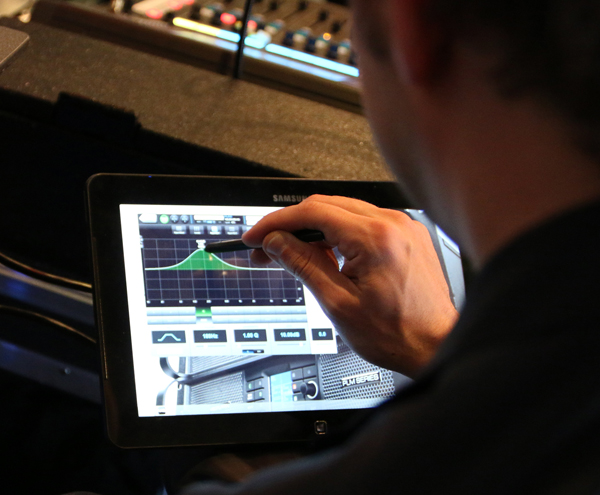 Making system adjustments via Lake Controller on a tablet.

“The VX monitors are a very clean-sounding speaker straight out of the box,” Kmiec says. “The advantage to the coaxial configuration is that they sound the same at the left and right of the speaker, which was a big advantage in a small venue like this where many band members had a single speaker rather than a pair. With a traditional format speaker, you often force yourself into using a pair per musician to get the sound even across their plane of movement.”

On stage, the microphone package was all AKG, including a D12 VR on kick, D40 cardioids for snare top/bottom and toms, C 451 condensers on hi-hat and overheads, and P4 dynamics on guitars cabinets. All vocalists were provided with D7 dynamics except drum vocals, which received a D5 with tighter supercardioid pattern to limit bleed.

In addition to his work as an engineer, Piazzini is a Waves Live product specialist, and he relied heavily on the technology during the week. “I put Waves NLS analog summing plug-ins on every mic input; a different plug-in on each input to give different flavors to the mix,” he says. The ability to use an iPad in tandem with the GLD at FOH also allowed him not only the freedom to move and to tweak the system remotely, but to do so on occasions when other engineers were setting up without disturbing their workflow. 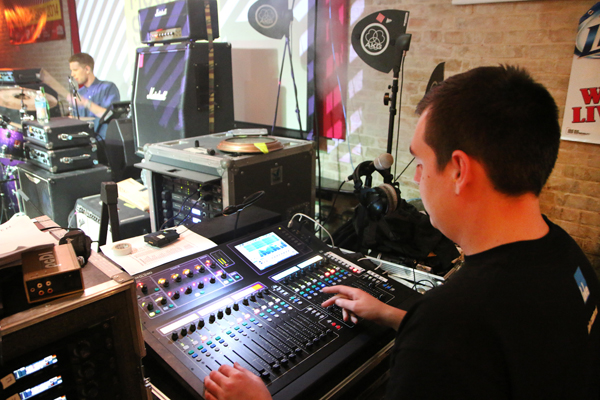 Monitor engineer Chris Kmiec at a GLD-80 in his world to the side of the stage.

“I used to mix on an Allen & Heath iLive but hadn’t used the GLD yet, so I was looking forward to it because I hadn’t had a chance to play with one before,” he adds. “It was spot on.”

In a multi-band situation, maintaining a fluent workflow and staying on schedule is also part of the challenge. “To deal with the amount of bands in a small space of time, you really have to go back to the analog mindset of how you lay everything out, with a set patch list that everyone fits into,” Kmiec says. “There’s no time during a 15-minute changeover to re-patch. The digital advantage is that you can move how these channels appear on the desk to match any preferences.”

In addition, the amount of inputs on the GLD-80 proved useful given that he was swapping between the stage monitors and IEM systems.

Most importantly, beyond ease of setup and meeting the challenges the venue presented in terms of space and power, the system was a hit with concertgoers who’d come to hear British artists like The Wytches, Slaves, Temples, and Dinosaur Pile-Up.

It did that job admirably, Studybaker concludes, adding that over the course of the six-night festival he received numerous complements. “Actually, I was told that this is one of the best-sounding venues of this size at the festival this year. We’ll be doing it again next year.”