Kahl’s Telecom & Sound of Mansfield, Ohio was called in to design and install the new sound system. Because of their long working history with the archdiocese, Kahl’s Project Leaders Tom Howell and Steve Cyrus were confident they would put together a system that would fit the aesthetics of the space, as well as provide the audio quality and vocal clarity the sanctuary required.

Part of the building renovation included adding a transept across the nave, which expanded seating for the church to 1,100. A day chapel was also added to the building, which is used as a crying room during mass and as a space to hold prayer group meetings or smaller services at other times.

Acoustically, the sanctuary was exactly what one might expect from a room adorned with marble and stained glass, flat wooden pews and a two-story tall cathedral ceiling. The reverberation was significant making it difficult for parishioners to hear the priest clearly during mass.

“Vocal intelligibility was a key component to the sound system,” explains Howell. “But for a traditional church, it offers non-traditional music. So the sound reinforcement needed to have a degree of musicality to it, as well. Lastly, in accordance with the traditional look, whatever we installed needed to blend into the aesthetics as seamlessly as possible.”

It didn’t take long for the team to figure out that a columnar line array would provide the best vocal intelligibility, aesthetics and – with the right system – the best musicality, too.

“Jon Johnson and Mark Warling from Online Marketing came in and showed us the Tannoy QFlex system and we were immediately impressed,” adds Cyrus. “We had not worked with the loudspeakers before, but they had every feature we needed and we were sure they would meet the church’s expectations.”

Tannoy’s Qflex digitally steerable column array loudspeaker system is designed to steer audio beams away from surfaces that cause reflections, making it ideal for spaces with acoustical problems. It can be directed to cover specific seating areas eliminating any bounce-back off of walls or balconies.

St. John Neumann’s has a platformed alter located at the back of the nave. Two pillars, located to the left and right of the alter, proved to be the ideal location for mounting the QFlex arrays. Two QFlex 32s were directed to cover the main seating area while two QFlex 16s covered the pews in the transepts.

“Because the Qflex 32s are just under 55-inches tall, 7-inches wide and 6-inches deep, it was relatively simple for us to install them so that they were barely visible to the parishioners,” says Howell. “The enclosure blended into the color of the wall perfectly – we installed them approximately 10 feet off the ground using the provided brackets. They are practically invisible.”

The Qflex 32 arrays are loaded with sixteen 3-inch low frequency and sixteen 1-inch high frequency drivers and designed for a maximum SPL of 100 dB at 100 feet. Given that the length of the sanctuary from the loudspeakers to the back of the church is 80 feet it was relatively simple to dial them in to cover the pews and nothing else.

Read More
Under Control: Three Common Problems With Church Sound Systems & What To Do About Them

The smaller QFlex 16s were installed on the same pillars but around the corner from the QFlex 32s. Because the depth of the pews was only 50 feet, they were more than sufficient for the space. In this case, each loudspeaker is loaded with eight 3-inch low frequency and eight 1-inch high frequency drivers.

Kahl’s Telcom was also responsible for a new sound system in the smaller day chapel and for a distributed system for the rest of the building. They installed two Tannoy DVS8T loudspeakers to handle the variety of applications the chapel hosts. The hallways and entry areas of the church utilize a distributed system consisting of thirteen Tannoy CVS6 ceiling speakers.

Lab.gruppen amplifiers were chosen to power the passive parts of the new sound reinforcement system. An assortment of E Series amplifiers rack-mounted in furniture-grade racks in the choir loft handle their duties well. The system is powered on 24/7 so the Energy Star™ certified amplifier is a nice addition.

Kahl’s Telecom & Sound also provided a new Allen & Heath GLD 112 for front-of-house, located in a balcony at the rear of the church. A Biamp Nexia SP digital signal processor provides signal routing throughout the church. An Audio-Technica wireless microphone system rounded out the audio package.

“As total system, it’s a very conservative/traditional building with a lot of technology built into it,” concludes Howell. “The Tannoy system is flexible and versatile enough to adapt to any situation – so it becomes a very contemporary space when needed, which is exactly what they were looking for.” 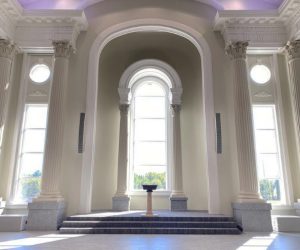