There are more factors in play in the process than at first might be readily apparent...

In live audio production, choosing a vocal microphone for a singer you’ve never worked with can be a bit challenging. The “correct” choice is the one that complements the voice and how the particular singer “works” the mic.

Another factor is providing a comfort level for someone who may be wary of using an unfamiliar mic, which shouldn’t be overlooked—a timid, unsure performance usually isn’t a good one.

Let’s first look at what we have to work with. Mics come in many types, including dynamic, condenser and ribbon. Dynamics are the most common type for live vocals because many models offer good (and better) performance characteristics in a rugged package.

Condensers have become increasingly popular in the live realm because of an often more-detailed high-end response along with a nice full sound across the frequency spectrum. They’ve also become much more durable, able to handle the usual bumps and jolts that occur on stage.

The same goes with ribbons, which were usually relegated to the studio due to fragility and lack of ability to handle high sound pressure levels. And, most were only available with a figure-8 pattern. That’s changed as well, with ribbons able to withstand normal live use while being available in directional patterns that are a necessity on louder stages. Some engineers describe ribbon mics as sounding “warm” and natural, but some models may not exhibit a flat high-frequency response like condensers.

Speaking of patterns, directional patterns are usually the first choice for vocals because they reject the often considerable output of stage wedges, fills, instrument amps, drums, etc. Cardioid is probably the most common pattern for singers, offering a wide pickup pattern but with good rejection off to the sides and rear.

Hypercardioid and supercardioid patterns also work well for singers, but may be more affected by poor mic technique—not singing directly into the mic and/or holding it, at least in part, so that the element is obscured. A subcardioid pattern can be a good choice in this regard, with a wider pattern that still offers some rejection at the sides and rear. 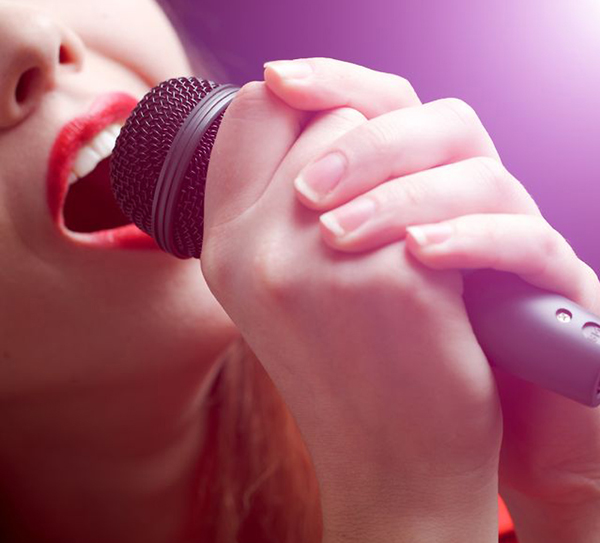 Omnidirectional patterns are usually not advised for handheld vocal applications, but they’re useful for lavalier or other miniature mics for theatrical performances. Singers in this genre may also be outfitted with headworn miniature mics that mount around one or both ears and use a small boom arm to position the mic closer to the mouth.

A similar approach is preferred by concert singers who also dance, except these mics tend to be outfitted with a larger mic element located close to the mouth since the performers are not trying to hide the fact that they’re using a mic.

Smart Choices
With so many different types, styles, models and brands, it can be a bit daunting as to where to start. The first thing I do is advance the show, finding out who is performing and if I can speak with them (or their audio folks) in order to get an idea of preferences and expectations.

Sometimes the internet is handy as well, with artist websites and YouTube offering videos/photos of them in concert that can offer clues on their mic choice(s) as well as specific vocal style and mic technique. The bottom line is that I don’t want to get to sound check and waste their time and mine in checking out a dozen different mics, and I don’t want to carry a ton of extra mics to the show to start with. Advancing the show is the way to go.

Craig has worked in a wide range of roles in professional audio for more than 30 years in a dynamic career that encompasses touring, theater, live televised broadcast events and even concerts at the White House. Currently he owns and operates Tech Works, a regional production company that focuses on corporate events based in Reno.
All Posts
PrevPreviousOutline GTO Arrays Power “The Experience” Large-Scale Gospel Concert In Lagos
NextDesign Principles For Distributed Systems: Implementing SubwoofersNext
Study Hall Top Stories
Explore All Study Hall