This article is provided by Audio Geek Zine.

Reamping is a technique used by recording and mixing engineers to process recorded audio with analog hardware, specifically guitar equipment. A reamp box takes clean direct guitar or bass signal and runs it into a guitar amp if needed later on in the production process.

The goal of the reamp box is to make the amplifier react in exactly the same way a live guitar would, but with a pre-recorded audio source. Without the reamp box there will be an impedance mismatch and loss of tone. Hearing your guitar rig play itself can take some getting used to!

How To
Once you have the clean DI recorded, set the track’s output to analog out 3 of your interface (you will need an interface with more than just monitor outputs). No other tracks should be set to this output.

Connect output 3 of the interface to the reamp box with a TRS to XLR-M cable. Connect the reamp to your pedals or amplifier with a standard instrument cable. Check that you’re getting a good signal to the amplifier, adjust the output level to match a live guitar input. If the signal is noisy, try the ground lift switch. 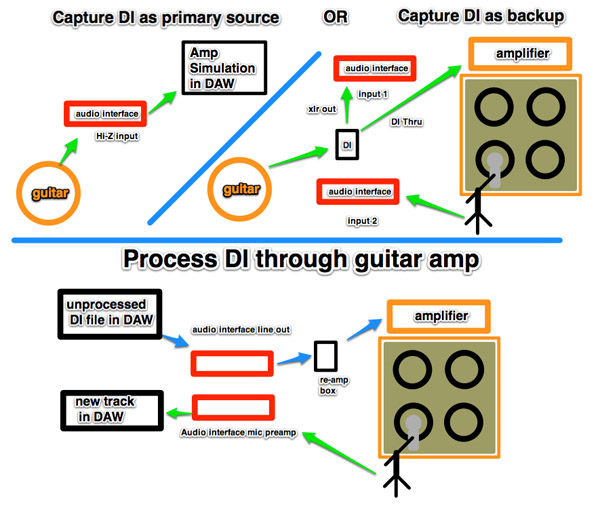 Record the amplifier as normal with one or more microphones. Double check your routing to prevent feedback.

Why Reamp?
The decision to reamp could be for a number of reasons:

Convenience: You may like to write and record guitar parts at 3 an but your neighbors don’t just don’t understand. Record with an amp simulator silently and reamp through your big rig later.

Budget: There are many professionals with big amp collections offering a reamping services for much less than the cost of even renting the amp of your dreams.

Experimentation: After you’ve got the perfect take captured you can experiment with different amp, cab, mic and positions as much as you like.

Plan B: All too often we are rushed in the studio, it’s easy to make a mistake with mic position or perhaps just a bit too much overdrive than we’d like. If the performance is fine we just have to tweak the amp.

For Best Results
While there are many fancy direct boxes, if you’re planning on reamping, you will likely find the best results are achieved through the simplest direct capture.

A tube DI or tube preamp may be too colored and change the sound of your amp. Warming up the sound of the mic on the amp, rather than the DI, is the better option. Feel free to experiment, of course.

Usually the signal you send to the amplifier will be completely unprocessed, however you may wish to experiment with gating, light compression, and EQ.

Much like the way your guitar volume affects the character of the amp, sending the right level out of your DAW can be critical.

Jon Tidey is a Producer / Engineer who runs his own studio, EPIC Sounds, and enjoys writing about audio on his blog AudioGeekZine.com.
All Posts
PrevPreviousKaho Theater In Japan Calls In Martin Audio For Livestream Events
NextChurch Sound Podcast, Episode 17: Re-Imagining The Future Of The Live Audio IndustryNext
Study Hall Top Stories
Explore All Study Hall