Fun With A Purpose: The System For A Fast-Rising Band’s Latest Tour

New York City-based indie pop band Fun (stylized as fun.) has enjoyed a remarkable couple of years, particularly since the release in 2012 of Some Nights, which saw the single “We Are Young” topping the Billboard charts in 2012 and winning Song Of The Year honors at the 2013 Grammy Awards.

That success has made a big difference in the band’s concert touring approach, with larger venues demanding a much-expanded sound reinforcement effort.

“When I came onboard in 2011, the rocket had ignited, but the band was still touring with one bus and a trailer,” front of house engineer Gord Reddy told me when we spoke a few weeks ago while he was on a break from the extensive Some Nights tour of North American sheds and arenas.

Initially after “We Are Young” hit, the band was still appearing in 1,200- to 2,000-seat venues, but soon, the tour was carrying everything but stacks and racks, and now, the production has grown to require five trucks and three buses, with a production crew of 24 to manage it all at each stop.

Audio is pretty much the only job the northwest Washington-based engineer’s ever done. “I was on tour at the age of 16, though I don’t know if I should be bragging about it,” Reddy says, laughing. He’s been mixing FOH almost exclusively since the late 1990s following a stint as a system tech for Jason Sound, and has also done tech and FOH mix work with artists such as Barenaked Ladies, Sarah McLachlan and numerous others. 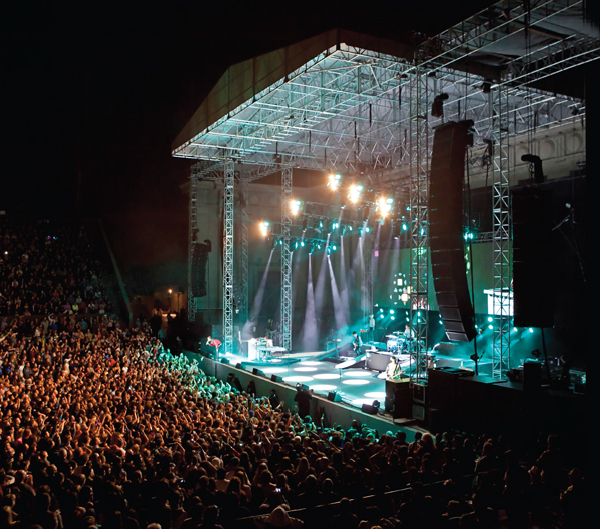 A perspective of the scene for Fun performing live at the Greek Theater in Berkeley, CA. (click to enlarge)

“In the 90s, I wouldn’t leave home without (Meyer) MSL-4s,” he states. “I got on to LEO in spring 2011, and it has a frightening amount of headroom and linearity through that gain so you can push it up without restructuring the mix or EQ-ing.”

A look at the Meyer loudspeaker set, including LEO and MICA arrays, 1100-LFC low-frequency boxes and UPQ fills. (click to enlarge)

More Direct
Typically at each stop, the sound team deploys 28 LEO and four MICA modules in main arrays comprised of 16 boxes each – 14 LEO with two MICA (100-degree horizontal dispersion) underneath for near field reinforcement. Coverage to each side is extended with MICA arrays, usually 10 deep, splayed outward, while low end is supplied by up to 12 1100-LFCs per side ground stacked (typically three boxes per stack).

“Twelve subs per side is just a scad more than I need, but gives me a lot more control and it’s fun to have that headroom,” he says. “Everybody’s crazy about bass steering right now – using propagation delay and cardioid arrays – but you need a lot of subs to execute effective pattern control. The best way to steer bass comes down to the dimensions of the baffle you build.”