Fun With A Purpose: The System For A Fast-Rising Band’s Latest Tour

Vocals are captured with Shure SM58 capsules on UHF-R wireless systems, although lead singer Ruess occasionally switches to a KSM9 capsule for his vocal, primarily to add a bit of variety.

“I haven’t been looking for more than what I get with the 58,” Reddy says, “but you get ‘sound drunk’ listening to the same stuff all the time, so we’ll go to the KSM9, then go back the other way.”

“One of the cabinets is in an ISO box to maximize the distinct and very lovely tone a VOX produces when spun-up all the way, while minimizing the issues it would create with five open vocal mics,” Rupsch explains.

The drum kit is captured with Shure Beta 91 and 52 on kick, Beta 181s for cymbal underheads, an SM57 on snare bottom, and KSM137s on snare top, toms and hi-hat. “For the kick I get some information from the 91 to provide the noise gate for the 52,” Reddy notes, “but it’s mostly the 52 for me.” Two more KSM137s placed stage left and right collect stage ambience.

Pleasing & Lush
Rupsch and Reddy both do their mixing on DiGiCo SD8 consoles. “The SD8 was a happy accident,” says Rupsch. “I’d never used DiGiCo before, and in fact was just finishing up training on the Midas PRO Series when I was approached for this job. Rather than push for a PRO Series console, I decided to give the SD8 a shot. The snapshot editing is great.” 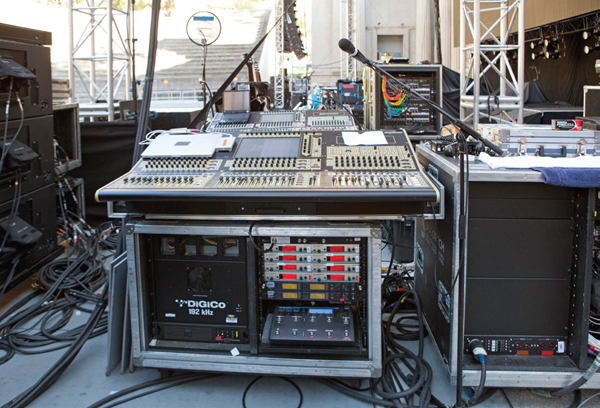 The monitor workspace outfitted with a DiGiCo SD8, Shure wireless and more. (click to enlarge)


It’s a challenging show to mix from a monitoring standpoint, he adds. “With six people on stage – five of them singing constantly – framing the overall mix changes drastically between songs, but they do a fine job of mixing themselves in many respects.”

The twin SD8s cut down on infrastructure needs in general, Reddy notes. “Previously, monitors and FOH shared the data stream out of one stage rack, so we were down to a splitter, a stage rack and two local racks. Now, the budget and truck space are there and we’re splitting copper to two stage racks so we can have independent control, and because we have a diverging input list now – a couple of click lines, audience and shout mics that I don’t use and some he (Rupsch) doesn’t use.”

Given the band’s very busy press schedule, time for sound check with them can be hard to come by, but it’s not a huge concern given the familiarity that’s developed due to the length of the tour. 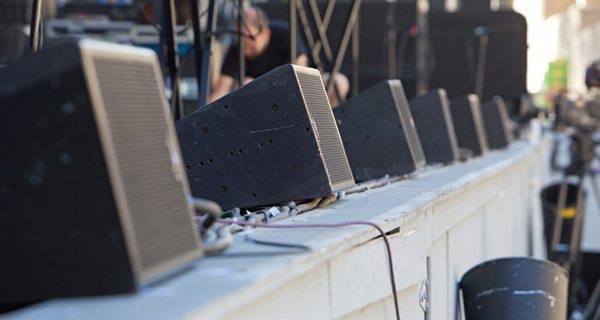 Plenty of boxes on stage deliver a “coating” of mid/high energy to the extreme near field. (click to enlarge)

Whenever possible, Reddy defaults to a virtual sound check using his PC and Reaper recording software. Prior to each show, he evaluates the system in the Meyer MAPP Online Pro predictive application, with Rational Acoustics Smaart deployed to assist with tuning.

“I keep the PA quite flat, probably brighter and with less low end than many people might prefer. Then I force the composition of the mix to give that bass back,” he concludes. “The mix coming out of the console is pleasing, thick, and lush down low, but being delivered to a pretty flat system, which gives me a predictable and structured target to shoot for every day, just like the guys in the studio making the record.”