Another day, another city, and this time Dave Kob, having just finished tuning the PA, is out at his front of house perch, looking up into the yawning maw of another arena’s dome.

It’s just an ordinary moment prior to a show until he catches sight of a sawzall blade coming through the ceiling above. “What’s going on?” Kob asks his crew chief Donovan Friedman, pointing up with a bit or urgency. “I know this is a sold-out show, but I’ve never seen fans that motivated to get in.”

Kob has worked a few shows in his time. Four decades worth, to be more precise, since he first started with Clair back in 1974. With Fleetwood Mac, he was around in the early days as system engineer, working under Richard Dashut, who engineered on Rumours and mixed the first two subsequent tours.

By ‘82 he was in the front of house seat mixing for the Mirage tour. Stints with Madonna, The Eagles, The Who, and others ensued after that, but by ‘97, Kob was back.

Following another hiatus with the band, he returned again in 2009. The ‘13 tour followed, and then this year’s current On With the Show tour that continues in North America through mid-April, marking the return of singer/keyboardist Christine McVie to the stage for the first time in 16 years.

“Yeah, so basically I’ve done a number of tours with the band spread over a very long time,” Kob says while cautiously looking for traces of sawzall dust that may have floated earthward and onto his Yamaha PM5K console. “Right now, this is the best they’ve been playing since ‘97. Having Chris back is just a wonderful thing.”

Old & New
The show today is up to two and a half hours of hits. That’s what the fans want to hear, so there isn’t a lot of experimentation going on onstage. Crowds are multi-generational, with baby boomers anchoring one end and millennials the other. Drawing upon classic analog components that preserve the band’s legendary sound, the tour nonetheless makes use of recent technology – albeit sparingly – where it makes sense.

Clair i-5D cabinets deliver the reinforcement, with power coming from a collection of Crown Macro-Tech amplifiers. “I love the i-5D,” Kob admits. “Clair initially only built two systems of it, so I had to step on a few necks to get one out here for me, and I’m not giving it back. The i-5D was basically created by taking the best from the i-5 and i-5b and joining it all together in a single cabinet. I was skeptical of the concept at first, but then I heard it and was amazed.” 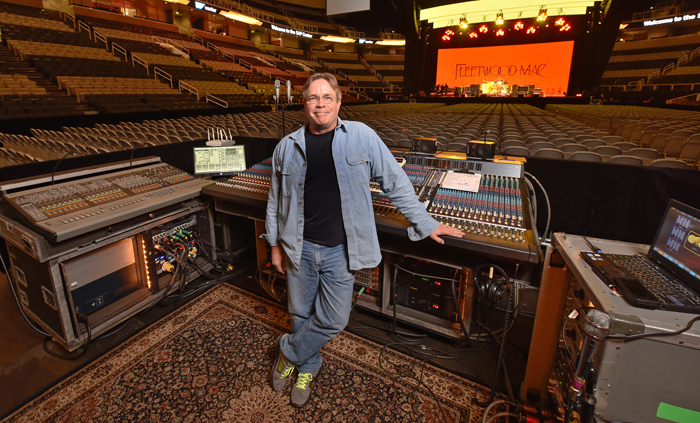 In larger venues that sell out, the crew usually deploys the whole system, which includes two hangs of 16 i-5Ds left-and-right. A rear hang normally is built around i-5s.

Matter Of Style
An outspoken advocate of analog, Kob’s Yamaha PM5000 console is the centerpiece of his ongoing endeavors. “I go to so many other shows these days and the band sounds ‘OK’ but not great,” he notes. “It seems I always find myself wishing I could hear more of this or that. I look around in these situations and there’s usually a guy standing there tweaking some esoteric plug-in compressor/dynamic generator or whatever. Rather than mixing the band, he’s playing with a video screen. 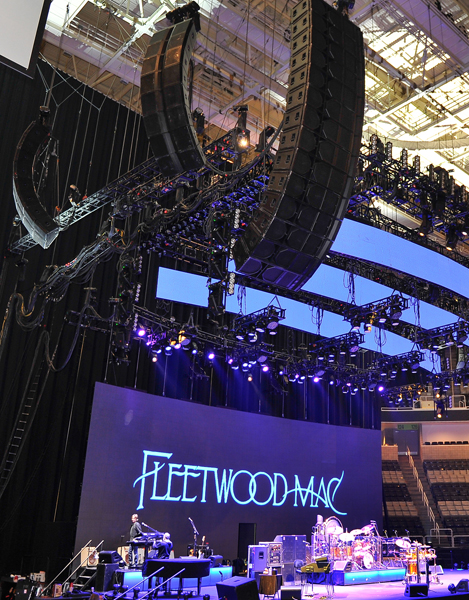 Clair arrays in the air.

“Some people are sensible about technology, others get lost in it. A lot of the guys in the latter group have 60 inputs and 110 plug-ins. Well, if it works for them, fine. But it doesn’t for me, and that’s why I stay with my PM5K. I’ve mixed tours on digital desks, but I much prefer the ergonomics of an analog console, it just suits my style.”

As a concession to the digital world, however, Kob keeps an Avid VENUE Profile at hand as a sidecar device. “The sidecar and the PM5K work together,” he explains. “I have eight tracks from the USC marching band in there for use on the song ‘Tusk,’ for example, and some other bits and pieces. I’ve built Pro Tools snapshots of everything. I fire MIDI from the PM5K that makes all the changes I need on the Profile. There’s not really too much to do with the Profile at all. Once it was programmed it was set to go.”

Gregory A, DeTogne is a writer and editor who has served the pro audio industry for the more than 32 years.
All Posts
PrevPreviousRecording Academy Producers & Engineers Wing Announces 2014-2015 Steering Committee
NextNorway’s Fosnavåg Cultural Centre Is A Shiny New Showcase For Meyer Sound TechnologyNext
Top Stories
Explore All Study Hall