His house mix comes together based around tried-and-true formulas, as you’d expect.

There is, first and foremost, the matter of overall level. In the Kob canon, level has to be exciting. You can go below that occasionally and it’s OK, but remain there and it gets boring.

He mixes loud, but a clear distinction must be made between good loud and bad loud. Good loud keeps everyone dancing, and if someone onstage is playing something, it will be heard.

“Then there’s balance,” he adds. “That’s the first critical part of actual mixing. Once you get that together and the EQ, you can animate the sound. Animation, in this sense, takes things and makes them jump out of the mix.

“I learned the art of animating sound from an engineer working with Elton John back in the ‘70s, Clive Franks. He would make a tambourine loud for two hits and then drop it back into the mix with reverb – amazing, tasteful things with a truly creative dynamic.”

The Collection
House effects on the tour are purposely basic, and period authentic, of course. What worked back in the day still does just as well today.

Distinct labeling tells the story of this front of house outboard rack.

“I use that piece for when he shouts,” Kob says, “and he can shout louder than any instrument ever made.”

Everything else within the outboard collection resides under the PM5K: a Yamaha SPX2000 for kick drum, an Eventide Harmonizer that runs on Stevie Nicks all the time just as a little “fattener-upper,” and a Bricasti M7 vocal reverb, which Kob proudly points out was built with 30-year-old technology and is still a device that many others use as a comparison point.

Other than all of this, look around further under the PM5K long enough and you’ll find a couple digital recorders and eight channels of Aphex gates on the drums. 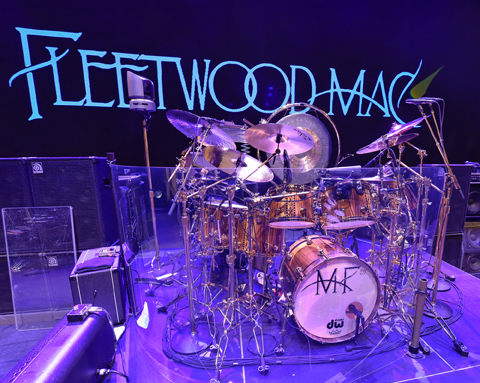 Plenty of mics on Mick Fleetwood’s kit, fronted by a plexi shield.

On the input side of the equation, there are no wireless microphones on this tour. After a lengthy evaluation of just about every hardwired vocal mic available, Sennheiser 935s were chosen for all vocals except Lindsey Buckingham’s, which are still captured by his long-time favorite Audio-Technica AE6100.

Miking elsewhere onstage includes a Shure Beta 52 inside the kick, supplemented on the outside by a Milab kick drum mic no longer made that’s one of Kob’s favorites. “The rest of the stuff is what I’ve used all the time forever as well – (Sennheiser) 421s, Milab overheads, AKG on hi-hat,” he adds.