Dual Approach
Monitorworld is a split-function affair using in-ear systems and wedges, with dedicated engineers for each: Dave Coyle for the former, and Ed Dracoules for the latter.

As unofficial tour historian, Kob recalls that when he first started with the band, “they had an amp line where there was a Leslie cabinet on one side, Lindsey had extension cabinets on his side of the stage, and John (McVie) had his bass cabinets. The only thing they had in their monitors was kick, snare, high-hat, and vocals. They listened to everything else through the backline.”

Today, with Coyle taking charge of the in-ear monitoring systems from behind a DiGiCo SD10 digital console, Dracoules manages wedges with the aid of a VENUE Profile. The artists wear Future Sonics MG5Pro in-ear drivers fed by Sennheiser 2050 wireless systems. Wedges are Clair 12AM models, deployed for Buckingham, John McVie, Fleetwood, and the band’s rhythm guitarist.

In keeping with the underlying analog nature of things, Coyle’s outboard gear is a Spartan approach that includes such things as Yamaha SPX990s and an M5000 from TC Electronic providing effects for Christine McVie and Nicks. 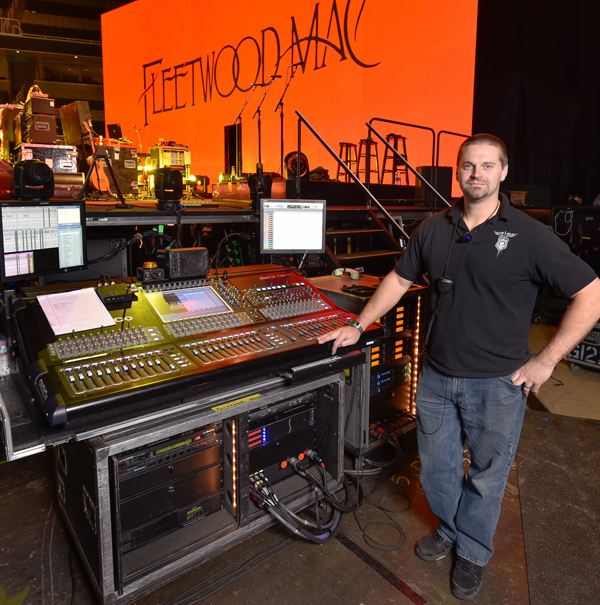 “Everything else comes from the console, which is one of the reasons I like using the SD10,” Coyle explains. “That and it offers me the ability to use dynamic EQ and multi-band compression. I don’t use a lot of any of that, but given the opportunity to run it on my Pro Tools snapshots is nice. This band likes its older effects, and when you mix older things with newer products on the same input, having this ability is a huge plus.”

Staying On Course
The production level of the show is anything but stuck in the past. With motion having become a bigger part of the show over the past two tours, moving video walls now help to visually reinforce the show, along with a large-scale fixed video wall running along the back of the stage. There are about 300 cues for the show including count-ins and clicks.

“Each member of the band essentially likes to hear a mix mirroring the sound of the record,” Coyle notes. “And despite their traditional use of effects, they do enjoy newer technologies like the Pro Tools snapshots. 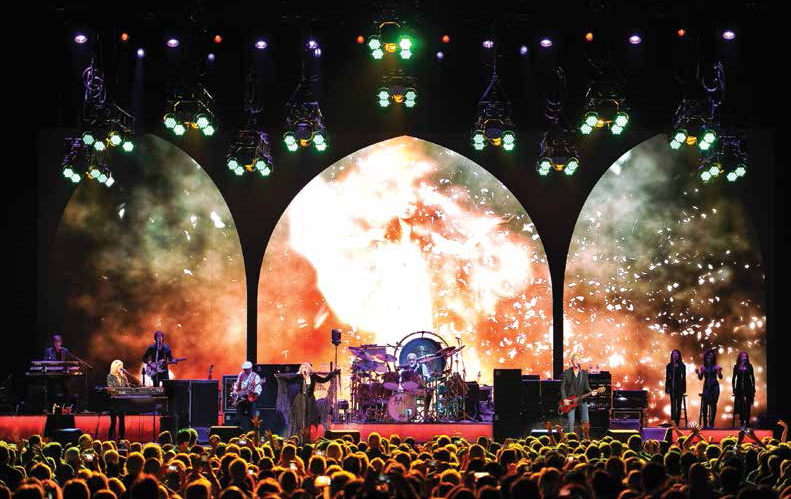 Another view of Fleetwood Mac on the current tour.

“All that said,” he continues, “to mix for this tour effectively, you can’t lose sight of the fact that these are actual inputs. They are not heavily compressed, polished, or mastered. When you turn it up, that’s what you get. You have to use your VCAs every night because these are live musicians in the most classic sense. There’s nothing programmed here, you have to mix if you want it to sound good.”

Kob concurs with Coyle’s assessment of the importance of staying on the VCAs. “There are a lot of moving pieces on this show,” he concludes. “As long as they stay in parameters that are workable for me, it’s OK. I just call that mixing, and that’s what I love to do. I don’t expect this band to come across at the same level every night. Take your hands off the helm here and things will veer off pretty quickly.”

Gregory A. DeTogne is a writer and editor who has served the pro audio industry for the past 30 years.