Charting The Mix: The Value Of Peeking Under The Hood Of A Pop Song

An eye-opening exercise that can bring us to another level of "awareness" with music, which can positively impact the mix.

As sound engineers, we’re tasked with shaping the sound of the artist’s performance. When we’re running our consoles, we’re literally “putting together the pieces” of a song into the product that the audience hears.

I’ve found that gaining an understanding of how a song “works” – how different sounds play different roles in the arrangement – helps my chances of relating the song to the audience in a way that’s enjoyable and engaging. An awareness of how different instrumental parts define the sections of a song will hopefully help those ideas translate thorough our mixes.

When I was about 13, my music teacher lent me a MIDI sound module and some rudimentary sequencing software. I hooked up my Casio keyboard to my parents’ Gateway PC and started sequencing my own MIDI tracks.

I learned how I could program 16 channels of MIDI data to control various instrument sounds, and quickly realized that a game plan was required in order to prevent sonic chaos. The 16 musical parts had to be arranged, almost choreographed, to fit with each other in a pleasing way, and it was better if there were some changes throughout the duration of the song, to make it more interesting to listen to.

My teacher showed me an exercise he called an “Arrangement Inventory,” which is a graphical representation of which instrument parts are playing throughout the different sections of a song. I was to list the sections of the song’s form (Intro, Verse 1, Prechorus, Chorus, etc.) across the top of the page, then down the left side, making an “inventory” of all the instruments I could discern in the mix.

Then I would fill in colored bars to show which instruments were playing in which section. The result looked very similar to the regions of multitrack data in a digital audio workstation’s “Timeline” or “Arrange” view. 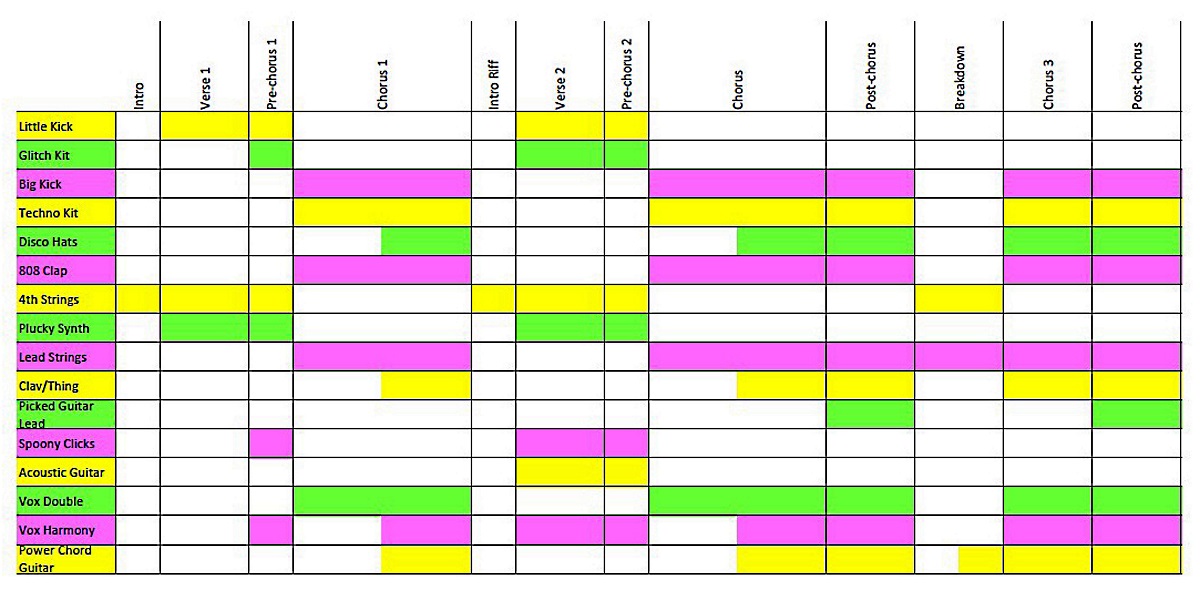 By forcing myself to listen all the way through a song while focusing just on what the lead guitar was doing, then restarting the track and focusing just on the keyboard part, and so on, I learned how to listen critically to what was happening in the mix, and the roles that each of the parts played in defining the song’s section. My teacher was trying to teach me arranging skills, but this also relates directly to what we do when we’re mixing.

I decided to revisit the exercise using what is, in my opinion, one of the simplest arrangements I could think of: Carly Rae Jepsen’s “Call Me Maybe.” To those of you who haven’t immediately flipped to a different article, I’ll admit I was surprised at the results of my Arrangement Inventory. I was able to identify 16 distinct elements in the mix that played various roles at different points in the song, an unexpected coincidence that gave me a (fleeting) urge to try to program the song on an old MIDI module.

Then I focused on each mix element in turn and charted the song section in which they played. This gave me a graphical representation of how the arrangement and mix changed as the song progressed. (Astute readers will deduce that this means I listened to “Call Me Maybe” 17 times in a row, the long-term effects of which have not been studied. It’s too soon to declare any lasting consequences, although I experienced both an inexplicable sensation of joy and an overwhelming craving for bubble gum.)

—The song uses two kick drums, which I took to calling “Little Kick” and “Big Kick.” Little Kick plays during the verses and pre-choruses, and is light and non-obtrusive. Big Kick comes in for the choruses to create that punchy, dance feel that we would expect from this genre. The change-up keeps the constant pounding of a kick drum from being overbearing or fatiguing.

—The chorus is split in half, and the second half adds more “sonic goodies” like disco-style hi-hat buzzes on the upbeats and distorted guitar power chords that reinforce the main string riff. This is a popular Top 40 pop production technique that helps maintain interest and energy throughout the chorus, and you’ll hear it put to good use on tracks like Kesha’s “Tik Tok” and Katy Perry’s “Teenage Dream.”

The song’s final chorus, however, really surprised me. Instead of ending the song with a double chorus (See: every NSYNC song), the final chorus is only half-length compared to the previous ones, with the “goodies” present the whole time. This helps contribute to the song’s light and quick feel, and keeps it from overstaying its welcome.

—There’s a lot of empty space in this mix. This is welcome at a time when the pop genre is struggling with issues like over compression, lack of dynamic range and the “loudness wars,” as they’re called. (Luckily, this hasn’t been as serious on the live end of things, although we’re certainly not immune.) Combine a mix that’s a breath of fresh air with one of the catchiest choruses since Tommy Tutone, and it’s easy to see why the song enjoyed such a huge amount of success.

Of course, we’re live engineers, not studio producers, so we have limited-to-nonexistent control over the musical arrangement, but this exercise taught me to “multitask” my listening – to be more aware of individual parts and how they interact in a mix – and to better understand how all this affects me as a listener.

The ability to listen critically can bring us to another level of “awareness” about what we’re perceiving. (On the umpteenth listen, I discovered an acoustic guitar part mixed way down and panned hard right during the second verse.). I’m sure this will help me to do a better job building my mixes in the future.

This exercise proved to be eye-opening and also was a lot of fun, and I’d encourage others to give it a shot. Just make sure you can live with your song selection, as it might be stuck in your head for a while. Maybe.

Jonah Altrove is a veteran live audio professional on a constant quest to discover more about the craft. Send him your "Ask Jonah" questions at [email protected]
All Posts
PrevPreviousThen And Now: Putting Audio Technology Into Perspective
NextComing Up On #DontStopTheMusic: Saves The Day, Oso Oso, Solardo, Sublime with Rome & MoreNext
Top Stories
Explore All Study Hall