The proper engineering term for an RTA is a “parallel filter analyzer.” A typical analog RTA is made up of 10 or 11 LED ladder displays (in the smaller one-octave-band models), and 27 to 31 LED ladders in the larger third-octave models.

The signal from a measurement mic is routed to a bank of simple analog filters, each one tuned to an ISO (International Standards Organization) bandcenter. Hence the term “parallel filter analyzer.” Each filter is independent of the other filters, feeding only its own LED display driver chip, which in turn illuminates the LED ladder that’s associated with that filter (i.e., 63 Hz, 125 Hz, and so on). See Figure 1.

When working with an RTA, the stimulus used to excite the DUT (again, Device Under Test) is almost always white or pink noise. The DUT could be an entire sound system in a large venue, or merely a component part of a system.

In any case, because of the nature of random noise (of any color), a pronounced settling time is needed to keep the LED display from constantly flickering within the amplitude range of the crest-factor of the white or pink noise source. This makes the real time analyzer almost anything but real time. 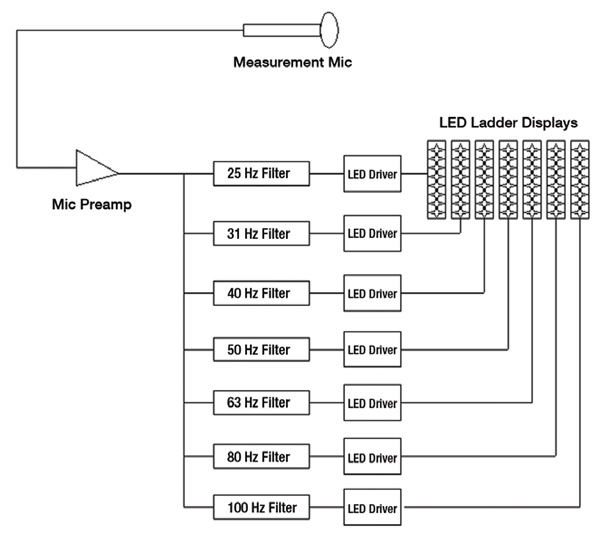 Figure 1: How a typical RTA or “parallel filter analyzer” is constructed.  A one-third octave RTA will normally have 27 to 31 filters and LED ladder displays. (click to enlarge)

When using an analog RTA it will take quite a while to view a stable response curve, especially in the low frequency region, and this can lead to substantial errors. The measurement technician walks the room, comparing the response in one region to that of another, and tries to get the tuning work finished as quickly as possible. Just another day in paradise.

But while a few seconds spent while waiting for the display to settle down may not seem like much, it drastically slows the process of capturing a response trace and later adjusting EQ to compensate for room-related acoustical problems.

Margin Of Error
Additionally, the resolution of a third-octave RTA is quite course in the LF region, and that’s precisely where high-resolution measurement and correction is most beneficial. Low-frequency room resonant modes will rarely fall smack-dab on an ISO band center, and if they do, it’s purely a random event.

When they don’t – and that’s most of the time – a considerable margin of error exists because an RTA can only resolve the data to fixed third-octave intervals. It’s all too easy to fall into the trap of flattening the response as the RTA “sees” it, but in reality actually worsening the response due to the RTA’s limited LF resolution.