Up In The Air: Factors Contributing To How Sound Behaves In The Great Outdoors

Looking at various environmental factors which can affect sound propagation that simply don't exist in the controlled indoor environment.

The most obvious difference between indoor and outdoor sound is the lack of reflecting surfaces. In my previous article, Unique Signatures, we explored the acoustic behavior of sound in enclosed spaces, so now our attention turns to acoustic behavior in the free field, i.e., outdoors.

It means we don’t have to deal with reverberation, standing waves, room modes or any of the other issues that make mixing sound indoors so challenging.

That which we perceive to be sound is actually acoustical energy traveling, as waves, through a physical medium, be it gas, liquid or solid, so when looking at live sound we’re most interested in sound propagation through air (Figure 1). We don’t immediately think of air as a physical medium, because we can’t see it, but without it there would be no sound.

The transmission of acoustical energy is achieved by adjacent air molecules vibrating backwards and forwards against each other, while the molecules do move they don’t travel with the sound, they merely bang against each other in waves of compression and rarefaction much like the suspended balls in Newton’s cradle. 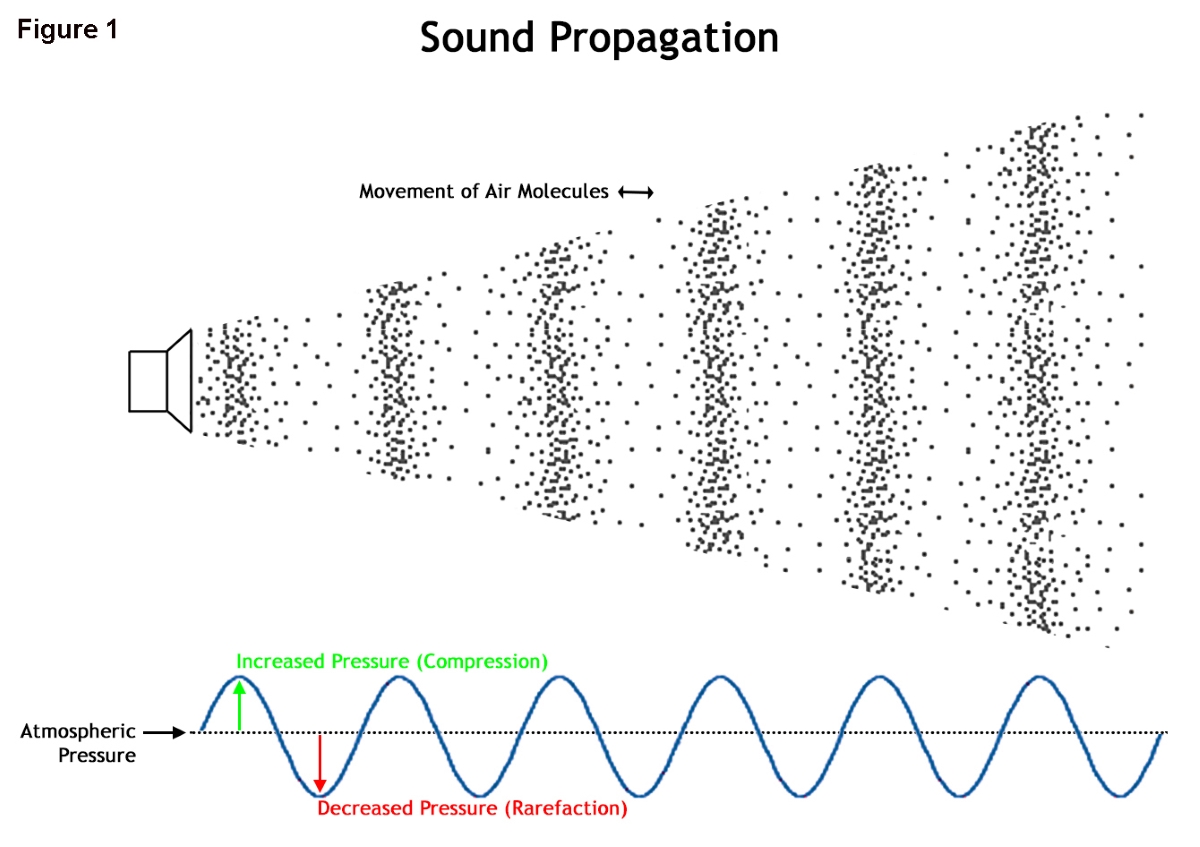 The speed at which sound travels through a medium depends primarily on it’s composition, sound actually travels slowest in gases, faster through liquids and faster still through solids. The fastest possible medium for sound transmission is a stiff material such as diamond through which sound can travel about 35 times faster than in air.

The temperature of the medium can also affect the speed of sound transmission as molecules at higher temperatures have more energy and thus vibrate more vigorously enabling the sound waves to travel faster.

Changes in air pressure as a result of changes in altitude will also affect the temperature of the air so this too can have a bearing on the speed of sound transmission – all of the figures quoted above represent the speed of sound at sea level. Therefore, if we are reliant on the air molecules to transmit sound waves, then it stands to reason that anything that has a direct effect on those molecules will also affect sound propagation.

Andy Coules is a sound engineer and audio educator who has toured the world with a diverse array of acts in a wide range of genres.
All Posts
PrevPreviousMargie Kirby Joins US Distributor Allied Professional Technologies
NextPerformance Lineup Announced For The 2018 NAMM ShowNext
Study Hall Top Stories
Explore All Study Hall