Up In The Air: Factors Contributing To How Sound Behaves In The Great Outdoors

Looking at various environmental factors which can affect sound propagation that simply don't exist in the controlled indoor environment.

Temperature gradients exist where areas of warm and cold air are adjacent to each other, causing the sound to travel in a certain direction as a result of the differences in the speed of sound.

A common example of this is often found during a normal summer day. In the morning, the air close to the ground is cold whereas the air above it starts to get warmed by the sun as it rises, resulting in a temperature gradient as shown in Figure 3a. This causes the sound to move quickly though the warm areas and slower as it hits the cold areas, which has the effect of pushing the sound downwards causing the levels of the propagated sound to fluctuate accordingly.

In the evening, as shown in Figure 3b, the opposite happens as the air closer to the ground is warm while the air higher up cools as the sun goes down, creating a gradient that has the effect of pushing the sound upwards, away from the audience. The greater the difference in temperature between the two areas, the greater the effect will be, and it can easily be exacerbated by increases in humidity. 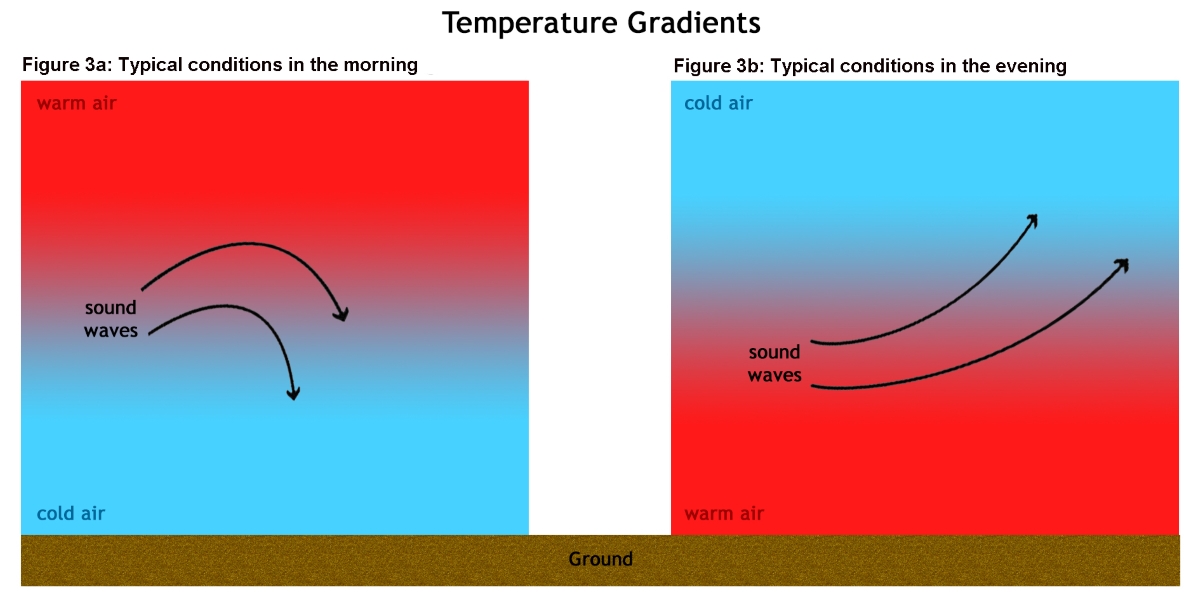 Humidity is the suspension of water vapor within the air, and being as we know that sound travels faster through a liquid than a gas, then it follows that as humidity increases, it will have an effect on the way sound propagates. What actually happens is it changes the way sound is naturally attenuated.

We know that sound loses energy the further it travels, as anyone who’s walked away from a sound system has easily observed. This happens because as the air conveys the acoustical energy of the sound wave, it absorbs a small amount of that energy (which is converted into heat). If it didn’t, the sound would just keep going on forever.

It’s also easily observed that this frictional effect is not even at all frequencies. Low-frequency sounds have longer wavelengths and require more energy to generate, so they’re not easily attenuated. Higher frequency sounds (typically those above 2 kHz), with their shorter wavelengths, are inherently weaker and thus more easily attenuated. This effect gets more pronounced as the frequency increases and explains why when someone drives past your house with a formidable car stereo all you can hear is the bass drum rattling the windows.

Humidity has an interesting effect on this natural phenomenon thanks to that water vapor suspended in the air. As the humidity increases the amount of water vapor increases which helps the sound waves to travel more easily which can dramatically reduce the natural attenuation of the higher frequencies resulting in them travelling much further than they normally would.

If we measure the frequency response of a broad band signal, such as pink noise, some distance from the loudspeaker when the humidity is low, we would get a frequency response similar to the one shown in Figure 4a – relatively flat and then rolling off around 2 kHz.

If we made the same measurement when the humidity is much higher, we would see a frequency response like Figure 4b, where the higher frequencies are attenuated much less. This effect can often be observed on hot humid summer evenings when sound appears to travel further and you can hear things at distance that you wouldn’t normally hear.

An excellent example of weather conditions combining to adversely affect the live sound reinforcement happened at the Glastonbury Festival in 2007 when The Killers were due to play on Saturday night.

It had been a warm day with rain in the morning and increasing humidity throughout the day. A large crowd gathered at the Pyramid Stage in anticipation of the headline set, and the heat from all those bodies combined with an evening chill to create exaggerated heat gradients above the bowl of the audience area.

When the band began playing, the sound from the PA was swiftly lifted over the audience by those heat gradients and was then carried swiftly to the site perimeter with very little natural attenuation due to the unusually high humidity. This caused the “noise police” to swiftly direct the front of house engineer to reduce the level (in order to comply with strict license regulations), which quickly resulted in an unsatisfactory level for the audience.

Some of them got rowdy, started shouting “turn it up!” and began to push at the front of the stage. In the immediate aftermath, an inadequate sound system was blamed for the poor sound but weather experts were soon brought in to explain the freak weather conditions that existed on the night.

So what can sound engineers do to minimize the impact of environmental factors? There’s no simple answer to that question as every situation is unique and environments differ drastically around the world.

However, there is one solution that will always help: Get your audience closer to the loudspeakers. The closer they are, the less physical volume of air there is between them for the environment to mess with.

Use delays and deploy them intelligently, and there shouldn’t be any significant problems – just remember that changes in the ambient temperature could affect your delay times.