What we commonly call “PA” is an amplification system used to reinforce a sound source and distribute it through a venue or building. PA stands for “public address” which hints at its most common usage – voice-based announcements in public spaces, be they train stations, sport stadia, shops, hospitals or airports.

While the principals of public address have existed since Vitruvius first explored architectural acoustics in 20 BC, I’m much more interested in the modern electric PA system and its application in the reinforcement of live music.

For the electric PA to come into being, the component parts first had to be invented and then combined to fulfill a need. The three basic building blocks of all PA systems are:

2) A way of increasing and controlling the electrical signal

3) A device to convert the electrical signal back into vibrations and propagate them.

Or in simple terms, we need a microphone, an amplifier and a loudspeaker. The first of these to be invented was the microphone, and like many such inventions there is some dispute over who did it first.

Most historians go with David Edward Hughes, who seems to have beaten Alexander Graham Bell, Emile Berliner and Thomas Edison by a few years to demonstrate his rudimentary carbon microphone in 1875. He never sought a patent for his invention, as he wanted it to be a gift to mankind, but he did coin the word “microphone” by thinking of it as the audio equivalent of the microscope.

The carbon microphone was a simple device that used carbon granules packed between two metal plates, the resistance of which changed proportionally in response to vibrations thus generating an electrical signal representative of those vibrations. While carbon microphones have now been superseded by more efficient designs, they were still being used in telephony up until the 1980s. And overall, the design is the prototype for modern mics. 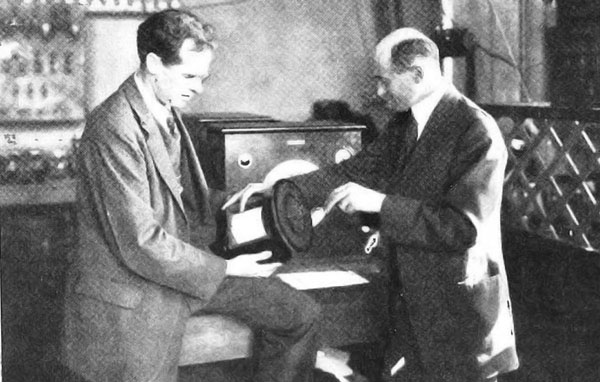 Kellogg and Rice as seen in a 1925 issue of Popular Radio magazine, holding the large driver of the first moving-coil cone loudspeaker.

Throughout the 1870s and 80s, various loudspeaker-like devices existed, most notably on Alexander Graham Bells’ telephone (1876) and Edison’s phonograph (1877), but the true moving coil loudspeaker, the forebear of all loudspeakers since, was invented by Oliver Lodge in 1898.

At the time he called it a “bellowing telephone” and there were limited applications for it (as the amplifier had yet to be invented). But it included the same basic design as all loudspeakers since – a diaphragm vibrated by a voice coil (“moving coil”) – the sound of which was then amplified by a flared horn.

In 1925, a research paper by Chester W. Rice and Edward W. Kellogg at General Electric was key in establishing the basic principle of the modern direct-radiator loudspeaker, with a small coil-driven mass-controlled diaphragm in a baffle with a broad mid-frequency range of uniform response. Edward Wente at Bell Labs had independently discovered this same principle and filed a patent that same year. These design principles are still used in direct radiators today.

Andy Coules is a sound engineer and audio educator who has toured the world with a diverse array of acts in a wide range of genres.
All Posts
PrevPreviousFrontline Audio & Vision Selects NEXO STM28 Modular Arrays For Expansion
NextYamaha NUAGE Creates Less Of A “Grind” For LA Audio Post FacilityNext
Study Hall Top Stories
Explore All Study Hall