In the post World War II years, competition was fierce to develop a more efficient method of amplification. Most of the research was conducted by the telephone companies in the hope of cracking the problem of signal loss over long distance telephone lines. Advances in semiconductor technology seemed to point the way, but it was a team of three at Bell Laboratories that made true progress.

John Bardeen, Walter Brattain and William Shockley took a strip of gold foil, sliced it in two with a razor blade, then attached it to a wedge of plastic with paperclips and pushed it up against a chunk of germanium. A small current applied to the germanium changed its conducting properties to allow a larger current to pass between the two pieces of gold foil, thus producing a power gain – and the transistor was born.

Eventually germanium was replaced with silicon, the design was refined, Nobel prizes were awarded and Shockley went on to found Silicon Valley. The great thing about transistors, from an audio point of view, is that they’re much smaller than valves and don’t generate as much heat as tubes, so smaller and more efficient amplifiers could be built.

Devil Music
Improvement and refinement of PA technology continued, with systems for motion pictures being a primary driver. Things really started to get interesting during the 1950s as the invention of the electric guitar and the growing popularity of rock ‘n’ roll increased the need for greater amplification. 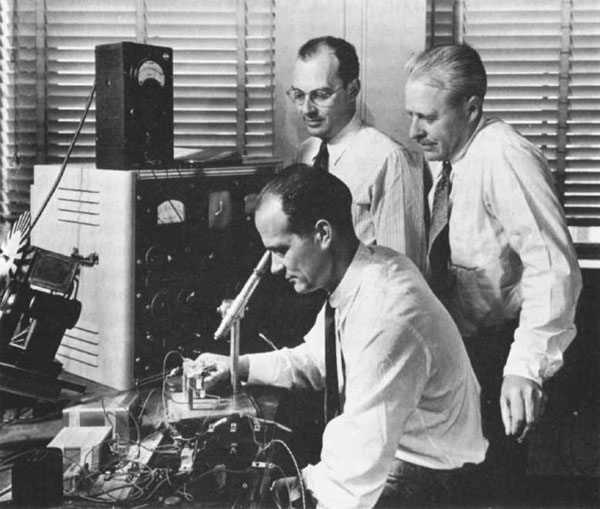 Bands were forced to push the limited PAs of the time into distortion to match the energy levels of their performance, resulting in a suitably raucous sound. This caused certain leading manufacturers to declare their warranties void if their systems were operated at full power and some even threatened to cut off retailers who sold their systems to bands who played “the music of the devil.”

Going into the 1960s, bands started carrying their own PA. Often on multi-act bills, the loudspeaker sets were stacked one in front of the next and then removed as its respective owners finished its set. The result was that each act sounded quite different – typically the sound improved as you got to the headline act because they could afford a more expensive PA.

A watershed moment came in August 1965 when the Beatles played Shea Stadium in New York. The exponentially growing popularity of the beat combo from Liverpool meant that they could play somewhere as large as a baseball stadium for the first time. On paper it made sense; however, the sound systems of the time simply weren’t up to the task. Extra amplifiers and loudspeakers were brought in, and despite the stage being in the middle of the field with the audience in the bleachers, the screaming of the crowd was so loud that they couldn’t hear the band – and the band couldn’t hear themselves.

It’s no coincidence that, just one year later, the band announced their retirement from live performance altogether and subsequently released “Sgt Pepper’s Lonely Hearts Club Band,” a concept album based around a fictional band that they believed could go out on tour on their behalf (albeit in recorded form). The Shea Stadium concert is widely considered a classic example of an industry that tried to run before it could walk.

You might say that the modern touring and sound industries were born the day after that concert. Things certainly started to pick up pace as bands demanded bigger and better systems, and we began to move inexorably into the golden age of the PA, the details of which will be covered next month in the second half of this article.

Based in the UK, Andy Coules (www.andycoules.co.uk) is a sound engineer and audio educator who has toured the world with a diverse array of acts in a wide range of genres.