Piecing It Together
The final piece of the PA puzzle came along in 1906 when Lee DeForest invented the Audion, the first device capable of amplifying an electrical signal.

He did this by taking a two electrode diode, used for detecting electromagnetic waves, and added a third electrode that enabled a small current applied to one of the electrodes to control a larger current across the other two – essentially adding the signal current to current from the power supply to make it larger (and thus louder).

The Audion was refined and became known as the triode, and eventually evolved into the vacuum tube or valve that helped usher in the era of radio, telephony, television and the early days of the electronic computer.

Once these three key inventions became freely available, various people started piecing them together and experimenting with early sound reproduction and amplification systems. Notable amongst these pioneers were Edwin Jensen and Peter Pridham who conducted a series of experiments in their laboratory throughout the 1910s in Napa, CA. 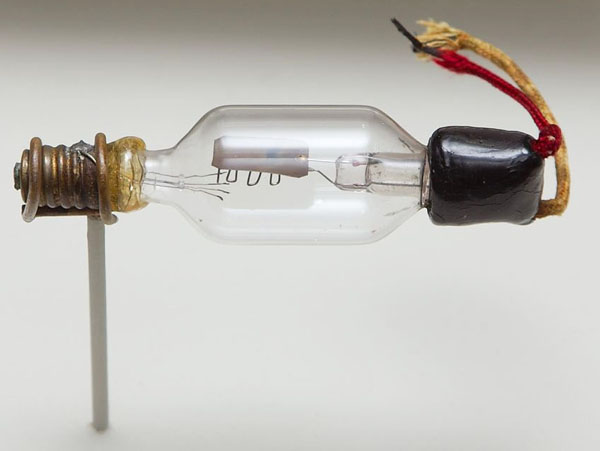 The earliest of these experiments involved connecting a microphone and loudspeaker to a 12-volt battery which resulted in the very first occurrence of acoustic feedback. It’s hard to imagine what they thought of this baffling and unexpected noise but it’s something live sound engineers have been battling against ever since. They continued their experiments by mounting the loudspeaker on the roof of their lab and claimed that a voice could be heard a mile away.

The first documented example of an electric PA system being used to amplify speech and music at a public event was on December 24, 1915 at San Francisco City Hall, when Jensen and Pridhams’ Magnavox system was publically demonstrated (Magnavox being Latin for “great voice”).

The event was a Christmas carol concert with an address by the mayor that was attended by 100,000 people. Despite the rudimentary system only being capable of generating about 10 watts of audio power, the use of large horn loudspeakers helped ensure that the crowd heard the Christmas music and speeches “with absolute distinctness,” according to reports. 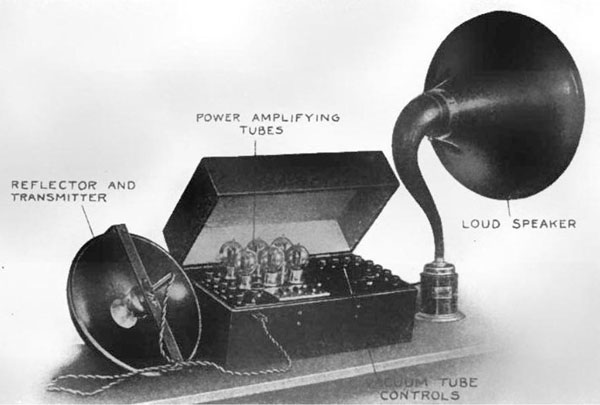 The Magnavox PA system used a carbon microphone (then called a transmitter) mounted on a parabolic metal reflector to focus and amplify the vibrations (much like the pinna of the ear does).

In the years that followed various companies got involved in the field of public address and loudspeaker design (i.e., Marconi, Tannoy, Western Electric, Bell Labs, Altec Lansing), and things gradually developed hand in hand with the emerging fields of radio, telephony and cinema. Horn loudspeakers became common sights at large public events on both sides of the Atlantic.

The first sitting U.S. president to use a PA (the Magnavox system) was Woodrow Wilson in 1919, who addressed a crowd of 75,000 people in San Diego as part of his tour to promote the establishment of the League of Nations. In 1925, King George V used a Marconi PA equipped with just six horn loudspeakers to address a crowd of 90,000 people during the British Empire Exhibition at Wembley. 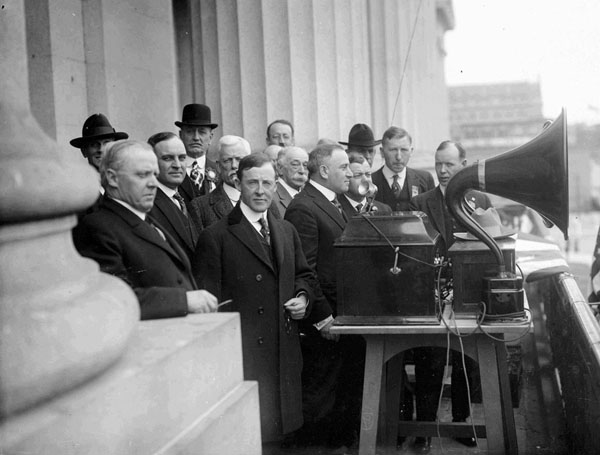 Jensen and Pridhams’ Magnavox system in use circa 1919.

Overcoming Limitations
But the use of PA systems in live musical performances was often limited to simply amplifying the voice so it could be heard above the band. This limitation may have been in part due to the relatively small valve (tube) amplifiers of that era.

To work properly, valves consume large amounts of power and generate a lot of heat so if you put a lot of them together, in order to get greater amplification, the power demands soon become excessive and there’s a risk of the amplifier overheating. Therefore, valve amplifiers of this period were typically limited to around 20 watts of output power.