The Drop, The Smack: Mondo Low End For The Ultra Music Festival

Since its founding in 1999, the annual Ultra Music Festival in Miami has become one of the largest festivals of its kind in North America – a showcase of Electronic Dance Music (EDM) spread over three days and 14 stages and, this year, boasting a record-breaking crowd of 165,000-plus.

It reflects numerous reports that the EDM genre is a rapidly growing segment of the North American concert industry that in turn could present a valuable revenue source for professional audio providers.

The 2012 iteration of Ultra, staged in late March, presented an assortment of some of the top DJs and live acts from across the spectrum of EDM, including Tiësto, Kraftwerk, Avicii, Justice, David Guetta, Armin Van Buuren, and many others.

Held annually in March, Ultra has inhabited various locations in Miami, but in 2012 returned to its former home at downtown Miami’s Bayfront Park.

Although the venue has changed from time to time, one element that remains constant, says Doug Fowler, principle of St. Louis-based Fowler Audio Service and system engineer/tuner for Ultra, is the influence of Terry McNeil.

As the owner of TMC Audio Systems and co-owner of Nightclub and DJ Gear in Miami, McNeil is Ultra’s long-time audio designer and assistant production manager, very much the architect of the festival’s distinct sound.

“Terry knows exactly what he wants to hear out of these EDM systems and he and I work together with the vendors to produce that result,” Fowler says. With dramatically different systems deployed, however, that’s easier said than done. Typically, too, the time Fowler and McNeil have to tune the systems at Ultra is in short supply.

“We had an extra day this year, and yet I had less time than ever,” Fowler notes. “This year, on the Carl Cox stage, for example, by the time I got some silence I only had 20 minutes.”

McNeil has earned the nickname Dr. Bassenstein, explaining, “I’m always about the bass, and I’m always putting together Ultra with different systems and products, but still making the stages sound the same. Like Dr. Frankenstein, you use a lot of different parts to put together the monster.”

Both Fowler and McNeil describe their work as an ongoing experiment and Ultra as the lab they come together to work in, particularly to formulate the low-end reinforcement EDM audiences insist on.

“The central challenge for any stage is integrating the subs so the important frequency regions of dance music operate efficiently,” Fowler says. “There’s a lot of content below 50 Hz, and something we’ve learned over the last several years is how to mix and match subs to get them to play together without having alignment issues in critical frequency bands.”

Further, he notes, the festival’s sonic requirements are a different animal than a typical pop/rock show: “You can’t roll up to Ultra with the kind of rig you’d use for a rock gig and expect to be successful. The bass has to sound effortless. 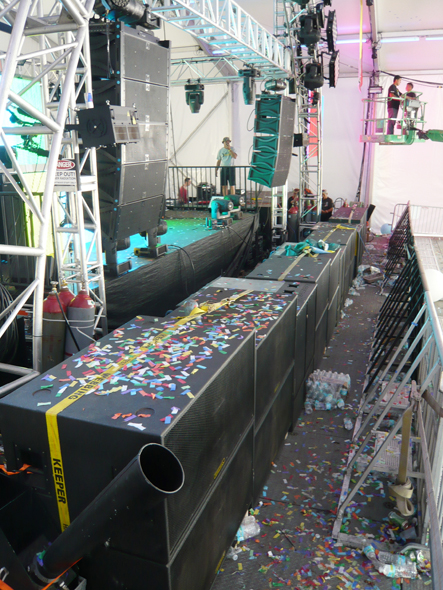 The configuration at the Mid Park Stage, with a long line of BASSMAXX subs running along the front of the stage. (click to enlarge)

“There are actually three different low-end areas in EDM: the drop, which is roughly 30 Hz to 50 Hz; the area between the drop and the smack, which is between 50 Hz and 55 Hz; and then the smack, which is basically 100 Hz to 140 Hz. Understanding that these three areas of bass response are critical to EDM is crucial to understanding how to set up these systems correctly.”

One of the primary challenges this year was the Mid Park Stage, Fowler continues, which features DJ performances exclusively and a different genre of EDM each day. “One side of the Mid Park Stage was built on a little bit of a hill slope, so one side of the tent was lower than the other, relatively, so what happened was there was no trim height on the inside.”