Church Sound: Do You REALLY Know Your Channel EQ Controls?

Master the mixer and improve your mixing

You could potentially improve your mix quality by taking one little step: learning how the channel EQ controls affect sound frequencies.

I recall seeing the EQ knobs labeled “High” and “Low” as I looked upon the sound board during my first time mixing. “I know what those mean,” I thought. “I can increase or decrease those high and low frequencies.” I was only partially right.

The high and low knobs do allow me to boost/cut those appropriate frequencies, but it begs the questions;

—What are the actual frequencies being affected?

—How are they being affected?

—Are they all being treated equally?

—What about the mid-range is so important that it gets its own “Sweep” knob?

—And if your channels have a Q option….what in the world is Q?

Before digging into these questions, let’s first cover the two types of channel EQ controls.

1) The primary frequency point in which changes will occur. This is called the frequency or center frequency. A sweep-able control allows you to change this point.

2) The type and amount of change. For example, a boost or a cut and the degree to which you do that, such as a 3 dB cut or a “-3 dB” change. This is known as the amplitude or gain.

Using a parametric equalizer, you would alter a sound by:

—Picking the center frequency with which you want to focus your tonal changes.

—Altering the amplitude by applying a cut or boost to that specified frequency range.

When it comes to digital EQ controls wherein you are using a computer screen to visualize the EQ curves and make changes, you are using a parametric EQ that also can allow for using multiple frequency center points so you aren’t limited in the number of points you can control.

So far, the terms frequency center point, amplitude/gain, and bandwidth (Q) have been discussed. What hasn’t been discussed is the forms of EQ in which these can be controlled.

There are two forms of EQ control:

1) Peaking EQ—A peaking EQ is exactly as it sounds. You select the frequency center point which is set up on the top of a bell curve. If you have a Q control, you can adjust the width of that bell curve. Your mid-range controls are peaking EQs. You might even have an EQ control labeled “High-Mid” which would qualify as a mid-range peaking EQ.  In this image, the blue line indicates a wide boost while the red line indicates a narrow cut. 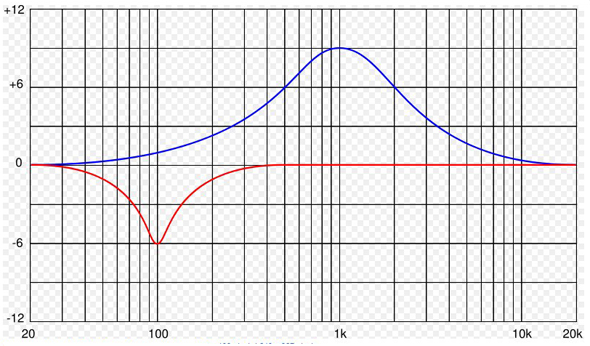 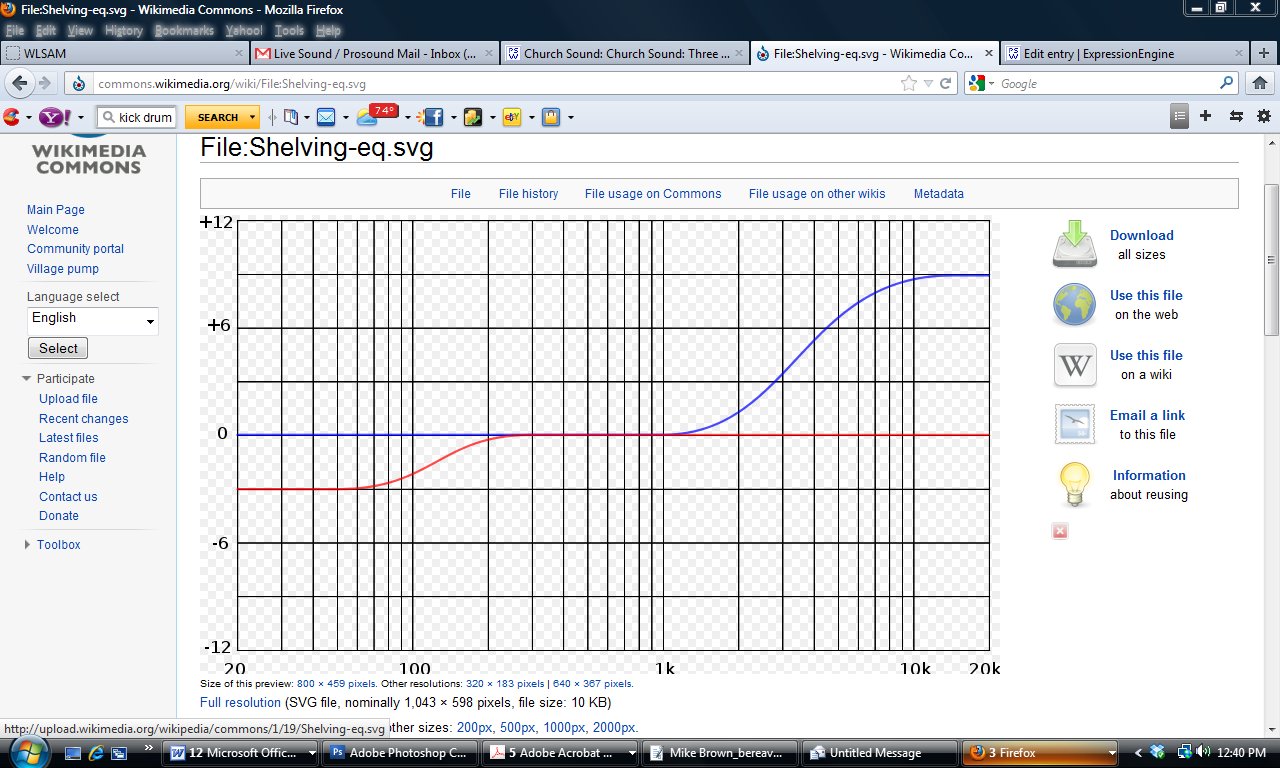 There is one critical bit of information we haven’t discussed and it’s the one I overlooked when I first started mixing; the baseline values.

The high and low shelving EQ’s have a set frequency point. Your mid-range peaking EQs have a baseline frequency. Do you know what they are? I hate to tell you, but you need to crack open your manual. For example, in my mixer, the frequency point of the High EQ knob is 10 kHz and the Low EQ knob is 100 Hz.

Knowing the baseline frequencies, especially with the shelving EQs, you can identify the exact frequency point in which you will base your cuts and boosts.

Going To The Next Level

Let’s look at what you can discover given all this information. I’ve got a mixer with a fixed channel high pass filter of 80 Hz. Engaging this, all frequencies below 80 Hz are completely cut out.

Considering my Low EQ frequency point is 100 Hz, then when I boost or cut my lows with the HPF engaged, I’m affecting a very small range of frequencies. If I really wanted to get some thump out of my kick drum, I wouldn’t want that HPF engaged. But what if I could use that HPF to get a sound from my kick drum that fit the song?

The channel EQ buttons give you a lot of control over how you modify a sound. Knowing exactly how they control them and knowing their frequency characteristics, you might see them in a new light with new possibilities. And knowing those baseline frequencies…just one more way you can master your mixer and improve your mixes.

Ready to learn and laugh? Chris Huff writes about the world of church audio at Behind The Mixer. He covers everything from audio fundamentals to dealing with musicians. He can even tell you the signs the sound guy is having a mental breakdown.

Chris Huff is a long-time practitioner of church sound and writes at Behind The Mixer, covering topics ranging from audio fundamentals to dealing with musicians – and everything in between.
All Posts
PrevPreviousThe Drop, The Smack: Mondo Low End For The Ultra Music Festival
NextChurch Sound: Understanding Noise And Isolation In A SanctuaryNext
Top Stories
Explore All Study Hall