From the late, great Recording Engineer/Producer (RE/P) magazine, the pitfalls and rewards, musical and otherwise, of recording in the world's largest echo chamber.

On the nights of February 16 and 17, 1971, the first commercial quad recording sessions ever were held In San Francisco’s Grace Cathedral.

This monumental edifice to God ‘s glory and Episcopalian financial acumen is blessed with a fine pipe organ, a 90-foot ceiling, and a 7-second reverberation time. The latter, in particular, put some stringent limitations on both the recording technique and musical style involved.

The session was for side 2 of Paul Beaver and Bernard Krause’s new Warner Bros. album, Gandharva. Gandharva is a Sanskrit word, which, roughly translated, means “the celestial musicians.” Since these are not available through the A.F. of M. (contractual limitations being what they are), we imported the nearest counterfeits from Los Angeles: Gerry Mulligan, Ga il Laughton, Howard Roberts, and Bud Shank – old timers and all consummate professionals.

The music ranged from pure jazz to shades of Webern to more than a hint of Charles Ives. In most cases, the harmonic movement was very slow to avoid muddiness caused by reverberation.

The music was recorded on a 3M 16-track machine, through six Dolby A-301 units. We recorded a maximum of 12 tracks, leaving 3 open for possible overdubs, and using one for 60 Hz for a film sync track, as the session was being simultaneously filmed in 16 mm color. A wild assortment of small mixers were used to handle the mikes, including a custom B-track Spectra-Sonics and assorted homebrew jobs.

Monitoring was through four Rectilinear Ill’s, driven by a pair of Harman-Kardon Citation 11 power amps. The speakers were located on the corners of a 9’ x 9’ square; it was necessary to get them as close as possible to the mixer to overcome the wretchedly “echoey” acoustics of the vestry that we had commandeered as our control room . The monitor system was fed by a custom 12 in to 4 out high level mixer which served to pan each of the mikes into roughly the same place in which they we re scheduled to go in the final mix.

The basic intent of the recording was to use the space in the cathedral itself in a dramatic and musically effective way. The musicians would often stroll around the building, interacting with the acoustics as well as each other. This provided a special sort of problem for the recording engineer, because the highly reverberant acoustics of the cathedral necessitated fairly close miking in order to obtain satisfactory presence. 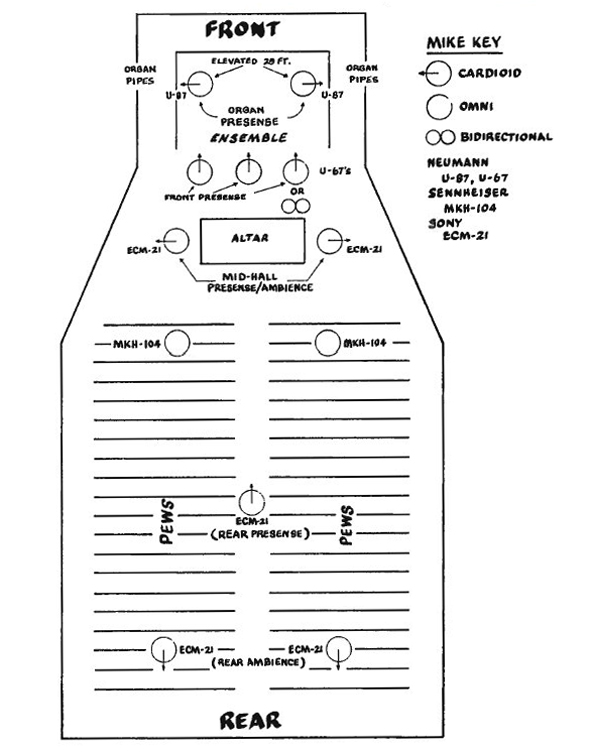 This gave a somewhat exaggerated, but highly dramatic sense of space, with the entire Cathedral being compressed inside the quad listening field. This was not a classical recording, striving for maximum accuracy, but rather a pop recording exploring the possibilities of the space in a creative manner.

Condenser mikes were used throughout. This may have been a mistake, since we had substantial problems with noise from the ambience microphones due to the very low SPLs involved (imagine recording a flute with a microphone 100’ away from the instrument!). I suspect that the use of high-output dynamics for the ambience mikes would have helped the noise problem somewhat.

In any event, we managed to keep the noise below the level of a typical stereo lP or reel-to-reel tape, let alone cassette! The spectral content of the noise was closer to “1/f” (3 dB/oct low-pass) than gaussian, and this helped reduce its obviousness.

The music could be divided into two basic types. The first involved musicians walking around while they were playing, usually with the pipe organ accompanying. The second involved ensemble playing with the musicians staying in fixed positions near the pipe organ in the front of the church.

The first situation was taken care of with the mikes distributed throughout the hall, plus two presence mikes for the organ: one U-87 for each side of the pipe ranks.

The second, surprisingly, caused more problems than the first. The ensemble consisted of guitar (acoustic or electric), flute or alto sax, baritone sax, and two harps, played by one harpist. At first, we tried a classic left/center/right stereo pickup for the ensemble.

However, this failed due to gross imbalances in the various instruments’ acoustic levels. It was finally decided that it was necessary to close-miking each instrument, although this ran counter to our stated goal of using the acoustics of the cathedral to the greatest possible extent. After extensive experimentation, we finally got sufficient separation to permit a musically balanced mix. Even so, the harp was very marginal, and required extensive equalization in the mix in order to bring it out sufficiently. 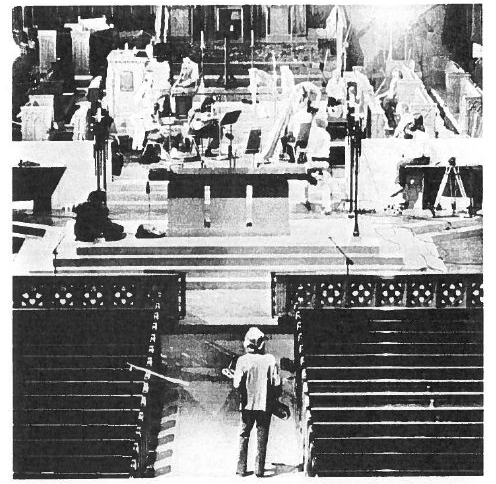 Unfortunately, it was impossible to baffle the harp be cause of the time limitations and communications problems between the musicians. Final harp pickup was a Neumann U-67, bidirectional with one harp on each side. The mike was placed maximally close to the sounding board.

In the mix, we used the Orban/Parasound stereo matrix on the close miked tracks only in order to regain some of the space which we had lost by essentially mono-miking each of the instruments. In one of the cuts (“Short Film for David”), it was necessary to overdub the harp later in the studio, since it simply couldn’t compete with two saxes, electric guitar, and Moog.

In the overdubbed material, use of the Stereo Matrix was particularly important, since these tracks had no cathedral reverberation connected with them, and as mono-miked tracks, they would have come out as incongruous point sources in the live quad sound field.

The musicians were very pleased with the product as it was played in the vestry control room.

The last piece in particular l”Bright Shadows”) had a magical quality, with the pipe organ permeating the quad space, the harp in front, and baritone sax and flute moving all around the space, calling and answering atiphonally. This piece, in particular, works much better in quad than in stereo-in stereo, everything flattens out, and becomes two-dimensional and non-involving when compared to the quad effect of being in the middle of the space.

The stereo mix for all the music recorded at this session was derived from the quad mix by mixing left front and left rear to get the left stereo channel, and by mixing right front and right rear to get the right channel. This procedure required changing the front-to-rear balance for each cut, which is in itself a comment on the essential futility of coming up with a completely satisfactory quad/stereo compatible disc. In any event, the quad effect was so for superior to the stereo that Beaver and Krause are determined to do all of their future recording quadraphonically.

The mix itself was quite easy. The tracks were panned in the quad space the same way they had been when they were originally monitored. We monitored with JBL 4320’s in a square about 5’ off the control room floor. The board was a modified Quad-Eiqht 16-track at the Village Recorder in Los Angeles. We used very little equalization-at the most ± 2 dB at 10 kHz or 100 Hz, except for the close-miked instruments, which were equalized more radically. 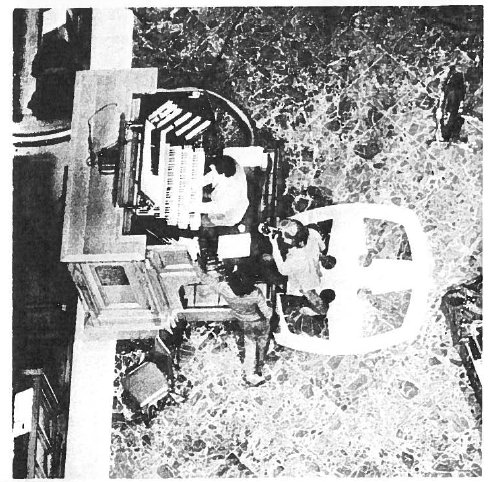 This illustrates the desirability of recording in a hall with good natural acoustics with mikes a reasonable distance from the instruments if a natural, realistic sound (as opposed to super-presence larger-than-life multitrack sound) is desired. No compression or limiting was employed, and Dolby A-361 units were used throughout. My personal feeling is that pop music recording can benefit greatly from the use of Dolby, as their use creates more freedom to post-equalize, as well as to create musically effective dynamics in the mix.

And if American pressing plants could maintain the quality standards routinely maintained by such European firms as Deutsche Grammophon and Phillips, we could even get these dynamics unmarred to the home listener. (This is a somewhat bitter and extremely unsubtle plea to the people responsible for quality control of American discs.)

It is interesting to mention in passing that the other side of the disc was recorded using the usual 16-track studio mono-miking techniques. We used a pair of Parasound stereo matrices for front and back to generate the quad space. The spatial sense was quite impressive, and the ability to place musical material front , back, and at both sides greatly aided in separating complex musical textures,

Nevertheless, the artificial space was not as real or as effective as the natural sound of Grace Cathedral, and it was the unanimous conclusion of everyone involved in the remote that the money and effort had been well spent.

Editor’s Note: This article is from Recording Engineer/Producer (RE/P) magazine, which began publishing in 1970 under the direction of publisher/editor Martin Gallay. After a great run, RE/P ceased publishing in the early 1990s, yet its content is still much revered in the professional audio community. RE/P also published the first issues of Live Sound International magazine as a quarterly supplement, beginning in the late 1980s, and LSI has grown to a monthly publication that continues to thrive to this day.

Our sincere thanks to Mark Gander of JBL Professional for his considerable support on this archive project.