A Revelation
However, due to the use of high-impedance microphones, signal loss was a major issue so cable runs were kept to a minimum, which meant the mixer was typically located close to the rest of the system. Fortunately in New York at the Fillmore East, Bill Hanley developed the first multi-core “snake” that enabled the mix position to be moved away from the sound system.

This is something we take for granted now but at the time it was a revelation, as Dinky Dawson (Fleetwood Mac’s engineer) noted: “Up to that moment I had never seen any group mixed from anywhere other than the side of the stage. This was revolutionary!”

Hanley and technical engineer John Chester came up with the idea that placing transformers at the ends of a cable run would facilitate the ability to send high-impedance microphone signals down a balanced line over greater distances without picking up any interference or losing level.

At the time this approach was too large to take on tour, but the development of low-impedance mics that had a built-in balancing transformer, such as the Shure Unidyne III (1965), SM57 (1965) and SM58 (1966), allowed multi-core snakes to become portable. 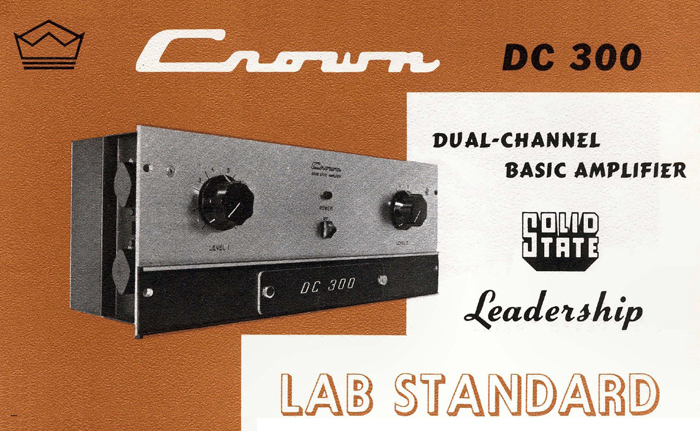 A portion of the Crown DC300 spec sheet.

Shortly thereafter, Dawson became one of the first touring engineers to set up shop in the new “front of house” (FOH) position, located centrally amidst the audience.

Then in 1967, Crown released the solid state (transistor) DC300 amplifier, so named because it utilized a Direct Coupled (DC) design that was capable of delivering 300 watts of power. What was key to the success of the DC300, above and beyond power, clarity and low distortion, was it’s size at 7 inches tall and weight of 45 pounds, less than a quarter the size and weight of an equivalently powered tube amplifier.

Making A Way
At this point most concert loudspeaker systems were quite simple, comprised of either multiple instances of the same model of loudspeaker (often arranged in a column) or combinations of cone loudspeakers and horns (to handle the low and high frequencies, respectively). Being as any given loudspeaker has difficulty delivering a range of more than three to four octaves with clarity and low distortion, these systems could not be considered high fidelity. 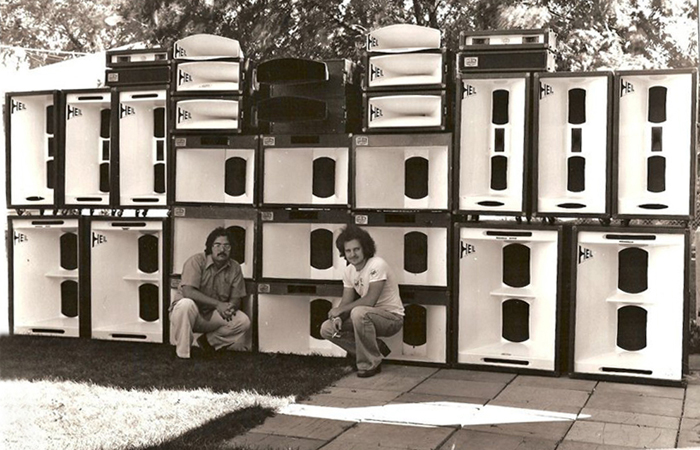 A Heil Sound traveling system circa 1973.

What was needed was a way of splitting up the signal into multiple frequency bands that could be more efficiently handled by individual amplifiers, and then recombined in a manner that was pleasing to the ear. And the emerging PA companies were falling over themselves to accomplish just this.

In 1969, Watkins unleashed the Festival Sound System, one of the first 4-way sound systems, splitting signal into bass, lower-mid, upper-mid and high-frequency portions. A short while later (early 1970), Bob Heil was called into service to build a monstrous 4-way system for the Grateful Dead at the Fox Theatre in St. Louis. He estimated that the total audio power of this system was around 20,000 watts (despite being powered by home hi-fi amplifiers!).