Basic Template
Loudspeaker capability developed and grew throughout the 1970s, with the 3- and 4-way ground stacked system dominating and then gradually taking to the air over the next 25 years or so. While hanging or suspended systems were developed, the basic template remained the same.

These systems are often referred to as “point source,” meaning they propagate sound equally in all directions, but that can be misleading. In reality, they only behave like a point source at lower frequencies and gradually become more directional as the frequency goes higher.

As a result, they tend to “spray” a lot of bass and lower mid range energy in all directions – against the ceiling, floor and side walls – causing delayed reflections that can muddy the sound and make it difficult to manage.

Point sources also conform closely to the inverse square law, meaning that the sound level drops by three quarters for each doubling of the distance from the source due to the fact that the expanding sphere of sound energy is spread over an increasingly larger area. This is another easily observable property as we all know that the sound is typically louder at the front, near the loudspeakers, and quieter at the back.

During this period, numerous manufacturers entered the concert market, presenting increasingly sophisticated loudspeaker systems. JBL Professional, Meyer Sound, Martin Audio, EAW and Turbosound are just some of the names, with the growing number of local and regional sound companies now having the opportunity to purchase “off the shelf” packages instead of designing and building their own loudspeakers. 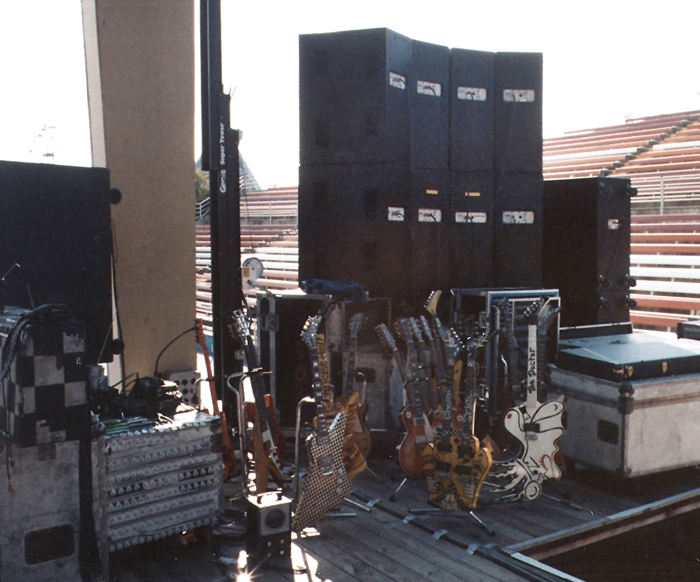 EAW in particular enjoyed huge success with the KF850, a 3-way “arrayable” loudspeaker designed by Kenton Forsythe – for several years it was tough to find an equipment rider that didn’t include the KF850. Meyer Sound lead the way in developing self-powered live systems, with amplification and electronics matched to the specific loudspeaker parameters and physically housed in the same enclosure.

Line ‘Em Up
Then in 1993, Christian Heil and his team at a company based in France named L-Acoustics launched the “modern” line array era with the introduction of the V-DOSC system. I say modern because the principals behind the line array have been known and used (in a limited sense) for quite some time.

Harry Olson first published his findings on the subject in 1957, and the benefits of column loudspeakers (where vertically aligned drivers in a single enclosure produce mid-range output in a wide horizontal and narrow vertical pattern) had been utilized in the Shure Vocal Master PA and Marshall columns that were available in the 1960s and beyond. 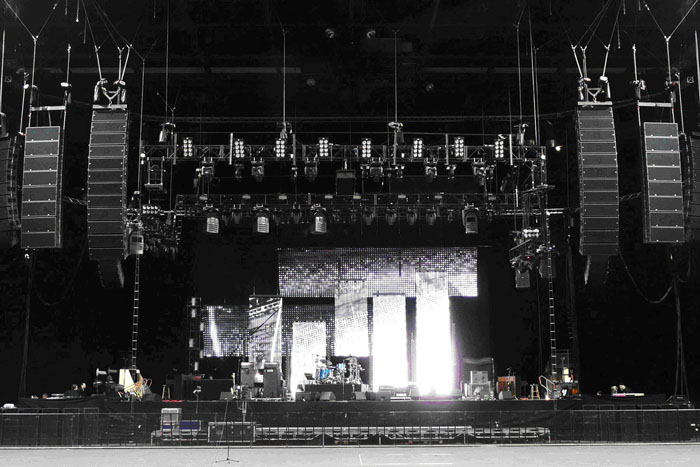 L-Acoustics refined the science and exploited the constructive interference caused by closely aligned loudspeakers to push sound energy further, and with a more even frequency response. The company’s “cylindrical wave generator” also focused output more in the horizontal plane and wasted less energy in the vertical plane, resulting in a more even distribution of sound throughout the space.

Line arrays are very much a product of the computer age, with precise modeling and precision deployment key to getting the required result. However, it’s important to note that line arrays are not the ultimate sound system; there are still many situations where a traditional flown or ground stacked approach is better suited.

The driving force behind every pioneer highlighted in this fascinating journey has always been the desire to provide a pleasing experience for the audience. As the technology advances, we as audio professionals are more able to place the sound precisely where it’s needed to provide the visceral experience that only a live performance can provide.

But it’s important to remember that the PA is merely the conduit for the performance. If you were able to directly compare the concert experience of someone in 1964 with someone in 2014, chances are they would express the same degree of joy and excitement at what they had witnessed, despite the obvious gulf in fidelity. Because at the end of the day, it’s all about the music.

Based in the UK, Andy Coules (www.andycoules.co.uk) is a sound engineer and audio educator who has toured the world with a diverse array of acts in a wide range of genres.