Clair Brothers developed its first 4-way system by splitting the sound up into bass, mid, high and super-high bands, and in 1971 McCune Sound Service (San Francisco) employees John Meyer and Bob Cavin created a loudspeaker known as the JM-3 (named after John Meyer). This was a 3-way system that also enclosed the amplifiers and all of the integrated electronics in an external equipment rack.

Thus at the dawn of the 1970s, we entered the golden age of the ground-stacked PA system – so called because the bass loudspeakers were placed on the ground or stage, with the mid and high loudspeakers stacked on top.

Many of the those early big PAs were based on aging loudspeaker models such as the Altec “Voice of the Theatre” Series (from the small A8 through to popular A4 and the large A1), which were designed more for use in cinemas and theatres.

Gradually PA companies such as Clair and Heil Sound shifted toward use of transducers (cone and compression drivers) developed by JBL Professional, a company with a rich heritage extending back to its origin in 1945. Notable developments include the D130 15-inch cone (introduced in 1947), which was the first commercial use of a 4-inch voice coil (a variant of which remained in production for the next 55 years), and the model 375 (introduced in 1954), the first commercially available compression driver with a 4-inch diaphragm. 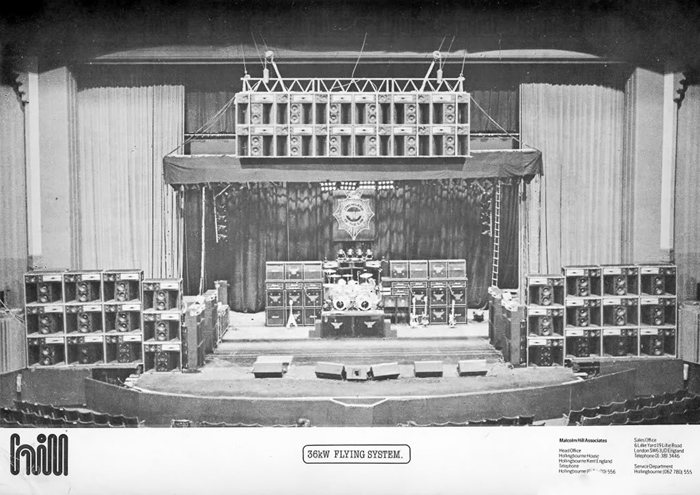 The “36kW Flying System” from Malcolm Hill Associates of the U.K.

Mix & Monitors
Live mixing consoles as we know them today came with a big assist from the recording side of audio. Bob Heil adapted a Langevin studio console for his fledgling large-scale PA in 1970, and he was also an early user of the Mavis console from IES in the U.K. as well as working closely with the Sunn engineering department on the first 8-channel Coliseum mixer (which was hand built).

A few years later, Ron Borthwick and Bruce Jackson, working with Clair Brothers, developed an unusual mixing console, the CBA 32, that went on to become the company’s mainstay into the 1980s. It was the first console to offer plasma bargraph meters, which displayed both average and peak sound levels, and the meters were conveniently located beside the faders. In addition, it was the first live console to incorporate parametric EQ.

Another key step was the development of more complex stage monitoring systems. Prior to this point musicians had either relied on carefully balancing their levels so they could hear everything they needed or they placed loudspeaker stacks at the side of stage which “folded back” the main mix (as those early mixers didn’t have auxiliary outputs capable of providing monitor mixes).

But the increase in the size of the PA systems meant monitors were becoming more of a necessity for the performers to not just hear and feel the performance, but also to be able to sing in tune. Pretty soon, curious wedge-shaped loudspeakers started appearing on stages, and once musicians heard them, they all wanted one (or more).

It’s interesting to note that such additions were not always welcomed by front of house engineers. For example, Pink Floyd engineer Mick Kluczynski observed that wedge monitors spread “like a virus” and he quickly found himself battling a secondary sound system, struggling for control of the main mix.