I’m attracted to oddball vintage microphones – my mic collection reflects this – and one of the more curious looking pieces is the Primo UD-863.

The company was founded in Tokyo, Japan in 1952 as the Musashino Acoustic Laboratory, first producing record stylus cartridges and crystal mics. The name soon changed to Primo Company Ltd., and the focus became dynamic and electret condenser mics.

Today, Primo is still in business, a maker of mics and parts for several business segments, including acoustic measuring, security, broadcast, teleconferencing, noise cancellation, medical applications, and others. The headquarters and main manufacturing facilities remain in Tokyo, and there are six other Primo offices throughout the world, three of which are also manufacturing sites.

The earliest catalog I’ve seen from Primo dates to 1980, showing a variety of models for live, install, and recording, some with neat features. The UD-950 vocal mic, for example, sported a built-in LF attenuator that rolled off response by 10 dB at 100 Hz. The catalog states, “This eliminates unwanted bass for certain applications such as extremely close talk conditions.” (In other words, proximity effect.)

Another listing in the same catalog touted the quick impedance changing abilities of the UD-871B. The change was accomplished by simply reversing the connector 180 degrees.

Manufactured in the 1960s, my UD-863 is cardioid dynamic design with a non-metallic diaphragm, but other than that, I don’t know a lot about it. It was purchased at an estate sale and included a few specs on a tag. (I’ve yet to unearth a data sheet.)

The mic looks like it’s shock mounted but it’s more like “quasi-shock mounted.” The body is held in a ring by three screws and plastic spacers. Any thumps or noise induced into the base support structure are still transmitted mechanically to the body. (I suspect the mounting ring was designed primarily to look cool rather than provide better isolation.) On the upside, the ring swivels to allow the mic to be positioned as needed. 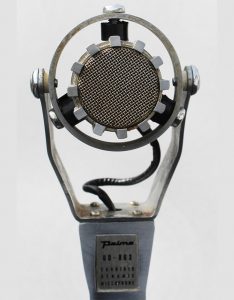 The base unit includes two switches – on/off and selectable impedance with a choice of 600 ohms and 50 Kohms. Meanwhile, the rear of the body offers a large knob marked “Bass Roll-Off,” with settings of 0, -5 and -10 (no reference frequency given). Since my unit doesn’t work, I can’t measure what frequencies are rolled off.

The business end of the mic has a fine mesh grill flanked by machined ribs that provide good protection for the element, while the bottom of the base houses a 3-pin screw-on connector and a built-in stand mount with 5/8 27 threads for use with mic stands common in the U.S.

A cable links the body to the base. There are no visible strain reliefs for the cable but it’s of an ample length, enough so there’s no strain regardless of positioning. The base, ring and most of the mic are made from aluminum and have a milled finish, while the arms that support the ring are made from steel. The rear end of the body is finished in brown enamel capped with a chrome-plated face with the roll-off indicator.

It’s certainly a unique, distinctive-looking mic, so much so that out of the hundreds in my collection, it gets displayed regularly. As for how it sounds, I can’t tell, but given the company’s reputation for making quality mics, I’d suspect it’s at least acceptable.

Craig has worked in a wide range of roles in professional audio for more than 30 years in a dynamic career that encompasses touring, theater, live televised broadcast events and even concerts at the White House. Currently he owns and operates Tech Works, a regional production company that focuses on corporate events based in Reno.
All Posts
PrevPreviousPreSonus Releases New Studio One 5.0 For macOS & Windows
NextLost In Translation? Pro Audio Has A Language All Its OwnNext
Top Stories
Explore All Study Hall