Living With Sound: What I Learned From A (Very) Inexpensive Tool

Gaining an invaluable education about sound, along with a new perspective, via a five-dollar app....

I have a curmudgeonly hate for modern technology. I like roll-up windows and faucet handles and telling stupid electronics what to do, when, and at what volume. I avoid the automated doors at stores in favor of the pull-handle ones. I think there’s something to human beings, to humans BEING, that technology at its zenith can’t beat. In the world of life, this makes me a dinosaur. In the world of audio, it makes me an amoeba.

But, I’m also a freak about preparedness and variable control, which means if I have a tool to make things go my way, I’m going to give it a whirl. So, I decided, having recently purchased my first smartphone, it was time to try out a spectrum analyzer app. I chose Speedy Spectrum Analyzer. It was well-reviewed, seemed relatively simple, and for the five-dollar price tag, I was willing to take my chances.

After a few days of poking and prodding, I realized many of the app’s features needed something additional to work that I didn’t have – bluntly, more knowledge about acoustics and the workings of RTAs. I felt defeated for a hot minute but then remembered a conversation I’d had with a visiting engineer.

We’d been talking about learning the guitar and he said to me, “You know, when I was learning to play, I’d just carry the guitar around the house with me. Not to play it, just to, you know…live with it.”

I decided to live with the app for a while. I took it to work and let it run during sound check to listen with me. When I thought I heard a problem, I looked to its precision to help me find it quicker. Not only did it help me find the trouble spots faster, it was a good quiz for my ears. I would guess what I was hearing and then check my accuracy with the app.

As terrific as it’s been to have a form of frequency training that I can do in the real world as opposed to the sine wave world, it’s been even more interesting just watching it run during shows. I know just enough about harmonics to know that I need to know more.

Watching the waveforms, particularly during solos, has given me a much greater respect for and understanding of all the frequencies that are working to create what I hear and perceive. It really made me think about tone-shaping (and OVER-shaping) and just the overall range of different instruments and voices. It has given me a good point of reference for where most of the action is happening with a sound source AND what those ranges sound like in the real world.

I got hooked. I started turning it on at home – just to live with it. I found out there’s a constant 52 Hz hum everywhere in my house. My big mixing bowl rings at 749 Hz when I thump it with my finger. My silverware drawer is a cacophony of sounds above 12k. I found that I wanted to know at what frequencies my doorbell rings and my dogs bark. My house, which I am intimately familiar with, became new and exciting undiscovered territory.

I started taking it to another job. I learned the constant squeal backstage that annoys one of my carpenter hand friends comes from the TV screen at the stage manager’s panel, and it’s at 15.2k. The computers in the lighting/video booth in the big theatre? Rocking out hard at 22k. The balcony in the little theatre has a big-time spike at 17.6k, the origins of which are undetermined – and on the sides of the balcony, it goes away.

Knocking my knuckles on the table at the audio console produces a fascinating concoction of spikes and valleys. And when I sing notes into it, I see that the general character of my voice stays the same, and within the basic “shape” of it, the peaks and troughs move and change like careful choreography.

I’m fascinated by sound. I’ve always liked and been interested by this job, but being able to see my medium in this new way has given me a scientific enthusiasm for it that I didn’t and couldn’t have had before. It’s like looking into a microscope. The more you dig, the more you discover.

In my daily work, I’m used to thinking about sound in theoretical terms and thinking about my physical job as being made up by cables and gear and the like. But in reality, I’m working with this never-ending tide of energy that’s totally alive, breathing and changing and affecting me as much as I’m affecting it. I have a long way to go in understanding exactly how all of it works into what I do. But not only am I more excited to learn, I have a greater grasp on why I need to know. Not a bad education for six bucks.

Who knows – maybe technology and I will find a way to coexist yet. 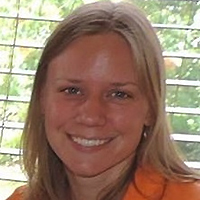 Kerrie Mondy is a front of house engineer at several St. Louis venues, including the New Line Theater and Ferring Jazz Bistro. She started her career in radio as well as working as a stagehand and running sound at her local church, and she's also a member of SoundGirls.
All Posts
PrevPreviousFoundational Thinking: Building A Solid Worship Mix From The Ground Up With Drums & Bass
NextAudinate Announces New Dante AVIO Bluetooth & USB-C AdaptersNext
Study Hall Top Stories
Explore All Study Hall