“I did a quick count and realized that Le Mobile has recorded forty-one of them."

When Guy Charbonneau first read Rolling Stone’s list of the 100 Greatest Singers of All Time, it almost looked like a My Space Friends List for his Le Mobile remote recording truck.

“I did a quick count and realized that Le Mobile has recorded forty-one of them,” says Charbonneau. “Even I found that a bit amazing.”

Of the remaining legends in the elite 20, Little Richard, Al Green and Smokey Robinson still could vocalize though Le Mobile’s meticulously maintained Neve console. All others are unfortunately outside the truck’s travel range, having passed into the Great Beyond.

Laments Charbonneau, “I would have loved to record Elvis, Sam Cooke and Otis Redding, but they were already gone before Le Mobile was even on the road.”

He declined to single out any particular artists from the stellar list: “I don’t have any favorites, and that’s good because it lets me enjoy the music and do the best recording, no matter what the style of music. I enjoy it all, but it helps if it’s really good.”

Although he feels the Rolling Stone listing is generally “fair and balanced,” Charbonneau does feel that the magazine’s grouping was somewhat arbitrary.

“They’re all great, but I’ve recorded some amazing performances by singers like Gwen Stefani and Peter Gabriel, who didn’t make it. Why not? Maybe it’s good that I don’t have to decide, or it would be a very long list.” 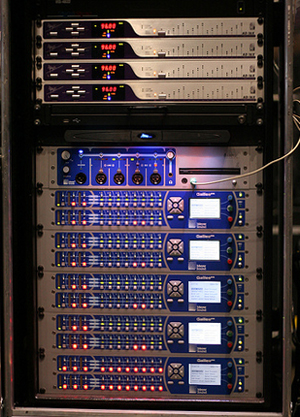 Gwen Stefani and Charbonneau listening to her performance for the AOL Session promoting her record “Love Angel Music Baby”.

For more than three decades, Le Mobile has been recording live concerts and film scoring sessions across North America. Both the truck and owner/engineer Charbonneau have received numerous industry awards, including an Emmy Award and dozens of gold and platinum albums.

Le Mobile’s stock of fastidiously maintained equipment includes the best of the analog and digital domains, comprising a classic Neve 8068 console (with outboard modules for 112 total channels of Neve preamplifiers), 96 channels of Pro Tools HD, and a pair of mint-condition Studer A800 analog recorders.

Originally launched in Montreal, Le Mobile is now headquartered in the Southern California community of Carlsbad.

Cites ASP4816 analog console’s hybrid capabilities as a primary reason for its selection for his Surrey, England recording facility.