Though it's a permanent install, it's designed, even aesthetically, like a touring rig

Mention the name Queen Elizabeth Theatre to Canadians in the concert industry and their minds immediately head west to the grand old dame of Vancouver theaters.

Toronto, however, has a venue of the same name. Not as well known perhaps, or as celebrated, but certainly with a rich history of its own.

Designed by Peter Dickinson, and built by Page & Steele architects in the mid-1950s, the theater is located near the waterfront on the grounds of the Canadian National Exposition, it has, over the last 20 years, fallen off the local radar somewhat, but if owner, Bruno Sinopoli, and Technical Director, Mark Prinsloo have their way, that’s going to change.

Traditionally the CNE grounds are considered a bit off the beaten track for the city’s music fans. Recently though, the rapid development of live/work loft spaces in nearby Liberty Village, and the revitalization of West Queen West and Toronto’s Parkdale Village has been bringing concert goers closer all the time.

Both take an extremely hands on approach to their projects. When I meet Sinopoli he’s mopping the stage floor. “This is Bruno,” says Prinsloo, by way of introduction. “He owns the place.” After opening the successful Mod Club on Toronto’s College Street strip in the hear of Little Italy, the two were looking for a larger venue, and for Sinopoli the purchasing the QE was a no-brainer. He essentially walked in, took one look, said “I want it,” and that was it.

Refitting A Landmark
At first glance you can see why he was impressed. The 1,250 capacity theater not only had good bones, it required minimal structural work and no additional acoustic treatments.

Well outfitted for both artists and crew there’s plenty of room for everyone to get work done on show day – including five artist dressing rooms and dedicated office space for promoters, production and local crew. And, refreshingly – a loading dock with plenty of space around it – rather than the cramped alley/obstacle course that characterizes the load at some older theaters.

Instead of the usual balcony area the QE features an area of rear seating banked at a 30-degree angle and surrounding the primary Front of House mix position. If undersold, the area can be covered entirely with black curtains laid directly on top of the seats, so as not to impact sound. 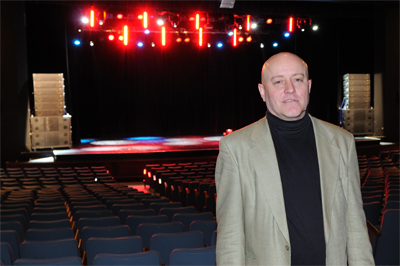 Above that, there’s a small VIP room, formerly the old followspot position and the only real renovation undertaken in the theater proper. The actual purpose of the VIP area, i.e. who gets it and why, speaks volumes about the kind of experience the two wanted to provide patrons.

“We don’t actually sell it,” says Prinsloo, “we give it away.” Aside from knocking out some offices adjacent to the lobby to create a bar area, that was all they did in terms of renovation – between the bar and lobby they have an audience holding tank that can comfortably hold approximately 1,000 people.

Read More
Microfiles: The Primo UD-863, A Distinctive (Looking) Microphone Circa The 1960s

“We try to make people as happy as possible here,” Prinsloo explains, and not just the audience, but artists and their crews as well.

Anybody who’s spent anytime on the road has experienced the feeling of being unwelcome in someone’s house. For whatever reason, that happens more often in theaters than in your average large bar. You know the feeling – you load in, and even before you start unpacking your kit, heads start shaking. The roadblocks start going up and the words “You see, what we do here…” come out of someone’s mouth. Not here.

Good vibes wouldn’t be worth much, however, if the venue’s production wasn’t up to snuff. “To launch a venue this size, you have to be very good, or you’re not going to make it. That’s why we put all the effort into the sound and lights,” Prinsloo explains. 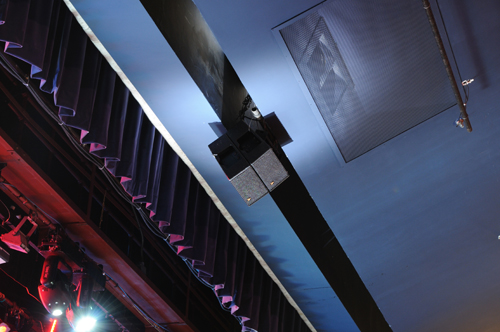 The Adamson Metrix loudspeakers mounted on the venue’s proscenium to supplement the system’s center coverage. Click to enlarge.

Based on his experience at the Mod Club, Prinsloo chose Adamson products across the board: 12 Adamson Y-10 line array modules, four Adamson T21 subwoofers and two Adamson Metrix loudspeakers flown in front of the proscenium as a center fill for frong of house; and Adamson M15 bi-amped monitors in tandem with two SX18’s for sidewash.

The amp package, a mix of Lab.gruppen fp 6400 and QSC 2450 were chosen based on both power and price point. “The Adamson T21 subs have two 21-inch loudspeakers. Each of those loudspeakers wants to see 3,000 watts, and the Lab.gruppen’s the only amp that’s going to give you that. There’s 24,000 watts of low end,” Prinsloo says.

At first glance it seems odd that the PA isn’t flown. “There’s a firewall that has to be able to fall and we had to get a bunch of engineering drawings done for that and we just haven’t had the place long enough to get it,” he explains.

But stacking the PA on large, wheeled platforms hasn’t negatively impacted sound. And while they’re still considering flying it, the system – as is – speaks to another aspect of the venue important to Prinsloo’s vision.

Flexibility, he explains, is what sets the QE apart from similar rooms. Both front of house and monitor rigs, stacks, racks and two Yamaha consoles – a PM 4000 and PM 3500 respectively – can be moved relatively easily to accommodate an incoming act desire to augment production, or bring in their own. A secondary mix position dead center of the final three rows of level seating further enhances that flexibility.

Though it’s a permanent install, it’s designed, even aesthetically, like a touring rig. “The consoles are still in the road cases and the FOH rack is a touring rack; using multi-pin cables and connectors so that it could be torn down in a hurry,” explains Westbury National Show Systems’ Mark Sandolowich, who provided a good portion of the system.

Although Sandolowich made some suggestions to Prinsloo based on Westbury’s current inventory – namely some Dolby Lake crossovers they had in overstock – he stresses that Prinsloo knew pretty much exactly what he wanted. 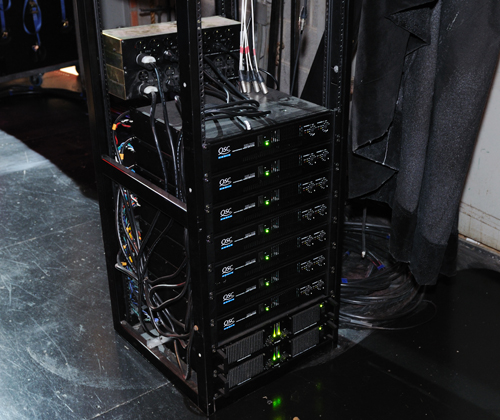 QSC 2450 and Lab.gruppen fp6400 amplifiers provide power to the Adamson system on each side of the stage. Click to enlarge.

“It’s not like no expense is spared,” adds Sandolowich. “They had to think carefully about how they spend their money.” That meant spreading the money around to get the most bang for the buck and a system that measured up to the demands of virtually any incoming artists’ technical riders.

“He knows our gear and we’ve been working together for years,” says Sandolowich. That knowledge helped keep costs down, allowing the duo to agree on a combination of new and rented equipment from Westbury’s inventory. “Half the clubs you run into in the city, they’ve got a lot of stuff, but when they get down to gates and comps they put in a bunch of junk.

“There’s none of that in this rig, it’s all high quality components.” From mic pack to processing, to overall sonics, the common denominator was doing right by both artists their techs, and their audiences.