In The Studio: Six Editing Tips For Solid Natural Tracks

Some tips for tweaking track timing in you DAW from the 3rd edition of The Mixing Engineer's Handbook.

Mix engineers are called on to do so much more than ever before.

Tweaking the track timing used to be done way before the mixing stage, but mixers find themselves doing it more and more.

Here are some tips for tweaking track timing in you DAW from the new Advanced chapter in the 3rd edition of The Mixing Engineer’s Handbook.
————————————
No matter how great the players on the session are, there’s always some portion of a recording that doesn’t feel quite right.

Usually, the timing of the basic tracks will be tweaked right after your tracking session so you have a solid rhythm section to overdub against, but if you’re just now discovering some sections of an overdub that don’t feel right (which happens more than you might think), prepare for the joys of slipping and sliding time.

Here’s a list of some of the do’s and don’ts for tweaking the track timing.

Don’t Edit By Eye.
In most music (electronic music being the exception), you can’t successfully edit by just trying to line everything up to the kick and snare or the grid and still have it sound natural and human. Often times, tracks that look perfectly lined up don’t sound or feel right, which is why listening is more important than looking. Turn your head away from the monitor or close your eyes and just listen before and after you move anything.

Every Beat Doesn’t Have To Be Perfect.
In fact, if it’s too perfect, you’ll suck the life out of the performance. Unless something really jumps out as being out of time, you might get away with leaving it as is. Another way is to just line up downbeats and any major accents, which gives you the best of both worlds; a loose feel that still sounds tight.

Copy And Paste Another Section If You Can.
If you have to make too many edits to a particular section, chances are it won’t sound as good when you’re finished as just finding a similar section in another part of the song and pasting it in over the area that’s suspect. It’s a lot faster and easier to do, and will probably sound cleaner and groove better as well.

Everything Doesn’t Have To Line Up Exactly.
Many times the bass will speak better if it’s a few milliseconds behind the kick drum rather than right with it. It still sounds tight, but both the kick and bass will be more distinct and the sound may even be fuller.

Listen Against The Drums.
If you listen to the track that you’re editing all by itself, you can be fooled into thinking that the timing is correct when it’s not, especially if you’re editing to a grid. The real proof is when you listen against the drums. If the instrument sounds great by itself and great with the drums, you’re home free.

Trim The Releases.
This is one of the best things you can do to tighten up a track. Everyone is hip to tightening up the attacks, but it’s the releases that really make the difference. Regardless if it’s an accent played by the full band, the song ending, or a vocal or guitar phrase, make sure that the releases are pretty much the same length. If one is longer than the rest, trim it back and fade it so it sounds natural. If one is a lot shorter than the rest, use a time correction plug-in the lengthen it a bit. 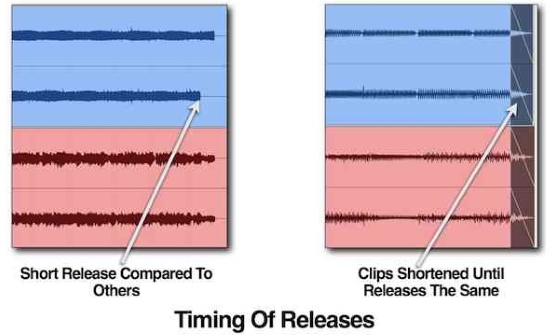 Of course, if you’re using loops or MIDI instruments, you’ve probably quantized things to the track by now. If you haven’t, remember that if it’s too perfect to the grid it may not sound natural.

You can read and comment on the original article here. Read more from The Mixing Engineer’s Handbook and my other books on the excerpt section of bobbyowsinski.com.

Bobby Owsinski is an author, producer, music industry veteran and technical consultant who has written numerous books covering all aspects of audio recording. For more information be sure to check out his website and blog. Go here to check out The Mixing Engineer’s Handbook.

Bobby Owsinski is an author, producer, music industry veteran and technical consultant who has written numerous books covering all aspects of audio recording. To read more from Bobby, and to acquire copies of his outstanding books such as The Recording Engineer’s Handbook, be sure to check out his website at www.bobbyowsinski.com.
All Posts
PrevPreviousDJ/Producer Robin Schulz To Perform In Sennheiser’s AMBEO 3D Audio
NextPositive Grid Releases BIAS Amp StandaloneNext
Top Stories
Explore All Study Hall