“If there’s anything good to be said about the days when we were doing console du jour,” Leonard confides, “it’s that for better or worse, it really got my skills finely tuned on every board you can imagine.

“The downside was that in terms of consistency on a night-to-night basis, I was just banging my head against the wall most of the time. For one show I’d be in the digital realm and have the luxury of using 30 compressors. Then the next night I’d find myself on an old analog desk and be limited to 12.”

With the Midas desks, Anderson concurs that consistency has gone up by an order of magnitude, and provided them with the tools they need to make things sound good at any stop.

“This band has solid musicianship, and the gear they play is outstanding,” he says. “Helping us to economize once again while still obtaining superior fidelity, the Midas consoles give us everything we need to capture that sound and reproduce it accurately right out of the box.

“With other consoles we considered we would have conceivably wound up paying thousands more for plug-in bundles to make that happen. We just can’t do that, and rightly shouldn’t, even if we had money to burn.” 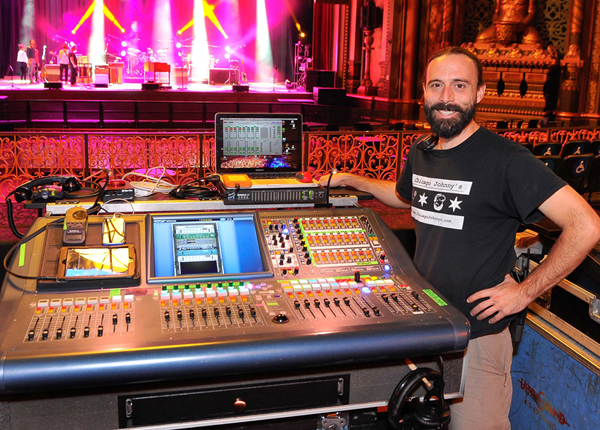 Front of house engineer Sam Leonard with his Midas PRO2.

Very Straightforward
Onstage, most of the musicians have opted for in-ear monitoring. Wedges are still part of the mix too, however, and when combined with the presence of guitar cabinets, make for an environment Leonard describes as “still kind of loud.” In-ear systems employed are a “nice mixture” in Anderson’s estimation, all of which are from Ultimate Ears, and range from the UE11s Grace Potter uses to UE7 and UE5 models.

“I run my end of the show in a very straightforward fashion,” Anderson explains. “Grace doesn’t ask for much, she isn’t effects or compressor heavy. I mix her ears just like I would the entire band if I was at front of house, she loves hearing everything. Whatever effects I do use, I use internally from the console. Simple plate reverb for the drums, a couple of hall reverbs – one as an instrument reverb, the other for vocals – and then two more ‘verbs for vocals: one for Grace and another for background vocals. I like to keep those separate using different parameters, and I also run a stereo delay on Grace – she basically likes that just for the fun of it.” 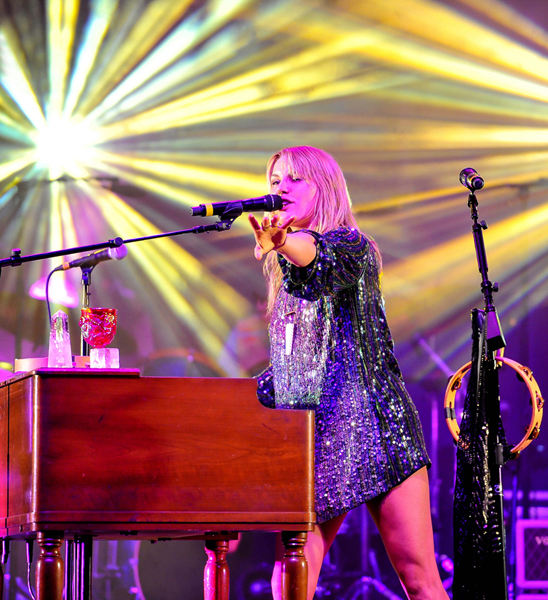 Potter is also a multiinstrumentalist, playing Hammond B3 and guitars.

Beyond those effects, Anderson runs a little compression on the ear mixes, and that’s about it. Midas POP groups are also a favorite – he places all of the guitars on one page, all of the drums on another, vocals on their own page, and so forth. Running the show this way makes it so much simpler, he says, because he doesn’t have to flip through myriad pages looking for his inputs.

Anderson feels it’s not a stretch at all to compare this show to a Bruce Springsteen concert, as at any moment Potter can step up to a talkback mic and divert from the set list entirely.

“That’s why I don’t run any sort of snapshots whatsoever,” he adds. “My snapshots are pretty much in my head. At this point I have a really good sense of what every band member needs as far as changes go. I keep a close eye upon my gain structure and make changes as we go along, my hands are always pushing faders. At the end of the night I save the settings from every show and file them according to the city we’re in. We use these files merely as a reference if someone wants to replicate or experiment with a certain sound.”

Gregory A, DeTogne is a writer and editor who has served the pro audio industry for the more than 32 years.
All Posts
PrevPreviousGeorgia’s Woodstock City Church Selects Waves
NextDave Darlington: Mixing in ManhattanNext
Top Stories
Explore All Study Hall