Expanding Horizons
Inputs start out front at Potter’s downstage center position, where a Shure UR wireless transmitter outfitted with a Telefunken M80 capsule captures everything from a whisper to a scream that the lead singer can and does routinely dish out.

“When I first started with Grace,” Leonard recalls, “people were making all these comparisons like Tina Turner meets The Rolling Stones, or Janis Joplin fronting The Band. That was true to some degree, but as I spent time with her and she grew and evolved, and then a couple albums came and went, I realized there is a lot more soul and R&B in there than most people realize.

“Tracks from this new record stretch her vocal repertoire even further to include dance and pop-flavored stylings,” he continues. “Along the way to where she is today, she never lost any of her influences. She has merely taken them all in and created something that is truly her own.”

Given the nature of Potter’s voice, Leonard chose the extra tight cardioid pattern Telefunken M80 capsule based upon its presence, ability to cut through the mix, and accuracy in the low/mids.

A Shure KSM9 was initially in the running for the task as well, but with Potter’s proclivity for keeping herself close to the drum kit (and adjacent guitar cabinets), either of the mic’s selectable polar patterns would have essentially picked up everything around it, making it another overhead or guitar mic instead of a vocal one. 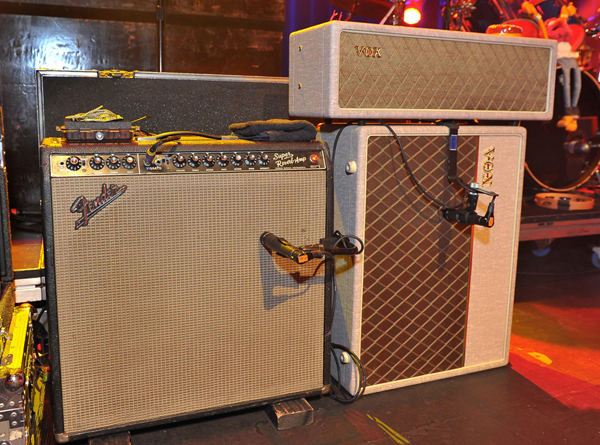 Guitar cabinets, including this Fender Super and handwired Vox AC30, are all miked with SM57s.

Shure Beta 57As are posted at all other vocal positions onstage.  A multi-instrumentalist, Potter plays guitar and a Hammond B3 organ, the latter of which resides with her downstage center, and utilizes a Leslie speaker miked with a pair of Sennheiser 421s at the top and a Shure Beta 52 on the bottom.

With an Ampeg 8×10 cabinet miked with a Shure Beta 52 being the bass player’s choice, lead guitarist Benny Yurco and Potter both use AC30 hand-wired heads and cabinets from Vox captured with Shure SM57s.

Sticking within tried-and-true tradition again, drums start at kick with a Beta 91 inside and a Beta 52 on the outside. At snare top lies a ‘Shorty” Telefunken M80-SH, which is buttressed at the bottom by an SM57. Rack toms, which are played with the bottom resonant heads removed, are captured with Sennheiser e904 cardioid dynamics mounted inside. Overheads are Shure KSM32s. 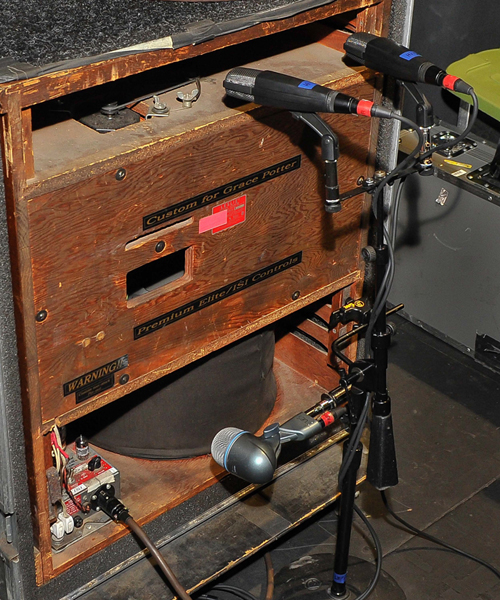 Potter’s Leslie speaker captured with Sennheiser 421s at the top and a Shure Beta 52 on the bottom.

Keyboards universally use Radial J48 DIs. Within keyboardist Eliza Jones’ world, Nord keys, sample patches, and a small MIDI keyboard used almost like a vocoder are sub-mixed down to a Mackie mixer before turning over a left-right feed to Anderson and Leonard.

Mix Priorities
Like Anderson, Leonard has found that the best way to keep up with these musicians is to shun snapshots and mix on the fly. An admirer of the Midas POP groups as well, he concedes the function has changed the way he mixes, allowing him to have anything he wants directly in front of him, and use quick keys to quickly switch between pages.

First and foremost for Leonard within the house mix is vocal intelligibility. “That’s the one thing every crowd comes out for, to hear what she’s singing,” he says. “Beyond vocals, I want the mix to be exciting. I use a lot of low-end to get people moving, but I don’t want to hurt anyone. 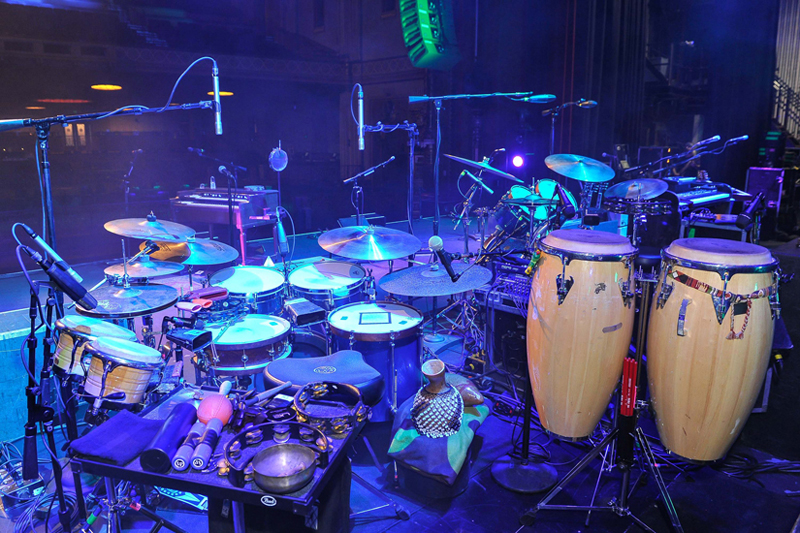 “I tend to think of the sound I’m trying to achieve as an analog one, even though we’re very much in the digital world. This music demands a vintage, even retro feel, but it needs to be modern at the same time.

“Also of importance is the foundation of drums and bass, and I mix guitar a little louder than some do these days. We really try to keep her in a rock vein. People constantly tell us how refreshing it is to see and hear a real band without endless Pro Tools and backing tracks. You won’t find any of that here, we’ve purposely avoided it since the very beginning.”

Gregory A. DeTogne is a writer and editor who has served the pro audio industry for the past 32 years.div class=