Audio teamwork for Peter Gabriel and Sting on the Rock Paper Scissors Tour.

Prior to this year, the last time Peter Gabriel and Sting toured together was in 1988 as part of a string of Amnesty International concerts. Also featuring Bruce Springsteen, Tracy Chapman, Youssou N’Dour, and a bevy of other guest artists, the 20 benefit shows brought a stellar array of talent together as distinct co-headliners.

In contrast to those dates, this year’s Rock Paper Scissors Tour stands completely apart. Rather than co-headlining this time out, it would be more accurately stated that the pair amalgamated their best efforts and coalesced into a new whole.

Sharing the same stage and collaborating throughout a two-hour-and-40-minute set, Gabriel and Sting – as well as their individual bands – swapped lead parts, harmonized on choruses, blended, weaved, and intermingled as the concert galloped through a jointly-authored songbook of hits that played to sold-out audiences for several months.

Just as Sting did an admirable job of taking over lead vocals on Gabriel’s “Shock the Monkey” and the latter added darkly rich vocals to many verses within the former’s “Englishman in New York,” the audio crew for both acts melded in mutual cooperation to develop a sonic blueprint that had the front of house engineers for both bands mixing simultaneously from their respective consoles.

“The way this show worked is that whatever we did as individuals we did for the betterment of the entire show,” Sting FOH engineer Howard Page related a few months after the tour launched on June 21 in Columbus, OH. “It wasn’t a competition to see whose mix was better or louder. It was the whole that counted. You had to set aside all ego. Everything had to be understood from this perspective, and we had ground rules by which everyone abided.” 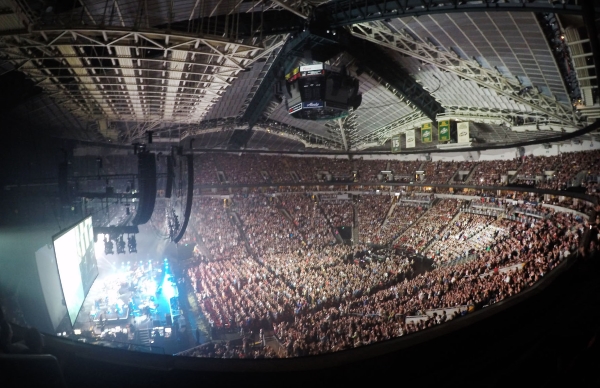 Blending It Together
Page, who mixed Sting from behind a Studer Vista 5 console using control provided by Clair Global, was joined at FOH by Richard Sharratt at the Gabriel helm, utilizing a Solid State Logic L500 Plus desk for his work. Sharratt relied upon a control schematic supplied by Firehouse Productions (Redhook, NY), the same entity that took on the task of building the PA.

With the capability to distribute audio evenly across a 270-degree path, the house system was headed by L-Acoustics K1 and K2 enclosures supplemented by K1-SB and SB28 subwoofers, joined by a contingent of Kara and ARCS loudspeakers. Sixty LA8 amplified controllers delivered amplification, DSP, and network functions to the design using L-Acoustics proprietary L-DRIVE system protection and IIR/FIR filter algorithms.

Firehouse system engineer Jamie Pollock recently noted on ProSoundWeb not long ago that one of his biggest challenges on the tour was configuring the system to accommodate both Page’s and Sharratt’s individual styles of mixing. “Each FOH console had eight sends that went into a pile of Lake DLP processors,” he says, explaining how he managed the twin-console quandary, “which is where all the summing happened. From there it went into a (Riedel) RockNet (networking) system that sent everything to the LA8 amplified controllers.” 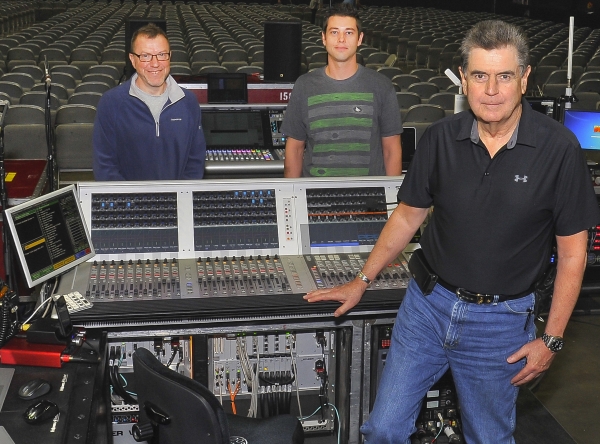 From his standpoint, Sharratt concedes that while he and Page worked extremely well together, it was Pollock who had the ultimately responsibility of keeping the pair happy. “The two different styles of music had very different requirements,” he notes. “So Jamie would find us a good middle ground each day, and then Howard and I would EQ our respective PA feeds to meet our individual needs.

“An internal eight-way GEQ inserted over the PA outputs proved to be the most effective and quickest method for me to rise to the task. Generally speaking, for each gig I would end up pulling out 1.6 to 3.15K to lose some of the edginess, and Howard would put a slight low/mid shelf on his output to achieve the clarity he desired. For outdoor shows, having an EQ like that to grab as the atmospherics changed was also very useful.”

Within the Lake-based summing matrix everything was active all the time. This was made possible by configuring the board groups on each of the FOH consoles to deliver separate feeds to the PA so that at any given moment any combination of the performers could be heard.

“There were no crossovers, no system EQ, tuning, or anything else involved within the summing matrix,” Page relates, describing the process further. “On my console I only had Sting inputs. But once I fed the PA, everything I sent summed with the content of Richard’s desk. I did my thing and Richard did his, and provided we had an understanding between us of how the overall dynamics and volume would go, the interplay heard among the performers onstage was seamless.

“It was complicated to set it all up the first time – you have to be very careful to match levels and whatnot – but once everything is dialed-in it’s set it and forget it for the rest of the tour,” he continues. “You never have to touch it again. There were a lot of songs where both bands played together. At that point Richard and I were mixing not only to the system, but to each other. In situations like this it blends very well together, as long as everyone including the performers knows what they’re doing.”

Gregory A, DeTogne is a writer and editor who has served the pro audio industry for the more than 32 years.
All Posts
PrevPreviousBiamp Systems Announces New Staff Promotions
NextIn The Studio: Five Lessons From A Grammy WinnerNext
Study Hall Top Stories
Explore All Study Hall