Audio teamwork for Peter Gabriel and Sting on the Rock Paper Scissors Tour.

In The Spirit Of Things
On stage, vocal microphones included Audix OM6s, a choice made based upon their rejection of background noise, clarity, and accuracy.

Drum mics were what one might expect plus a little more: Sennheiser E901 and Audix D6 on kick, SM57s and Beta 57s on snares, Audix D4 and Sennheiser MD 421 on toms, Schoeps CMC6/MK4 on hat and rides, AKG C414s on overheads.

Longtime Gabriel guitarist David Rhodes miked his cabinets with Sennheiser MD409s, while Tony Levin’s bass and bass keys were on DI. Everything else was run direct.

Continuing in form and function with the tour’s spirit of collaboration, the monitor set on Rock Paper Scissors spread itself across a sprawling sonic landscape where David Staub (Sting), Dan Ungaretti (Gabriel’s band), and Dickie Chappell (Gabriel) held court.

Sting and his band (including Vinnie Colaiuta on drums and vocalist Jo Lowry) received their stage mixes from Staub, who rode herd over a Clair Global rig with the help of an Avid S6L mix system, Clair 12AM and CM22 wedges, R4 side fills, and 12 channels of Sennheiser 2000 Series IEM units with double beltpacks for each channel. 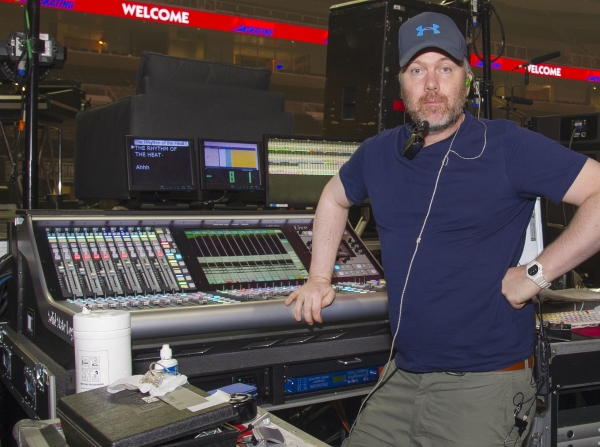 “I’d been mixing Sting on an Avid Profile,” Staub notes, “so it seemed like a logical move to use the S6L, as I could load my Sting band show file onto it, and then just simply add all the extra inputs and outputs I needed for this larger show. As we configured it, anyone in either Sting’s or Peter Gabriel’s band could hear anyone else from either band.

“The Peter Gabriel monitor engineers had a full split of both bands, as their split was done in the digital domain. I chose to receive as many as 22 analog stems from Dan Ungaretti – we were both on stage left right next to each other – and that allowed me to offer my band individual control over each Peter Gabriel band member’s vocals and instruments.” 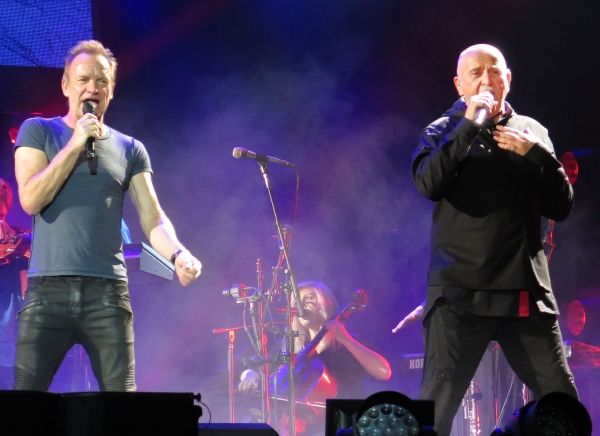 The dynamic duo was joined by up to 14 musicians. (Credit: Peter Hutchins)

Everything In Its Place
Over on the Gabriel side of monitors, both Ungaretti and Chappell used SSL L500 Plus consoles to direct mixes across 16 channels of Sennheiser 2000 IEMs and 14 channels of Shure UHF-R wireless mics and instrument beltpacks. With a Dante network running between the two expansion card-equipped monitor desks and the FOH console, submixes, effects, and shout mics could easily be shared using 16 channels of send/return.

“We may have had full IEMs on the Peter Gabriel side of the stage,” Chappell says. “But with the wedges and side fills on the Sting side, plus a large bass speaker he uses, we had a louder stage than normal for us. We got it all to work regardless, and kept to our core commitment of having all of the stage inputs coming to our SSL consoles from both bands. We didn’t want to run any groups or stems, as Peter’s detailed approach to things requires that kind of flexibility. He wants to be able to hear any individual input or mic, and regularly asks to.” 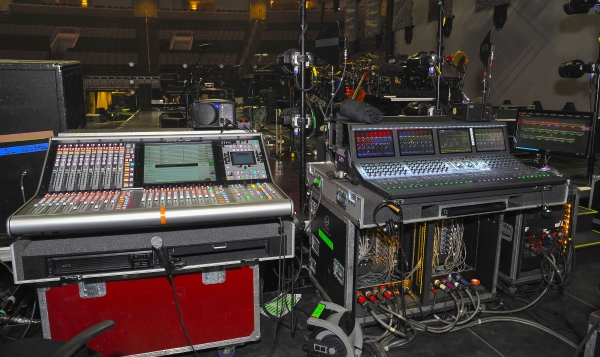 Back out front, Sharratt’s SSL L500 Plus was called upon for internal effects such as band reverb, tap delays, backing vocal reverb, SansAmp distortion, and more. He also kept a pair of Bricasti M7s at hand, one for Gabriel’s vocals and another for drums, both of which were fired by MIDI program change.

“I think it’s fair to say that we all entered this project with some trepidation,” Sharratt states, underscoring its complexities and sheer scope. “At first none of us knew how it was going to work out on any level. Right from day one in rehearsals, however, Howard and I agreed to give each other the space we needed. If it was a Peter Gabriel song I would call the shots, and if it was a Sting song Howard had final say. The bands were simultaneously working things out among themselves in a similar fashion, and often what worked best for them was a case of less is more.

“Rule number one was to leave room for the two lead vocals, then to use caution when adding things into the other person’s mix. In the end, I kept my vocal upfront, maintained clarity without being abrasive, and kept things warm, with body and depth. I had great inputs to work with, and a little EQ was generally all that was needed to find a place for each element in the mix, along with light compression on the backing vocals and staying on top of Peter Gabriel’s vocals.”

Gregory A. DeTogne is a writer and editor who has served the pro audio industry for the past 32 years.

Gregory A, DeTogne is a writer and editor who has served the pro audio industry for the more than 32 years.
All Posts
PrevPreviousBiamp Systems Announces New Staff Promotions
NextIn The Studio: Five Lessons From A Grammy WinnerNext
Study Hall Top Stories
Explore All Study Hall