Of all the tools my company brings to shows, computers (in laptop form) are certainly among the most important. They allow us to edit and play back music tracks, convert audio file formats, measure/analyze audio, and evaluate/monitor the RF spectrum and coordinate frequencies for wireless systems. We can also get equipment manuals and quick start guides, surf the web during downtime and even record the gig.

Whether it’s a Mac or PC doesn’t matter as long as it helps make the client happy. Our choice is PC, normally two on a show. Both contain the same software; one is tasked as the main audio player and the other usually runs measurement software while also serving as the backup audio player and fulfilling a range of distinct functions to that particular gig.

Streamlining Things
For years we utilized Instant Replay by 360 Systems for audio playback. These hardware machines are very common at corporate shows and in the broadcast world. Instant Replay provides playback at the push of a button, and with 50 buttons on its face and 20 banks, there are 1,000 tracks at your fingertips.

The downside is the necessity to load the files into the machine as analog files or AES – no plugging in a thumb drive directly to transfer files. It also only allows basic “heads and tails” editing, and if you have to fly to gigs, it’s another large hardware device to lug around.

A few years ago, we switched to Sports Sounds Pro software. Already carrying at least two computers to gigs, it made sense. The software lets us load buttons on the computer and click on them with the mouse (or set up keys on the keyboard as hot buttons). With 10 banks of 10 pages, and 48 buttons per page, it supplies a whopping total of 8,640 user-configurable buttons.

Unlike hardware units, these buttons are labeled with the track name and run time so we don’t need cheat sheets or board tape. Files are played from their folder(s) located anywhere on the computer as well as from a hard drive or thumb drive. Pages and buttons can be color-coded to keep things better organized. 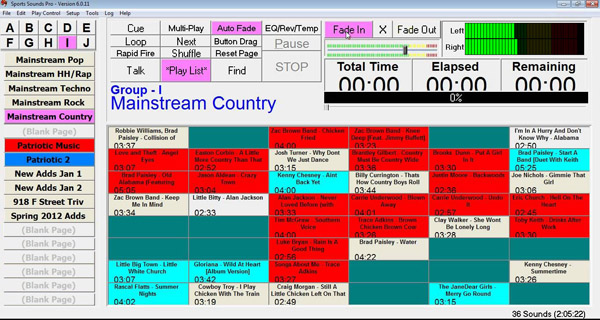 With Sports Sounds Pro, audio files can be played at the click of a mouse or via “hot buttons” set up on the keyboard.

In addition, a feature called Instant Play scans a file and listens for audio, then plays the file from the start of the audio, no editing the “head” of a track, which is perfect for when you’re handed a file at the last minute. Clients hand these to us all of the time. We download the file(s) into a labeled folder that’s usually located on the desktop so that it’s easy to find.

Then we convert the file(s) to Wave (.wav) format using Switch Audio File Converter from NCH to convert the files. The program can convert between more than 40 audio file formats, and can also extract files from (almost) any media. NCH offers a free trial if you’d like to check it out (www.nch.com.au), and the company also offers a range of other software for editing, recording, mixing, ripping and burning CDs. 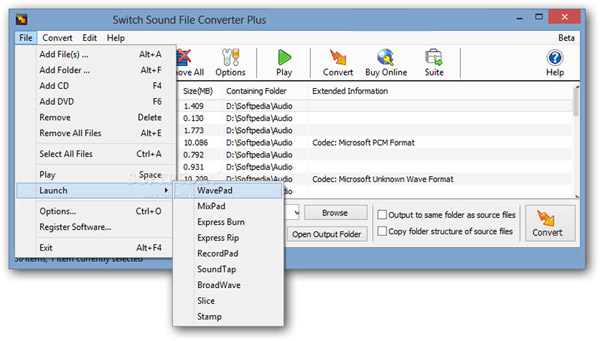 A look at Switch Audio File Converter from NCH.

The label for the folder on the desktop includes the client and/or show name, as well as the date. Then if needed, the tracks can be quickly called up and edited (including implementing client requests). For this we use free editing software called Wavosaur (www.wavosaur.com) that handles .wav (and MP3) files. It also accommodates recording, so when there’s the need to create announcements for a client, it’s quite handy for one-stop record/edit.

Typically the only editing that’s needed on client files is trimming any dead space before the audio starts, but sometimes the track needs to start at a particular spot or be edited it to a particular length. The final thing to make the track(s) ready is to normalize it/them (via Wavosaur). Normalizing them all to the same level eliminates having to ride the faders for each cut. 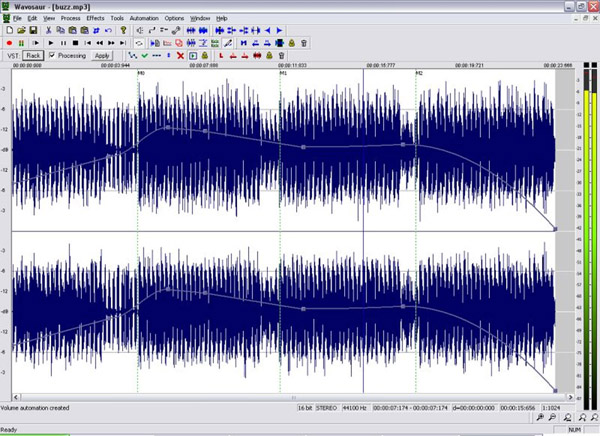 Opening Sports Sounds Pro, all normalized tracks can be assigned to their own buttons. It’s also a good idea if there’s time to test each track through the PA. For a single track this process takes just takes a few minutes for conversion, editing, normalizing and loading into the play, way less time that it took to load a track (let alone more than one track) into a separate hardware device. (Go here for more info about the prep and applications of tracks.)

Craig has worked in a wide range of roles in professional audio for more than 30 years in a dynamic career that encompasses touring, theater, live televised broadcast events and even concerts at the White House. Currently he owns and operates Tech Works, a regional production company that focuses on corporate events based in Reno.
All Posts
PrevPreviousNeal Schon on Why Sound Matters to Artists
NextIn The Studio: Al Schmitt’s Microphone ApproachNext
Top Stories
Explore All Study Hall