Church Sound: Always Too Quiet or Too Loud?

A method for adapting listening levels for subsidiary rooms of various sizes...

One of the things I love about working in live sound is the dynamic range available.

It’s not unusual for me to mix a song that starts out quiet and eventually builds to a crescendo 20 dB higher. That kind of range can feel great in the room, heightening the music’s emotional impact.

Music, however, is just the tip of the iceberg in modern worship services. The services I mix every week run the gamut from conversation-level speech up to what I would consider the lower-end of concert-level music.

This typically adds up to about 30-40 dB of dynamic range. This range feels great and natural inside the room, but here’s the challenge: not everybody listens to the mix in my room.

My first priority is always mixing for the folks who are actually in the room, in the seats. But there are various other locations where the mix may be heard, including hallways, video control rooms, and online webcasts.

Each of these locations is likely to be smaller than my 2,700-seat auditorium, and the listening level is also likely to be much lower. 30-plus dB of dynamic range may work in the main room, but will be too much in those smaller environments that need a more even-level, broadcast-style mix.

The first thing I do to achieve this is to get the levels of different programming elements as close together as possible. Music, spoken word, and playback elements such as videos all sit at different levels in the room. I like to level these out by assigning them to different busses feeding into the matrix section of the console.

But this is just the start, because there can still be a lot of dynamic range within the mix. For example, if I have a vocalist going full bore one minute and speaking softly the next, there will be a wide dynamic range to deal with. To solve this issue, some engineers might try to use a traditional compressor or limiter in order to “turn down” the loud sections of the overall mix. Believe me, I’ve tried that. The problem is that the amount of compression needed to make this work typically leads to undesired compression artifacts.

This is where a Waves MaxxVolume plug-in comes in.

Setting up MaxxVolume in order to convert my house mix into a broadcast-style mix was pretty easy thanks to the virtual sound check feature of my Avid VENUE. It also helped that I had some tracks left over from a previous service.

I started by taking off a couple dB using high-level compression. A small amount of compression on a mix can really help glue the overall mix together and give it a more finished sound. The next step was to even out the large dynamic swings within the mix; my not-so-secret weapon in taming these dynamics is MaxxVolume’s low-level compression section. 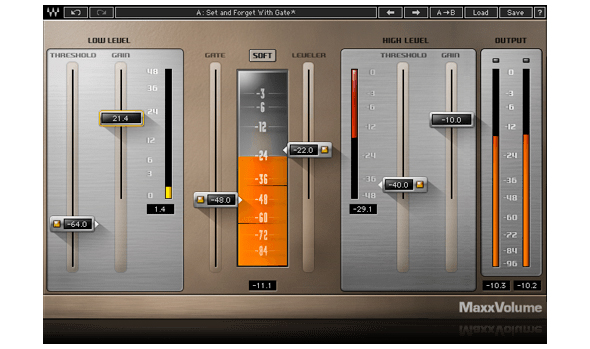 The Low Level section works almost like parallel compression directly within the plugin. One of the reasons parallel compression has become widely used in mixing is its transparency in usage. And this is exactly what MaxxVolume’s low-level compression offers. It is a powerful tool for making quiet sounds louder without clamping down on the loud sounds.

For starters, I set the Low Level gain to 20 dB. Now that’s definitely a lot of gain, but between the band running full out and a vocalist speaking softly, that’s the kind of range I knew I would be dealing with at times. I then played back some of the quieter parts of the service while bringing up the Low Level threshold, until the overall mix felt consistent throughout the service. My final step was to set the Leveler around the average level of the mix and put it in Soft mode.

When our video team mentioned they weren’t chasing the volume in the control room anymore, I knew I was on to something. I recently did a spot-check on the feed, and all the different elements still flowed together seamlessly. I’ve been using the same settings for over two years now, which says a lot about the power of this plugin for a tweak-o-holic like me. This thing just works.

MaxxVolume is one of my favorite dynamics processors because of the versatility it offers on a variety of sound sources and challenges. If you haven’t added MaxxVolume to your collection, I strongly suggest you check it out.

David Stagl serves as audio director at North Point Community Church in Alpharetta, GA, and is also the author and publisher of the Going To 11 (www.goingto11.com) blog, which is full of excellent audio “how to” and advice.

All Posts
PrevPreviousPro Audio Haiku—There’s A Bit Of The Poet In Us All…
NextLive Sound Loudspeaker Demo At USITT Coming Up This Week!Next
Top Stories
Explore All Study Hall