Aligning A Subwoofer With Full-Range Loudspeakers

I’ve heard the question “How do I align a subwoofer with a full-range loudspeaker system?” asked many times, and thought it might be interesting to delve into this to see if I could come up with an answer.

The task of adding a subwoofer to a loudspeaker system to increase the low frequency bandwidth should typically entail three primary items.

It is this last item that is perhaps the most challenging. This is the one that we will primarily investigate. We will also look at the first item briefly.

With these taken care of, item two should not be too much of a problem.

Loudspeakers, by their nature, are band pass devices. To simplify the measurements and make it easier to see what’s going on with the graphs I will use high-pass and low-pass filters instead of actual loudspeakers. The results will be the same with one exception—microphone location.

Since our examples don’t use a microphone (only electrical measurements) it can’t be moved to a different location. This can be much more critical for measurements at higher frequencies as the directivity response of a loudspeaker will lead to differences in the measured response of a device at different locations. For devices that are for the most part omnidirectional in the lower frequency region this will not be an issue.

There is another issue, of which one should be aware, concerning microphone placement that could lead to measured differences. That is the potential change in path length from the two devices under test (lower frequency device and higher frequency device) to the measurement microphone (or the listeners’ ear). At one mic position there may be very good summation.

At another location, where the path length difference has changed by one-half wavelength of frequencies in the crossover region, there will be a notch (cancellation) in the summed response. When making field measurements it is advisable to place the microphone(s) in position(s) that are typical of magnitude and arrival time differences to which most of the intended coverage area will be subjected.

Let’s imagine a hypothetical system that has a full-range cluster that reproduces 60 Hz – 14 kHz adequately. We will add a subwoofer that is physically displaced from the full range cluster. The subwoofer reproduces adequately down to 30 Hz. These response curves are shown in Figure 1. 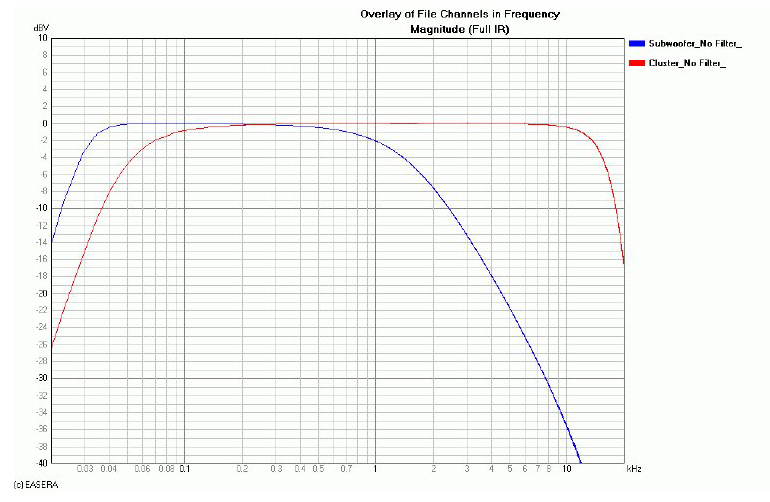 This is not the case for the cluster, however. Its output is already beginning to decrease with decreasing frequency through the intended crossover region. We will need to apply an electrical filter that, when combined with the natural response of the cluster, will yield an acoustical output that matches a 4th order Linkwitz-Riley filter with an fc of 100 Hz.

Figure 2 shows the natural output of the cluster and the target Linkwitz-Riley response along with the cluster’s output after it has been high pass filtered. A 3rd order Butterworth high pass at 115 Hz was used to get this response. 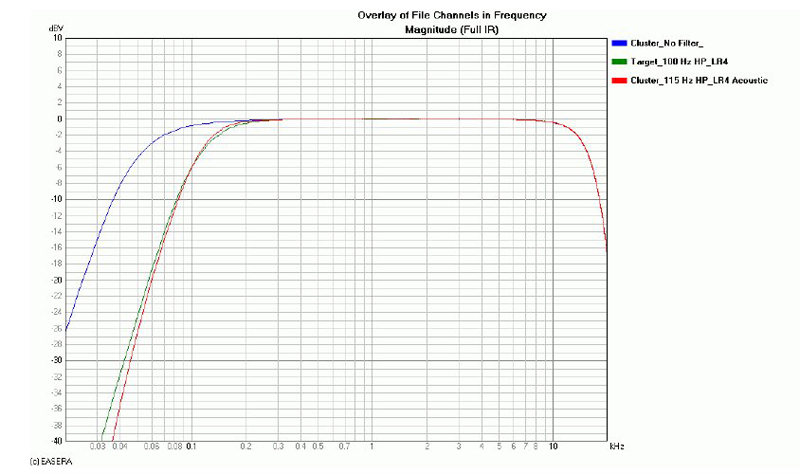 A lower fc and a parametric EQ filter might be used to achieve a more exact match. The response shown will be close enough for our purposes.

When the outputs of the two devices are combined we get the responses shown in Figure 3. The summed magnitude response is not at all what we want. It is clear that something is causing cancellation. 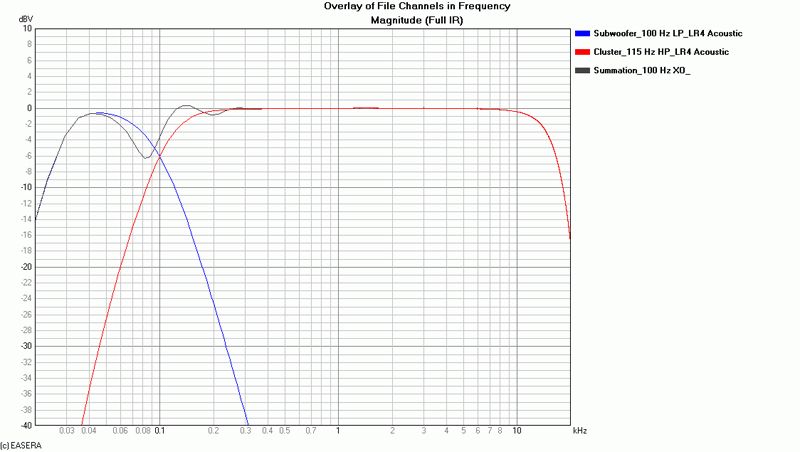 We know that the acoustic Linkwitz-Riley response of each device should sum to a flat response. Since it doesn’t, this would seem to indicate the problem is a misalignment of the two devices in the time domain.

Looking at the Envelope Time Curve (ETC) of the pass bands (Figure 4) confirms that they are not synchronized. We need to delay the cluster, but by how much? 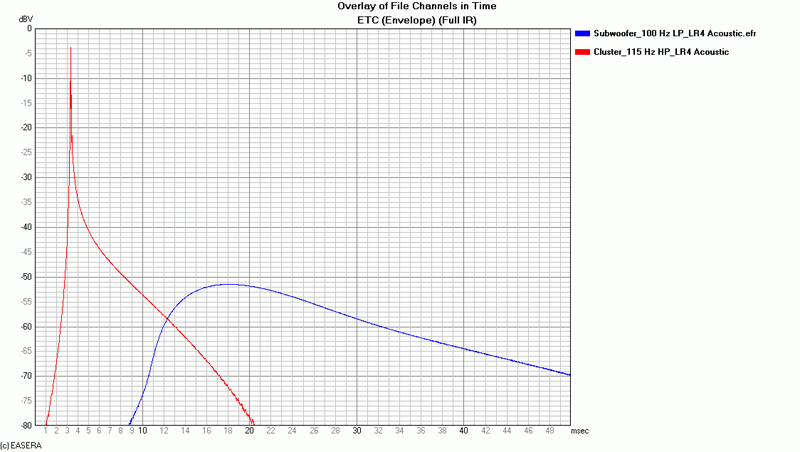 Alternatively we might choose to try to place the arrival of the cluster more towards the leading edge of the subwoofer’s ETC. This will require approximate 10 ms of delay for the cluster.

The frequency and time domain of both these scenarios are shown in Figure 5 and Figure 6. 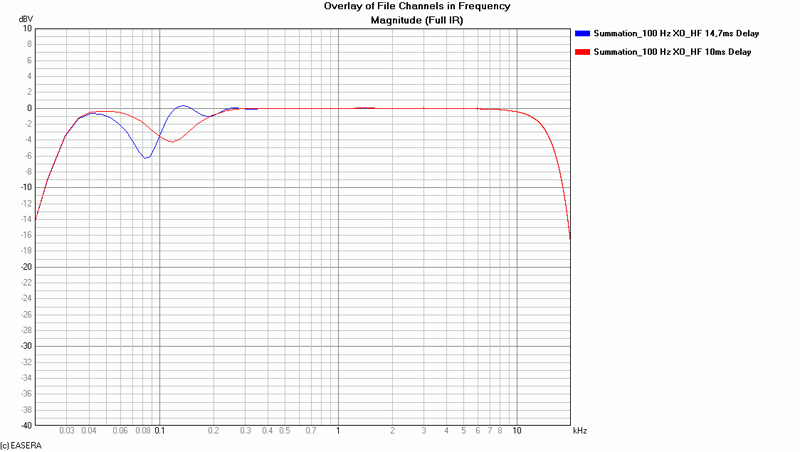 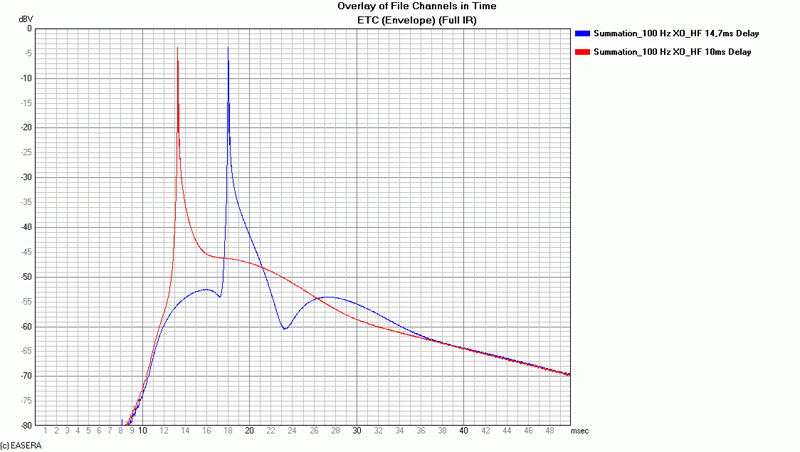 Neither of the frequency domain curves looks like what one would consider good summation (reasonably flat response). The time domain would seem to indicate that the shorter delay is closer to the ideal response than the longer delay.

We could go on guessing at different delay times in an attempt to optimize the response in both domains. Hopefully there is a better way.

Charlie Hughes has worked at Peavey Electronics and Altec Lansing, and currently heads up Excelsior Audio Design & Services, a consultation, design and measurement services company based near Charlotte, NC. As a loudspeaker design engineer, he's devised more than 60 products and has been issued five patents, and he's also helped to develop and implement a sophisticated multi-axis rotation mechanism to aid in the measurement of loudspeaker directivity. He’s also a member of the AES, ASA, CEA and NSCA.
All Posts
PrevPreviousGLP impression X4s Go Their Own Way With Fleetwood Mac
NextUniversity Of Michigan’s Duderstadt Multimedia Center Flush With API Analog ConsolesNext
Study Hall Top Stories
Explore All Study Hall