The “Power Alley” – Discussion & Solutions To The Troubling Interaction Of Subwoofers

Opposing subs can create what's termed a “power alley” - regions where LF energy is too hot. Here's a quick explanation and a few solutions.

Subwoofer cancellation is not an unusual occurence, particularly for open-air applications. Performance is not good in some audience areas. Sometimes a specific model of sub gets the blame. The underlining problem is that of the interaction between subwoofer stacks located on each side of the stage.

So let’s shed some light on this problem and remove part of that “veil of mystery” that surrounds it, due mostly to the lack of published material.

What’s Going On?
Whenever we have loudspeakers located on both sides of a stage, there is always interference between them, assuming, that is, that they carry the same signal. 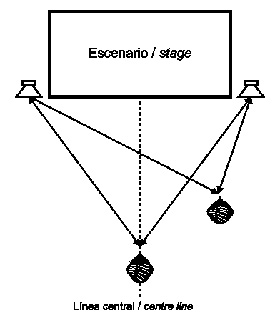 The reason for this is simple.

Comb Filtering
When two signals, one of which is delayed in time with respect to the other, are added, we get the well-known comb filter effect. This is due to destructive interference.

Figure 2 shows the resulting frequency response of summing two signals with a time difference of 7 milliseconds, which is equivalent to 2.5 meters (8 feet). The spacing between the troughs (“combs”) increases as frequency goes down.

Absolute cancellation occurs at frequencies where the time arrival difference results in 180 degrees of phase difference between the two signals, so these frequencies get wiped out.

As any frequency response anomaly, the audibility of comb filtering is a function of the width of the troughs. These are wider for the lowest frequencies, which makes comb filtering more audible for those frequencies.

Comb filtering cannot be corrected by using equalization, since there is absolute cancellation at the bottom of the troughs. Only if one of the two signals is greater in level than the other will the effect be diminished and the combs reduced in depth.

The Problem
If the time arrival difference were constant, we would simply compensate by delaying one side and go home happy. However, each listening position (except the center line) gets sound arriving from each side with a different delay between them, which means that delaying one subwoofer stack would just shift the sweet spot elsewhere.

Also, the combs are in different frequencies at different positions, which means that the frequency response is widely different through out the audience area.

The problem is not as bad for the mid and high frequencies.

First, because the troughs are narrower, and hence less audible. Second, because the zones created are smaller. With bass frequencies, one can literally walk the different cancellation areas, whereas the high frequency zones may be so small that the left and right ears do not share zones, so that the effects of cancellation are not as destructive.

Also, sources are more directive as frequency goes up. This means that when the audience is closer to one of the sides, they tend to be to some extent inside the main coverage beam of one side of the system and outside of the other, so comb filtering effects are reduced.

But with subwoofers, the situation is a nightmare. Combs are wide and very audible. Kick just seems to disappear in some places. And, since the wavelengths involved are so large (e.g., ~5 meters or 16 feet at 70 Hz), zones are enormous.

Since subwoofers are omni-directional below, say, 150 Hz, the whole audience area is within coverage of both sides of subwoofers. ALL types of subwoofers suffer from interference effects no matter what the type (direct radiating, folded horn) or brand.

The result is the “power alley”, which describes the fact that only a narrow center line of a left and right subwoofer system gets interference-free bass.