Many of us spend a lot of time obsessing about the sound of kick drums and guitar amps. We audition different microphones with the lead vocalist during sound check, then spend tons of time getting the mic and effects dialed in for the show.

But unfortunately, when it comes to background vocals (BGV), we’re too often content to simply put go-to ball mics on stands, roll off everything under 100 Hz, EQ out anything that starts to squeal, and move on. Which is kind of interesting when you really think about it, because the audience is usually focused more on vocals than the kick.

Presenting beautifully blended vocal harmonies through a PA, at least to me, is the icing on the cake of a quality mix. As a result I devote a decent amount of focus in pursuing and implementing best practices with BGV.

Likely Suspects
It starts with the right mics. We all have our favorites for vocals, and I’m no exception. My choices offer a tight cardioid pattern with good rejection at the rear, and low handling noise. Further, it’s a good idea (although certainly not mandatory) to use the same mic model for all vocalists, with the exception of lead singers and drummers who sing (more on this a bit later).

For lead singers who don’t bring their own mic to the gig or have a specific preference, select a few “likely suspects” based on their vocal characteristics and technique as a good starting point, and then have the singer quickly “audition” them. For band members that play an instrument, dynamic cardioids that offer a relatively flat frequency response or a slight rise in the mid frequencies tend to work well.

Unless a musician specifically requests a straight or a round-base stand, tripod stands with adjustable booms are a good choice because they offer more positioning options, along with good stability. Make sure the rubber tips on the legs are in place to help reduce stage noise being transmitted to the mics. Rubber mic clips can also help reduce noise transmission, and make sure each clip’s swivel is tight enough so it won’t slip during the show. I’m also a big fan of external foam windscreens on mics, even indoors. They help in reducing pops and plosives, and also keep lipstick off of the grilles. 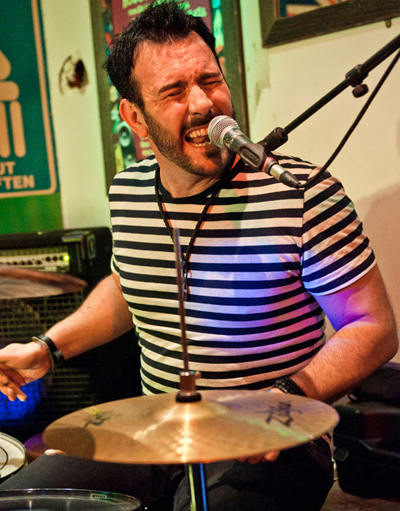 There are a lot of ways to outfit a drummer with a vocal mic, including one on a boom stand with everything out of the way.

Drummers providing vocals is where I deviate from the “all the same mics” rule. While most other musicians can simply lean in or step up to a mic, drummers are pretty much locked into position, seated and with arms (and drum sticks) flailing about. While a standard mic on a boom can work, it gets in the way more often than not.

A good option is a headworn mic like the Crown CM311 “differoid” (differential cardioid) condenser, Shure SM10A-CN cardioid dynamic and Shure BETA 54 supercardioid condenser. The key here is that the cardioid pattern helps in rejecting the drum sound. Select a rugged headset style, and make sure it’s adjusted (fitted) as well as possible to the head so it won’t slip during performance.

Also take care to page the mic cable out of the way (flailing arms and sticks, remember?). Most of these headworn units include clothing clips, so the cable can be attached to the shirt and routed down the back, out of the way. Leave some slack in the cable so the drummer can reasonably move about and not pull the clips off.

For drummers who prefer wearing headphones for monitoring, there are models that also include an attached boom mic. While many of these units are designed for remote broadcasting, some, like the Audio-Technica BPHS1 stereo headset with cardioid dynamic mic element, also work well for singing musicians. 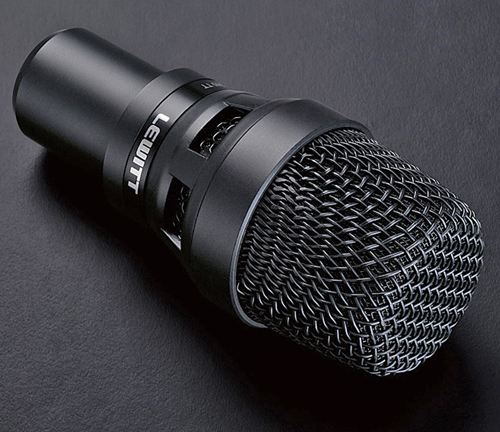 This can be further minimized by using an angled XLR connector on the cable. Another possible solution in the quest for a small footprint are mics like the Shure BETA 56A dynamic supercardioid with a built-in locking stand adapter and an integral XLR connector.

Some drummers prefer vocal mics be dropped in front of their faces via a boom. This can be accomplished by using a tall studio-style boom stand or a regular stage boom stand that’s weighed down with sandbags so it won’t tip over. A short gooseneck can then be used to drop the mic in front of the face.