A look at the functions, features and future of console DSP.

Ladies and gentlemen, step right up! I’ll be your guide as we survey signal processing capabilities of modern digital consoles.

We’ll focus on several recent trends, check out the approaches of various manufacturers, and even speculate a bit on things to come.

Diving In
Let’s get our feet wet with a look at the concept of “pooled” DSP. “Pooled” is my term for one of the two main approaches that govern various manufacturers’ allocation of DSP in their desks, the other being “designated” DSP.

You’re fee to call these approaches whatever you like (that’s what I’ve done), but the basic idea is this: The vast majority of consoles on the market have a fixed configuration – a fixed number of input channels, mix buses, matrixes, and effects slots. You know exactly what you’re getting.

However, a handful of models take a different approach. For example, the DiGiCo SD7, SSL L500 and Roland Pro AV M5000 provide a certain number of “audio paths” or “mix paths,” freely configurable as mono or stereo inputs, groups, auxes or matrixes as required by the show. Maybe we have an input-heavy performance (like an orchestra) one night and an output-heavy concert (30 pairs of in-ear monitors!) the next. No problem – changing the board’s input-output structure is as easy as loading a show file.

There are many variations on this concept. Roland’s Open High Resolution Configurable Architecture (OHRCA), which is the backbone of the M5000, pulls everything from the same pool – input channels, buses, matrices, master buses, solo buses, talkback, oscillator, etc. The Midas PRO2 defaults to six effects rack slots and eight graphic EQs, but each effect slot can be “traded in” for an additional four GEQs if more are needed. Plus, the six-band parametric EQ on each output bus can be swapped for a GEQ if desired.

The Yamaha LS9 and Behringer X32 offer eight effects rack slots that can host effects, GEQs, or any combination of the two. Yamaha CL Series models and the M5000 have a designated graphic EQ rack but allow users to swap each graphic for an eight-band parametric. All of these are examples of how flexible configuration allows us to allocate the DSP where it’s needed most.

If you’re still fuzzy on the pooled versus designated idea, let’s look at DiGiCo’s “Flexi Channels,” which are a great example of designated DSP allocation. The S21 sports 40 Flexi Channels, any or all of which can be made stereo with no loss of channel count, which is certainly convenient. (The same goes for the 16 buses.)

This means that the desk can process the equivalent of 80 inputs (40 stereo pairs), so if you’re mixing 40 mono inputs, half of that DSP is going unused. A pooled approach would let you allocate the leftovers by “cashing in” the unused processing power into additional inputs.

Likewise, some engineers (myself included) prefer not to use graphic EQs (GEQs), so a rack dedicated to graphics represents “wasted DSP” for that workflow. I applaud manufacturers allowing the ability to swap these for parametric EQs (PEQs) and encourage others to consider following suit.

As you can see from these examples, the flexibility and utility of a pooled DSP approach is obvious – just make sure you plan ahead and allow for the unexpected (which should be expected in our line of work) to avoid coming up short. You don’t want to realize too late that you need more inputs after you’ve allocated that DSP elsewhere.

Sizing It Up
Just as you shouldn’t judge a book by its cover, it’s worth investigating the relationship between the physical size of the system and the capabilities of its DSP. We would expect the two to scale correspondingly, as higher channel counts are better managed with a larger control surface. 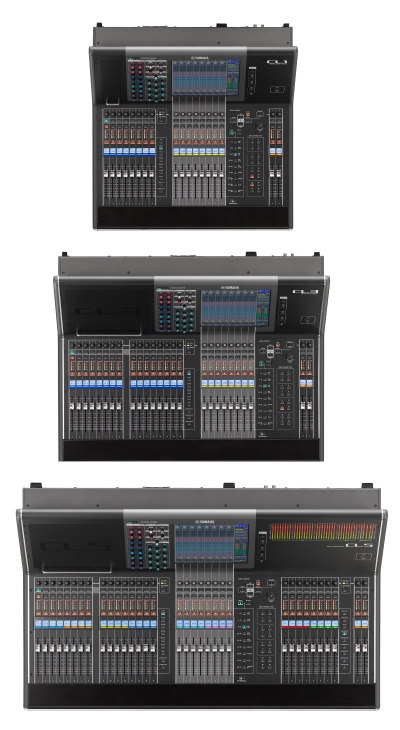 This is probably mental conditioning from the “golden era of analog,” where gigantic desk equals tons of channels (and higher risk of getting a hernia flipping it over). And, if fact this is the case for some consoles, such as the Yamaha CL Series – the CL1, CL3 and CL5 get progressively larger and more powerful. Equipped with 18, 26 and 34 faders, respectively, the DSP scales accordingly – 48 mono inputs on the CL1, 64 on the CL3 and 72 on the CL5.

However, we also see systems that physically scale as DSP remains unchanged. The Roland M5000C is physically more compact than the M5000, but both sport identical DSP (128 audio paths). Same goes for the Midas PRO2 and PRO2C. A prime example is the Behringer X32 and Midas M32 families, which run the gamut from full-size consoles to 1U rack-mount DSP cores, all with identical DSP capabilities. (Note that there are significant differences in terms of onboard inputs and outputs, but our discussion here pertains to the system’s ability to process the signals, now how we get them into or out of the mixer.)