The newest wireless system offering from Lectrosonics, the D4, is the first one I’m reviewing that does not use the UHF spectrum.

The FCC considers the ISM band to be license free, but still puts restrictions in place on how much power transmitters can have and how much bandwidth they can occupy.

However, the rules are very different than for wireless mics operating in the UHF band.

Beyond the differences in operating frequency between the D4 and the previously reviewed offerings, this system is completely different in form factor as well.

Basics
The Lectrosonics D4 System consists of only two units: the D4T transmitter and the D4R receiver. Each of the units looks roughly the same, and are exactly the same size – about 4 inches by 4 inches by 2 inches.

Obviously, this transmitter is not designed to be worn on someone’s person, but instead used as a “base station” of some kind.

he receiver is roughly the same size as many camera-mount “portable” types, being much smaller than a rack-mount receiver but certainly larger than the really small receivers from Sennheiser and Lectrosonics.

The most important feature of the D4 is probably the multi-channel capability, being that the system shuttles four channels over a single carrier.

The system uses digital modulation (like the AKG DMS700 and MIPRO ACT Digital) but according to the specifications, the occupied bandwidth is 2 MHz (!) vs. a more typical 100 to 200 kHz for most wireless systems. 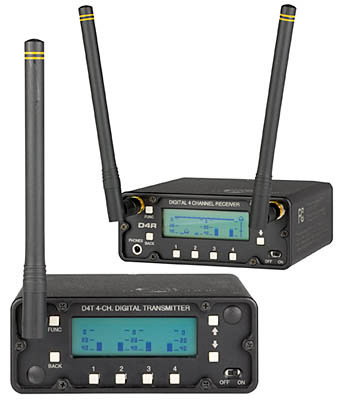 Again, this is because in the UHF band, the FCC specifies that transmitters must fit into a fairly narrow piece of spectrum, and the rules are different in the ISM band.

And being that this spectrum is license free, this means that other types of systems may be operating there, depending on your location. Wireless DMX for lighting, as an example, also uses this band.

The wide occupied bandwidth also means that the number of channels (RF carriers) that can operate simultaneously is limited. As it turns out, the D4 offers four operating channels.

Thus, in theory up to 16 audio channels can be transmitted in the band.

The transmitter and receiver in the D4 system each have four mini XLR 3-pin jacks for connecting external devices. 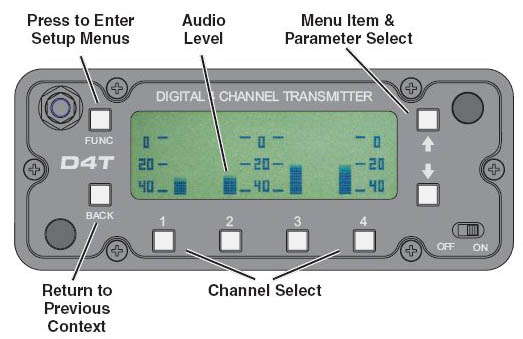 Function/features call-out for the D4 transmitter (click to enlarge)

So it seems that this is truly not a “wireless microphone” system, but more of a “wireless snake”.

Specs
The audio performance claimed by this system is impressive: 20 Hz to 20 kHz (±0.5dB), which is superior to even some of the other “pure digital” offerings. Sample rate is 48 kHz and A/D, D/A is at 24 bits.

Latency is claimed as “less than 1 ms for digital in/digital out and 2.2 ms for analog in/analog out”. Signal to noise is 103 dB, A-weighted, which seems a bit low compared to some of the other offerings.

But what is it for? 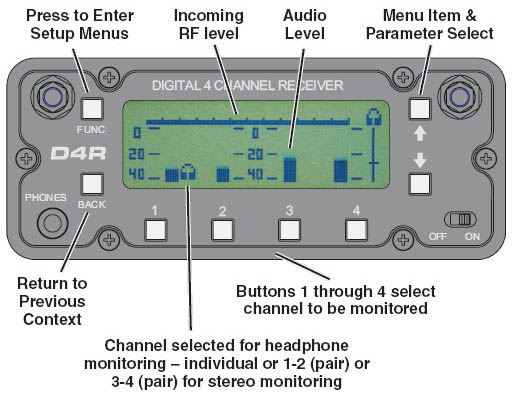 Function/features call-out for the D4 receiver (click to enlarge)

The aim seems to be for this to be the equivalent of a four-channel snake. Range is claimed as “up to 1,200 feet” but of course as we all know, external factors play the largest role in the range of wireless systems like this.

Still, this is good range and should be useful in certain applications. Perhaps this system can be used for monitor returns or some other type of signal from one place in the venue to another?

Because Lectrosonics is most well known in the film and broadcast markets, perhaps they are expecting this will be used as a camera hop system between a production mixer and one or more cameras.

I suppose time will tell.

This is pretty expensive, but compares favorably to four channels of any other pro wireless system. It does offer some unique features but it is not as flexible as typical single-channel systems.

Conclusion
This is an interesting offering from Lectrosonics although it does not at all fit in the mold of what is offered by other manufacturers. Only Zaxcom has similar wireless products.

One thing’s for sure: It will be interesting to see how such new developments play out in the live sound industry.

Find out more about the Lectrosonics D4 here.