Life On The Leading Edge

Bryan Bell has worn many hats over the course of his career: long-time front of house engineer and technician for Herbie Hancock, MIDI system designer for artists such as INXS and Neil Young, system designer for venues such as the Berkeley Greek Theatre, and an innovator in audio and MI technology whose work was ahead of its time.

Bell describes his career path as accidental – a product of a series of choices and circumstances he could never have foreseen. But it was his twin passions for music and science (and, in one case, fast cars) that led to creating instrument/audio technology for some of the most respected artists in jazz and rock ‘n’ roll.

Born in New Orleans, Bell attended elementary school in Albuquerque, NM, where his father worked as a professor, composer, conductor and director at the Center for the Arts.

At his father’s insistence, music came first and, as a child, he studied classical piano and conducting and was exposed to recording and technical theatre.

“My father’s choir did live two-track recordings in local venues and we’d edit them on high-end, professional audio equipment at home,” he says, adding that he acted as assistant engineer on his first record at age 11. He also apprenticed with the choir’s engineer, noting “That’s how I learned basic live sound, but I also learned about lighting at the Center for the Arts and at La Petite Theatre in New Orleans.”

Bell conducted his first choral group in fifth grade and sang, played piano, B3 and guitar in various bands in his teens. “But poorly,” he laughs. His preference for performing originals over covers kept him out of many bands, “but that was OK. I didn’t need to be on stage because I liked engineering so much.”

At age 15, he built his first sound system and continued to build systems and mix local bands during summers in New Orleans and while finishing high school and during his studies at Oregon’s Portland State University.

Reality Check
Bell’s interests extended beyond audio, however. In 1969, dissatisfied with the response time of traditional theatre dimmers, he invented a lighting system for a New Orleans nightclub comprised of micro switches mounted underneath a section of cut down acoustic piano keys so the lights could be changed in time with the music. Later that year, he built an electric car with a mentor. 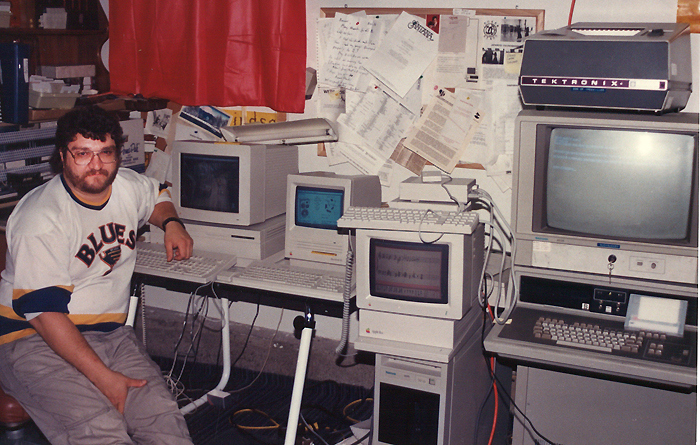 Bell in his home office in the early 1980s with his mini-comupter and early Apple computers running his first online music system, Synth-Bank.

“He (the mentor) was a commercial real estate guy and old-school ‘hacker’ with the wherewithal and disposable income to build whatever he was interested in,” Bell explains. “He got mad at the oil companies, so we went to the junkyard and bought a steamship starter motor, a tractor transmission and a junked Ford Anglia. We filled it with lead acid missile batteries weighing 90 pounds for each two volts. Technically it was a hybrid because we had a backup rototiller gas engine and generator to recharge the batteries if they ran out.”

He also owned race cars briefly while in college, but his ultimate goal was to be a nuclear physicist; a dream inspired by the fact that Albuquerque was home to various military installations, including the Naval Weapons Center for Nuclear Weapons, and where he was literally the only kid in the neighborhood whose father had a civilian job.

After becoming a Sri Chinmoy disciple in his late teens, Bell met John McLaughlin, who asked him to mix the Mahavishnu Orchestra. “Through Sri Chinmoy I was trying to learn humility,” he says. “Unfortunately, I failed at that, but I got a career out of it. At 19, I was married to another disciple, but wasn’t going to college, making music or racing cars, and John asked me: ‘What are you really doing with your life?’

“I told him that I had this ivory tower notion of solving cold fusion and running New York on a gallon of seawater, but he said, ‘Look, there are no good jobs in nuclear physics: you can build weapons of mass destruction or power plants, which, if they leak, become weapons of mass destruction. Or you can teach college kids to build power plants and weapons. So why don’t you come invent cool stuff for me and do my sound?’”