A dynamic career that includes serving as mix engineer for the New York Philharmonic, CEO of L&M Sound & Light, and more

To say Lou Mannarino has accomplished a lot as an entrepreneur, audio engineer, teacher, conductor and musician is a huge understatement. But he’s always been high energy: “My dad used to say to me, ‘I just watch you and I get tired. Can you please slow down?’”

That energy, and his approach to business, are fueled by a passion for music and audio, as well as his belief that “it’s hard to compete with someone who really loves and believes in what they do.”

Born in Staten Island, NY, Mannarino got into audio and music virtually simultaneously. “My older brother was in a band. I was a bass player – still am – and wanted to perform without relying on other people’s equipment,” he says. “When I started playing gigs I started buying gear. I was 11 years old, going to school, then working a two-dollar-an-hour restaurant job until 2 am, making 20 bucks a night, which I’d use to buy gear.”

His father, a musician himself, was heavily involved in the local scene and would pick up incoming players from the Staten Island Ferry. After asking who the people were in pictures around the house, his father answered by sneaking him into clubs in the Village. “I think it’s because my mom wouldn’t let him out of the house unless he took my brother and I,” he adds, laughing. “But I’d see artists like Chet Baker, Gerry Mulligan, Maynard (Ferguson) and Gene Krupa.”

To this day the most animated conversations around the dinner table with his father are about, “People giving it their all in music, not just performers but engineers, designers, everyone. What’s romantic and beautiful about our industry is the necessity of the different requirements and the opportunity to potentially be part of the greatest day in someone’s life.”

Starting Early
By junior high, Mannarino had amassed an impressive array of equipment, and given the lack of full-service production companies in the area at the time – only various entities providing different services like design, rentals and transportation – he began renting his gear and services to friends, high schools and colleges for everything from musicals to punk shows.

“I felt confident that people would like my work. I’d say, ‘If it doesn’t work you don’t have to pay me.’ It was a one-stop shop. My first gig was in 1976 when I was in eighth grade. I provided design, gear, labor, trucking (my dad drove me with his station wagon) and mixing. My music and audio expertise developed, and soon I actually started working with manufacturers helping with new ideas. This has been symbiotic of my whole career, leading (at present) to the new distribution company with K-array.” 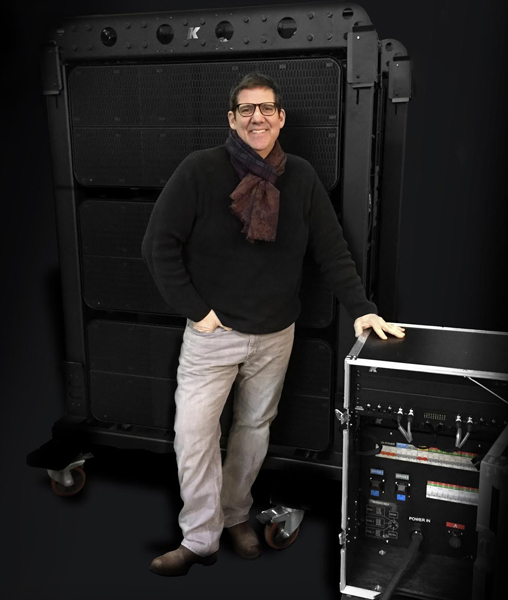 Mannarino with K-array Firenze gear at the L&M shop.

By 1980, on his 18th birthday, Mannarino officially registered the company, and since then, L&M has designed systems for diverse event spaces ranging from theatres to museums, including Lincoln Center’s Avery Fisher Hall (for The New York Philharmonic), as well as provided full lighting, video and staging services.

Early on, however, his mother felt he should also have a “plan B” and suggested studying teaching. Taking that advice, he went on to get a B.A. in Music Performance/B.S. in Music Education at Wagner College, followed by an M.S. in Music from The Aaron Copland School of Music, Queens College.

“I taught for 20 years in colleges and high schools while running my company, and loved every second of it. I raised my kids that way, but my passion was always to create,” he says. Ultimately, he chose to run L&M full time and remains as passionate about music and audio now as he was as a teenager. “I’m doing a gig this weekend, and I still sketch ideas of what I want to make and build. Over time I also learned to be an electrician and welder.”

Rather than give up teaching entirely, however, he incorporated it into his life in a way that worked, founding The Julia Music Performing Arts School in 2005. “It was a black box theatre with seven music rooms that I built with a small crew,” he explains. “I learned steel fabrication, masonry and carpentry. I wanted to continue to teach privately because I felt my life would be empty without it.” He taught bass and audio, often to students who ultimately joined L&M, but as the company grew, it took over the building before moving to a larger facility.

In 2009, the Julia Music School became Little Shop Studios, a multi-purpose, 100-person capacity, 1,800-square-foot event space with in-house AV and lighting systems. “It’s similar to Julia Music, with the addition of a theatre component, and instead of me doing all the teaching, people rent space for classes,” he says.