Oh, what an interesting time it was! Concert sound reinforcement was in the early stages of moving to where we are today.

This article originally appeared in the June 1974 issue of Recording Engineer Producer (REP) magazine, and Live Sound also ran a text-only version many years ago. It is presented here in its full glory, without editing and much as it originally appeared, to provide a fuller understanding and appreciation of that time and place and the people behind it all.

It also shows that marvelous “new” concepts like digital delays really aren’t so new at all. And, see if at least some of the names mentioned sound familiar. They should.

Shortly after one o’clock in the morning on April 6, 1974 young people from throughout the West started snaking through the gates of the Ontario Motor Speedway in Ontario, California.

By two A.M. over 15,000 people were bedding down on the grassy infield and at sunrise the crowd was well over 150,000. At ten A.M. over 200,000 rock fans began shouting their approval as Rare Earth opened THE CALIFORNIA JAM, a twelve-hour rock concert produced by the American Broadcasting Company and Pacific Presentations.

In a motel a mile away seven other groups were standing by to be flown by helicopter into the backstage compound at the speedway. They had come from around the world.

Months of careful planning had preceded the Jam and the on-site construction and installation was started weeks in advance. Miles of chain link fence had been installed. Thousand of drinking fountains and portable toilets were in place. A 45-bed hospital had been constructed in the infield. A six hundred foot length of railroad track was laid across the front of the staging area. 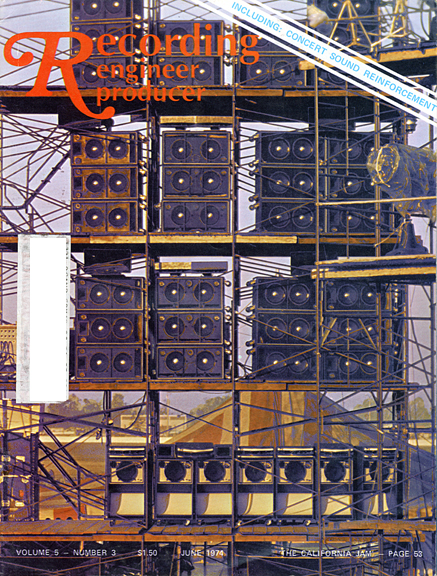 Dubbed “The Grand Funk Railroad,” the track supported three moveable stages constructed on railroad tracks. One stage was to be permanently set for the closing act, Emerson, Lake and Palmer. The other groups would alternate between the remaining two staged. While one act performed, equipment would be set up and checked out on the remaining stage for the following group. The plan was to cut the set-up time between acts to almost nothing.

The concert was to be recorded for commercial album release and videotaped by ABC-TV as material for future “In Concert” programs. To knit the entire project together the producers needed a sound reinforcement company with the know-how and equipment to saturate the broad expanse of infield, provide two-channel monitor to the stages and feed signal to the recording vans (Wally Heider Recording) and the television audio trucks.

They called in TYCOBRAHE SOUND COMPANY of Hermosa Beach, California. Tycobrahe had provided both equipment and technicians for most of the groups on previous tours and had developed a very sizeable inventory of high power sound reinforcement gear.

In the early stages the Jam producers were estimating an attendance of approximately 60,000, and the initial objective was to provide coverage only to a distance of 1,000 feet from the stage. 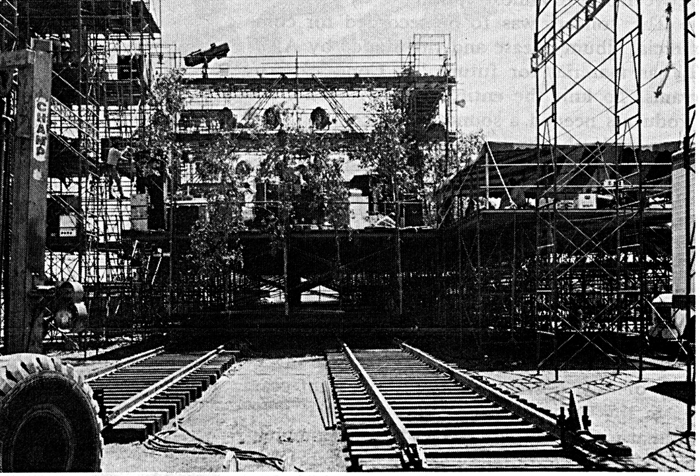 “The Grand Funk Railroad” – side view of the moveable stages.

One of the first factors considered was the placement of the staging area within the infield to take advantage of the prevailing winds. The stage was set on the western quadrant of the field so the prevailing westerly winds would carry the sound eastward across the audience area.

“We were lucky,” said Jim Gamble, Tycobrahe Vice President and Director of Engineering, “The wind blew just the way it was supposed to all day long. If it didn’t, there would be nothing we could have done to compensate… nothing.”